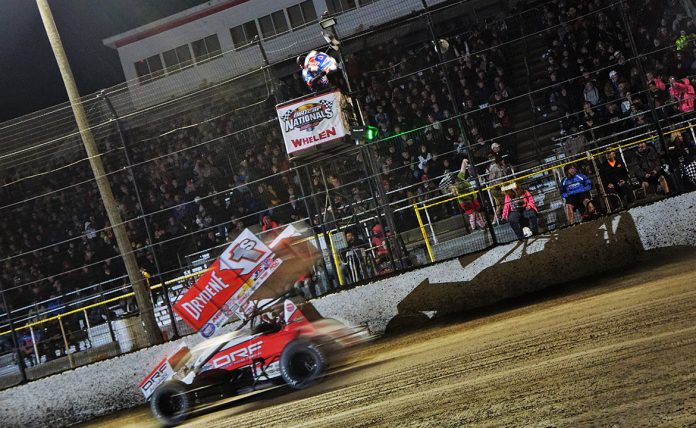 When the Series returned to racing at the iconic half-mile track in May with no fans, it was quiet and surreal. This weekend, fans will return to the grandstands in limited capacity to see “The Greatest Show on Dirt” at “The Sprint Car Capital of the World.”

David Gravel backed up his 2019 Knoxville Nationals win by winning at the raceway in May, but with drivers getting a string of six races under their belt since then, there will be a star-studded field of drivers looking to sweep the weekend.

Tickets for both nights can be purchased by clicking here. If you can’t make it to the track, you can watch all of the action live on DIRTVision.


BACK TO BACK ATTEMPT FOR GRAVEL: When the World of Outlaws returned to racing for the first time after about a two-month hiatus, David Gravel, of Watertown, CT, picked up the historic win at Knoxville Raceway in May. He’ll shoot for two more this weekend at the half-mile track in his Jason Johnson Racing #41.

With his win at Knoxville this year, and at the 2019 Knoxville Nationals, Gravel became the first driver to win back to back races at the track since 10-time Series champion Donny Schatz did so in 2017. He earned his first podium since that win during the last weekend’s race at Beaver Dam Raceway, giving him and JJR the needed confidence and momentum to try and sweep the weekend at Knoxville.

SWEET ON A ROLL: Brad Sweet, the reigning champion from Grass Valley, CA, and his Kasey Kahne Racing team have found their groove with four wins in the first 10 races of 2020. He swept the weekend at Beaver Dam Raceway last weekend and reclaimed the points – now 28 point ahead of second-place Donny Schatz.

Sweet won the second night of the Brownells Big Guns Bash at Knoxville last year but has struggled at the track since. He finished sixth at the Knoxville Nationals last year and finished ninth at the raceway in May. However, after his dominating performance at Beaver Dam, he’ll be poised to park his NAPA Auto Parts #49 back in Victory Lane at the iconic track.

SCHUCHART EYES REDEMPTION: Logan Schuchart, of Hanover, PA, had the best start to his career in the first nine races. He won two races, claimed the points lead for the first time in his career and finished outside the top-five once and never outside the top-10. A split-second error during the last race at Beaver Dam Raceway ended his run.

After hitting the wall and finishing 21st, Schuchart fell from first to third in points – 36 points behind Sweet. While he’s never won a World of Outlaws Feature at Knoxville, it’s become one of his best tracks and could be the perfect place for he and his Shark Racing team to rebound. He drove his Drydene #1S car from 22nd to second at the Knoxville Nationals last year and finished third at the track in May.

STEWART FINDS HIS RHYTHM: After losing his ride at the end of 2019 and entering this year with no solid plan, Shane Stewart, of Bixby, OK, currently finds himself fourth in points after a string of four top-five finishes in a row. He’s put the Indy Race Parts #71 in contention to each the past few weeks and will go for his first win at Knoxville Raceway since 2008 this weekend.

Stewart ran the first three races of the year in a second Sides Motorsports car. When racing resumed in May at Knoxville, he found a new home in the #71. He finished 16th in that race, but Stewart said he and the team learned what adjustments they needed to make for him to feel comfortable. In the six races after, he collected five top-five finishes and six top-10 finishes – never finishing worse than sixth.

PITTMAN HUNTING FOR MOMENTUM: Since finishing fourth at Knoxville in May, Daryn Pittman, of Owasso, OK, has struggled to find his way back into the top-five. He and his Roth Motorsports team have found themselves in and out of the top-10 each race. But with four top-five finishes at Knoxville in a row, the raceway could also be the perfect place for him to rebound.

A win at Knoxville would be Pittman’s first and also his first of 2020. He led eight laps at the track in May and never finished outside the podium there last year. Before driving the #83 for Roth last year, Pittman said he never fared well at Knoxville. Now, he has a package with the team that could bring them both a big win at the historic track.

BROWN ON HOME DEFENSE: While Brian Brown is from Grain Valley, MO, Knoxville Raceway has become a home track for the three-time and reigning track champion. He picked up his 50th career win at the raceway over the weekend – tying him for fifth on the track’s all-time win list with three-time World of Outlaws champion Sammy Swindell.

One of those 50 career wins came last year when Brown beat the Outlaws during the first night of the Brownells Big Guns Bash. He’ll be on the hunt to do so again this weekend in his self-owned #21 car.

Gibson started working for the Series full-time in 1995, selling programs. After an interview with announcer Bobby Gerould in 1996 about life on the road with the Outlaws, Gerould thought Gibson had the voice and charisma to be an announcer. He gave Gibson the chance to call a Heat Race at Keller Auto Speedway, which impressed the World of Outlaws enough that they hired Gibson as their first official announcer.