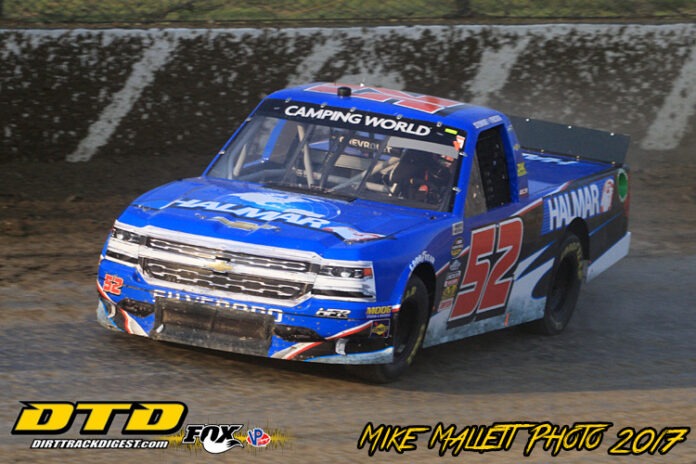 KNOXVILLE, IA – In the late 1800s, just 45 miles southeast of the state capitol in Des Moines, a small farming community in the unassuming town of Knoxville carved out a half-mile oval at the Marion County Fairgrounds for what was originally intended to be a horse racing facility.

In 1901, the facility staged what’s touted as the first automobile race at an Iowa fairground, and perhaps the country, featuring a pair of vehicles that were on display at the fair.

While the account of the day told a tale of a race that was “nothing remarkable,” the first chapter in the storied history of Knoxville Raceway was written.

Since then, Knoxville Raceway has become synonymous with sprint cars, an abundance of chapters have been recorded, while the venue and town have been affectionately designated as “The Sprint Car Capital of the World.”

Flash forward over a century from that 1901 summer to modern day as Knoxville Raceway and the NASCAR Camping World Truck Series will co-author a new adventure. NASCAR’s 3,400-pound purpose-built race trucks will take on the venerable dirt oval as NASCAR and sprint car fans come together for the Knoxville Raceway Corn Belt Weekend.

For the first time in its prestigious history, Knoxville Raceway will host a NASCAR National Touring Series event when the NASCAR Camping World Truck Series races at the famed half-mile dirt oval on Friday night, July 9, 2021. The event will take place on the eve of the Corn Belt Clash, formerly the Corn Belt Nationals, non-winged sprint car race which will shift to Saturday, July 10.

Originally, the two-day non-winged event, featuring the USAC Sprint Car National Championship Series and POWRi War Sprints was scheduled for July 9 & 10. Now, the Corn Belt Clash will be moved solely to Saturday, July 10 and will continue to boast a $20,000 top prize for the sole non-winged sprint car event at the Sprint Car Capital of the World. The track’s 410 winged sprint cars series will also compete on July 10.

“With the help of NASCAR, Knoxville Raceway is ready to pen another chapter in the history that’s been created at the most legendary dirt track in the world,” said Knoxville Raceway’s Race Director John McCoy. “We’re honored by the faith NASCAR has placed in our facility and staff to raise the already high bar in delivering the best racing to our fans. We’re proud to join NASCAR in bringing Knoxville Raceway to a national television audience and to showcase what sprint car fans have known for generations. There’s no where like Knoxville.”

Tickets are now available to purchase online or by calling the ticket office at 641-842-5431. Suite availability, camping and parking information will be announced via the track’s website, Facebook, Twitter and Instagram platforms as it becomes available. Broadcast times and networks will be also be announced at a later date. To receive up-to-date information about the NASCAR Camping World Truck Series race at Knoxville Raceway, visit our website.

The event will be promoted in cooperation with North Carolina-based Spire Holdings.

“Thrilled doesn’t quite capture what it means to have the opportunity to showcase what dirt racing fans all over the world already know – that Knoxville Raceway is the greatest and most prestigious dirt track in the world,” said Spire Holdings’ Vice President of Strategic Initiatives Joey Dennewitz. “Some of the most famous and accomplished race car drivers in the world have built their resumes on the hallowed dirt of Knoxville Raceway. We’re grateful to NASCAR and the Marion County Fair Board for helping us bring this vision to life.”