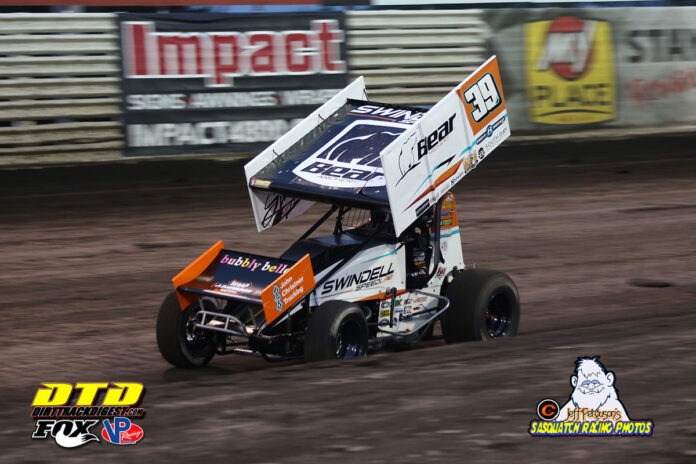 Daryn Pittman sat with a smile on his face during the post-race press conference, but had things turned out a little bit differently, that smile could have been much bigger.

Pittman led 23 of the 25 laps during the A-Main which was only good enough for a second-place finish for his Swindell Speedlap No. 39.

Pittman summed it up afterwards with a laugh as he said, “The last two laps sucked.”

Gio Scelzi hounded Pittman for the final few laps by continuing to stay right off of his right rear tire.  Pittman kept him at bay on the bottom.  Unfortunately, he was forced to make a choice on the final lap heading into turn one as a lapped car had taken his line on the inner part of the speedway.  He made the decision to go to the top.  That proved to be the wrong choice.

“There was a lapped car going into the bottom of one,” commented Pittman.  “Honestly, I changed my mind 10 times going down the fronstretch about what to do.  The only thing I knew I wasn’t going to do was follow the lapped car on the bottom.  I was honestly hoping to have a late entry to the top to get some air off of him and get him tight and hopefully screw him up enough to get off of two with the lead.  I felt like whoever got off of turn two the best was going to win the race.”

The bad part for Pittman was Scelzi got the better run off of two to take the lead.  Pittman went to the middle after the checkered and realized that was where he should have run going into one on the final lap.

“He obviously got turned and crossed back over me,” mentioned Pittman.  “In hindsight, after the checkered, I hit the middle really good.  I kind of wish I hit that and let the lapped car have the bottom.  Coulda, woulda, shoulda…at the end of the day we got beat.  As a driver that is hard to swallow when you lead the whole race and lose it on the last lap.”

Pittman had one last chance heading into turn three to regain the lead, but once again the lapped car impeded his progress by staying in the line that he had preferred all race long.

“I think he was going to get used up if he was any more in way, regardless by one of us,” said Pittman.  “I didn’t know what he was going to do going into three.  He had a lot to do with where I was going.  He had the bottom covered and Gio had the middle covered.  At that point I couldn’t enter on top and drive around him.  I dove in super hard on the bottom hoping the lapped car would move up in front of him.  It just didn’t work out.”

Henderson from Eighth to Third 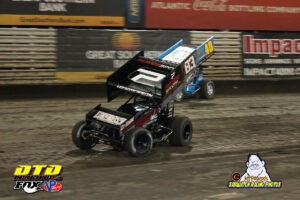 Justin Henderson made some good progress in the A-Main on Saturday night advancing from the outside of the fourth row up to third.  Unfortunately, he was never able to get close enough to Scelzi and Pittman to challenge for the win.  Like Pittman, he used the bottom to make moves to get to the front.

“I felt pretty good early on,” cited Henderson.  “I should have stuck to the bottom longer.  The bottom lane is the money lane here.  It was also easy to mess up down there, and if you messed up down there, the penalty was huge because you hung out for way too long.

He admitted that he was too conservative after getting to third.

“I had guys right behind me,” stated Henderson.  “I was kind of in protect mode once I got to third, which is a bad place to be.  You got to race your race and race the guys in front of you.  I forgot that for a few laps.  That was my fault.  I made too many mistakes to get from eight from the lead.”