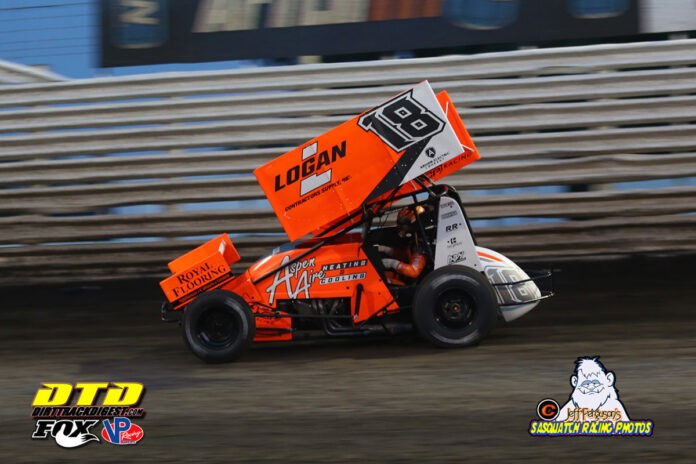 Gio Scelzi may have been one of the youngest drivers in the field at 19 years of age, but he drove like a seasoned veteran on Saturday night.

The Fresno, Calif., driver worked over Daryn Pittman late in the 25-lap race to lead two laps and the most important one as he came to the checkered flag first to win the 31st edition of the My Place Hotels 360 Knoxville Nationals.

“It’s unreal,” said Scelzi during the post-race press conference.  “I don’t know what to say.  My car has been so good this whole year.  I feel like I’ve made so many mistakes as a driver that I’ve never been able to finish the deal.  Two nights in a row winning with two or three or go.  I think anybody could have driven it honestly.  Bernie (Stuebgen) does such a great job.  I’m truly having fun racing again.  The last couple years have been the highest of highs and the lowest of lows.  To win this is unreal.”

Scelzi drove the KCP Racing No. 18 to three wins in the last week as he won the tune-up 360 show last Saturday night before winning again on Friday night during preliminary action at the Knoxville Raceway.  He then got it done when it counted on Saturday night.

Scelzi was consistent all week long.  Whatever line he felt was best, he stuck to.  During preliminary night action he ran the middle and the bottom before making the choice to run the top on Saturday night as Pittman had the bottom protected.

“The bottom had been so dominant,” stated Scelzi.  “I ran the bottom and the middle my whole prelim night.  I had never thought about the top.  I committed to it throughout the race.  I was better than him early and I feel like he was better than me half way through.”

He stayed off of Pittman’s right rear nearly taking the lead at the halfway point before a red flag for Brian Brown negated his progress.  He went back to the top when the race went back to green while changing his approach just slightly in turns three and four allowing him to stay within striking distance of Pittman.

“I thought his wing was kind of far back and he started getting free off exit,” stated Scelzi.  “I could sort of diamond three and four and get to his bumper, but I never could do anything with him. I needed to get to traffic, that was only way I was going to pass him.”

Traffic did come into play on the final and most important lap.  Pittman’s line was blocked on the bottom forcing him up the race track.  This was the difference maker.  Scelzi made his move to complete the pass to win the race in turns one and two.

“When he slid me in one, I thought he won the race,” mentioned Scelzi.  “I just barely got the thing turned enough to get back underneath him and that was it.  I figured he’d drive back underneath me or drive through the middle, but at that point, there was nothing left.”

There may have been nothing left, but it was enough to give Scelzi the $15,000 victory.