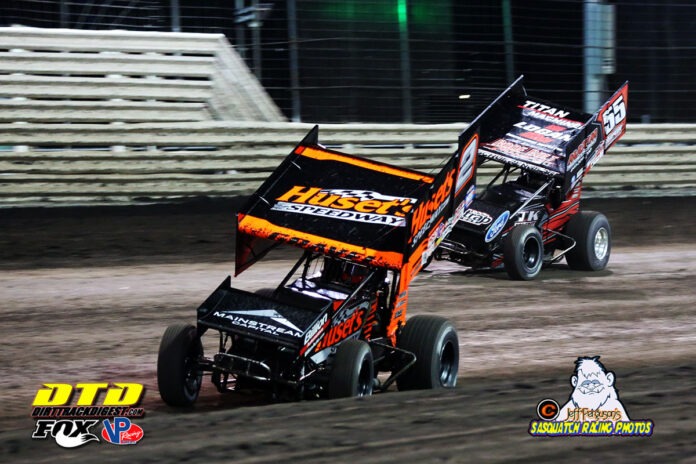 There is not doubt that David Gravel hopes he can keep the streak alive of the last three Capitani Classics.   Brad Sweet, Gravel and Kyle Larson each won the Capitani Classic before they went on to win the main-event at Knoxville on Saturday night in the finale.

“That is a good stat,” said Gravel when reminded of the recent history.  “Hopefully we keep that rolling.”

Gravel’s night got off to strong start with a good qualifying effort which setup the rest of his night.

“It was so important to qualify good,” stated Gravel.  “I didn’t have the best pill draw.  Hitting the bottom in qualifying, that is another hard thing to do.  The most stressful time around this place is to try and hit the bottom in qualifying.  If you miss it, you are out to lunch.  Luckily, we were able to do that tonight.  We were able to put the whole night together.”

In the 25-lap main event, Gravel went off from the inside of the third row.  He was able to work the bottom of one and two really well while utilizing multiple lanes in turns three and four.  He did everything he could to avoid the top in turns one and two.

Gravel took the lead at halfway by going three-wide with the slower car of Kasey Kahne and the leader Cory Eliason in turns one and two.  He stuck his No. 2 on the bottom to take the top spot off of turn two.

“I felt good on the bottom, there was a lot of grip down there,” commented Gravel.  “I was just going to run that as hard as I could.  Sometimes it got me in trouble in lapped traffic because they were three-wide literally fighting for the bottom and I’d follow them into the corner.  That is probably not the smartest move.  I knew if I at least hit the exit I was going to have a good drive off.  I just didn’t want to put myself in too bad of a position.”

In the closing laps, Gravel found himself struggling to get around Paul McMahan.  McMahan was focusing on keeping his car near the bottom which was the same line Gravel was attempting to run.  As Gravel’s pace slowed, Eliason closed back on him.

“I felt like I struggled to get past Paul (McMahan),” said Gravel.  “I think I winged out a couple times.  Man, if you entered a little too high you’d lose the right rear and sit there.  That is probably what happened.  I made a couple mistakes there.  It was tricky.  I passed him in lapped traffic and I’m sure he had chance to pass me as well.”

The win adds the long list of accomplishments that Gravel has at Knoxville.  He’s won the Nationals, the Capitani Classic and had a qualifying night with a perfect score.  He continues to be good at Knoxville.

“My first time ever here in a 410 weekly race I challenged Mark Dobmeier,” said Gravel.  “I ran like fourth and was in the hunt.  It was a place that suited me well.  I feel like I’m really, really good on the bottom here. I feel like Brad (Sweet), Donny (Schatz) and I are the best to run the bottom here.

“If the track is fast around the top, you know Gio (Scelzi), (Brian) Brown and Kerry (Madsen) are probably going to be the fastest guys.  I feel like not everybody is perfect.  I feel like I can run the bottom and middle and move around in there.  You just try to learn off the good guys and try to make the right moves and decisions in lapped traffic.”

Gravel is taking Monday off before returning to action on Wednesday night for qualifying action.  He’ll be look to keep the streak alive for a fourth consecutive year, but he’ll need to have a good night on Wednesday if he hopes to do so.  Who knows what will happen, but he’s off to a good start.