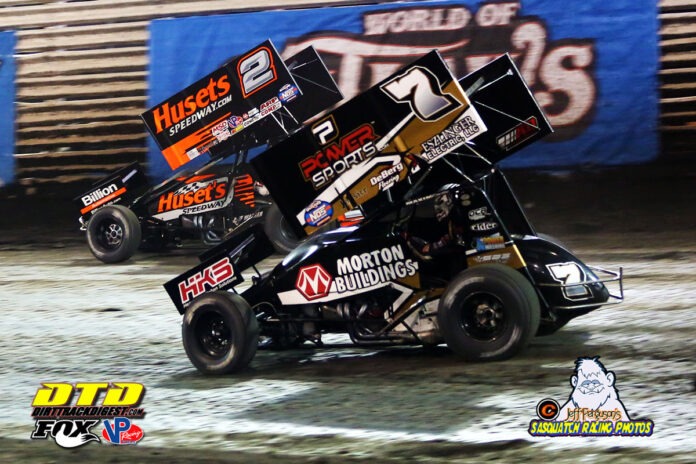 The defending Knoxville Nationals champion just keeps rolling. He picked up the Capitani Classic on Sunday night and now he has another preliminary night triumph on his resume as he won the 25-lap feature event on night one of the 60th Knoxville Nationals.

Even though he went out 47th in time trials, Gravel put down a competitive lap that placed him in the top 10. He did the hard part transferring from his heat race before starting the feature from sixth. He took advantage of slower traffic to drive by race long leader Justin Henderson for the lead with a handful of laps to go.

“Knoxville has been just a good place to me and I’ve always felt competitive here,” stated Gravel. “Usually when you win on Sunday, it gives you good confidence moving forward, but tracks can change and a bad pill draw can make you struggle all night. Making it through the heat is such a big deal, it makes the A-Main a bit of a relief. Since we qualified well and made it through the heat, I felt the pressure was kind of off going into the A. We’re just going to roll with it. It’s all about runs and momentum.”

Gravel avoided the top in turns one and two like the plague on Sunday night. That was not the case Wednesday as the top proved to be the dominant lane throughout much of the race fore everyone not named Donny Schatz. He used the top to track down Henderson before using a slide job, and a little help from traffic, to take the lead.

“I knew the race was coming to an end there, but I really couldn’t catch him before that,” commented Gravel. “He slid that lapped car and really broke his momentum. Luckily there was lapped traffic because if he had clean air the whole time, he would’ve won that race. But, that’s why we do this and that’s why we run all 25 laps to get to the lead.”

Although Gravel is the defending winner, he’s no longer with the Jason Johnson Racing team that he was with when he won the event. This is a whole new experience for Gravel along with his crew led by Cody Jacobs. He doesn’t feel different as a driver, but he knows winning on Saturday will come down to decisions they make at the last moment.

“I don’t think it feels any different, it’s a different team,” said Gravel. “Obviously, I know how to win the race now, but it takes a lot to lead lap 50. The track just changes so much and you have the opportunity to make changes at the red flag, and you can either put yourself in the ball game or take yourself out of the ball game right there. There’s a lot of decision making in the Nationals, and you have to make the right one. I’ve been up front at the break and made the wrong changes and went backwards after it. This race is a very hard one to win, and you just need to be on your game.”

So far, for two nights, Gravel and company have made the right decisions. The question left to be answered is, will they make the right ones come feature time on Saturday night to make him a two-time winner of the Knoxville Nationals?