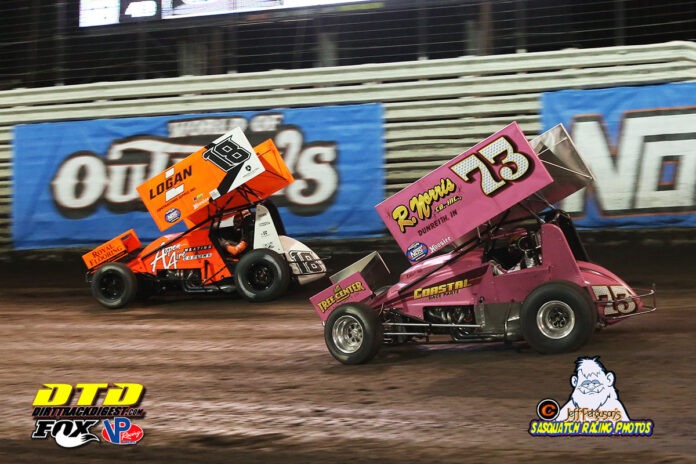 Coming off his 360 Knoxville Nationals win, Gio Scelzi continues to ride the wave of momentum at the Knoxville Nationals. The California driver left Wednesday night as the high point man so far after an impressive second place finish in the A-Main event.

Like Gravel did in winning, Scelzi took care of business. He timed inside the top five and transferred from his heat directly to the A-Main giving him the worst spot in the starting line-up for cars in the inversion. He started eighth. He was methodical from there working forward to finish second behind Gravel at the checkers. He racked up 487 points to lead the pack before Thursday night’s action.

“I love this place,” said Scelzi of Knoxville Raceway. “This is definitely a track I’ve taken a liken to since I’ve started to come here. I feel like I’ve been coming here for a long time, but it’s only been about four years. Nothing has really changed. We’ve just been building chemistry and fine tuning on our stuff. I love this race track and I think they do a great job here, and this car and 410 were awesome. I think this is just a confidence race track, when you can bomb it down there when the pace is that fast and you’re pretty much wide open around the top, I think confidence is just a big part of it.”

Confidence is key now for Scelzi. Scelzi made his first Knoxville Nationals at the young age of 16 back in 2018. Back then, he was elated just to make the field. Now, he looks at himself as a contender for a title on Saturday night.

Knoxville Donny was on His Game

Donny Schatz hasn’t had the nearly the success he’s accustomed to having in a season. Schatz is a 10-time winner of the event in his career. Sunday night in the Capitani Classic he struggled to find speed. Wednesday night, that wasn’t a problem.

Schatz was on his game even though he pulled a late pill. He went out 41st of 49 cars and timed sixth quick. That gave him a chance to have a solid night. He did just that finishing in third in the A-Main. Now the team has something to work with has he goes for his eleventh on Saturday night.

“Getting a good run qualifying that late was pretty rewarding I thought,” stated Schatz. “Getting through that first heat race as well, the Wednesday heat races are always tougher, so to get through that qualified was a blessing. We’re going to have to make some changes if we want to win on Saturday. I’ve been coming here a long time and I think I know a few things that we need to do, but I think we’re in one of the best spots we’ve been in in a few weeks, and hopefully we’ll be in position to win in a couple of days.”

Unlike the top two in front of him, Schatz drove nearly the entire 25-laps on the bottom as everyone else pounded around the rim. It was the Schatz of old as he faded a bit early before coming on in the second half of the race to make up ground on the top runners. He passed Justin Henderson for third coming to the checkered flag.

“You can go back years and look at where this race has been won on Saturday night, it’s great that it’s tricky,” mentioned Schatz about the bottom of the speedway. “I haven’t been in a position where I can stick down there like I want, just takes a little to try and figure things out. I fell back a little in the beginning, and I know exactly why. I knew we would have that happen, just a matter of managing how far the fall was.

“Once we got going, we could rifle it off in there. From lap to lap the track changes, but that’s what makes it fun and makes it kind of interesting. We can sit down as a group and see some of the things, and we got a team car going tomorrow night, and we can see if they figure out a few things for trying to roll a little bit better. If Kerry can get down there and roll the bottom like that, I feel like we’ll be a step in the right direction.”

If the team did indeed figure something out, that might signal some trouble for the rest of the field. This just may be the year that Schatz regains the crown.