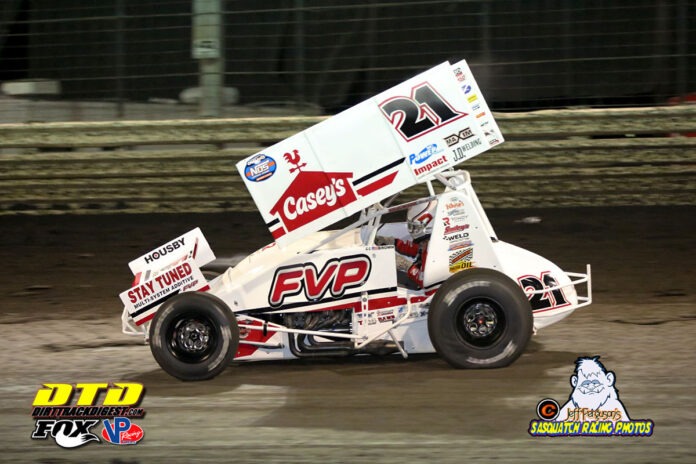 Mid-way through the season Brian Brown made a crew-chief change on the No. 21 bringing his uncle Danny Lasoski on board to assist the team.  That change has paid immediate dividends.

Brown dominated the Thursday night portion of the 60th running of the Knoxville Nationals with a car that was on rails beating both Kyle Larson and a stout Brent Marks.  Brown showed the form that nearly won him a Knoxville Nationals title between 2011 and 2013.

“Any time you can race with guys like Kyle and Brent, it shows where you are as a team,” said Brown.  “Any time you can beat these guys, even with like a lap head start, it’s a sense of relief. I’m just proud of my whole team.  We ran second to Donny for a few years and I just figured it would be like that every year, but we’ve barely been in the show recently.

“It’s awesome to be able to relax and breathe going into tomorrow, and everyone’s confidence is gaining more and more.”

Brown and the teams were handed a lightning quick surface after Mother Nature decided to drop precipitation on the facility late in the afternoon.  Hot laps didn’t hit the speedway until 9 p.m.  That had all the teams thinking about how to prepare for the night’s action, including Brown.

“I honestly didn’t think it was going to be as good of a race as it was,” stated Brown.  “I wouldn’t have been upset if they canceled it and ran it tomorrow because I didn’t know how good it was going to be, but I think they did a fantastic job with the surface.”

Earlier in the season Brown set a new track record at Knoxville.  He thought that was going to be the hot setup for the night.  Eventually, the team made a few changes that allowed him to time in the top 10 which is crucial to gain much needed points towards making Saturday night’s A-Main.

“I got to overthinking myself early in the night,” said Brown.  “I put the same setup in that I used to set the track record earlier in the year thinking that was how it was going to be, but when I hot lapped it I didn’t feel that great.  In qualifying I spun my tires coming off of four a little both laps. I think we ended up eighth, but I was hoping I’d get pushed back to eleventh because that would put me third row outside for the heat.”

It worked out as he got through the heat and earned the fourth starting spot for the A-Main.  He had a couple of poor starts at the drop of the green, but those were called back for various incidents.  He didn’t make the same mistake on next attempt moving to second before taking the lead on lap two as he put a slide job on Sam Hafertepe Jr., in turns three and four.

“When we fired, my motor would stutter and then light up the tires trying to get up to speed,” mentioned Brown.  “When you do that, here comes everyone like a pack of wolves and it made for some hectic starts. I had a good opportunity to think about things under that red about how I was just getting attacked on those first two starts, so I stayed up a little more on the straightaway and had a good head of steam entering turn one.”

Brown went on to lead the rest of the way for the preliminary victory while doing something not many can say they’ve done in beating Larson.

“I wouldn’t say I held them off,” said Brown.  “They didn’t line up behind me with two to go on a restart.  We didn’t have a chess match at the end. He started 21st (Larson) and ran second, well he says he started tenth, but I started fourth and he ran the B.”

Regardless of how he got there, Brown now as the confidence in himself and the team that they can be a threat coming into the finale on Saturday night after he locked his No. 21 into the show..

“I feel like the team we have, we are building every day, and the confidence is getting more and more,” commented Brown.  “We have a chance to win Saturday night, and I’m very excited about that.”