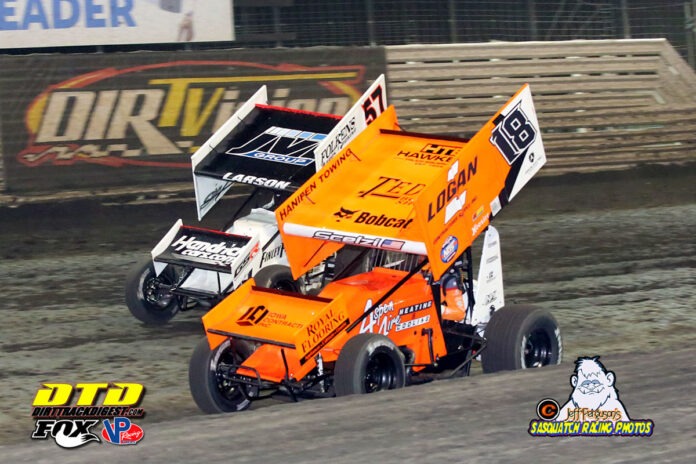 It’s a sad day as the 60th edition of the Knoxville Nationals has come and gone.  Some drivers will leave Iowa as depressed as I am as they wonder what could have been while others make the trek down the road all smiles.

1. Paul McMahan was a scratch from the B-Main prior to action after his crash on Thursday night.

2. Zeb Wise replaced him. He was allowed to start the car at the tail of the B-Main.

4. Logan Wagner was a scratch from the E-Main after wrecking hard on Friday night with Austin McCarl.

6. During pre-race ceremonies the Australian, Canadian and American national anthems were sung.

7. The Budweiser Clydesdales made an appearance at the track prior to racing action.

10. Austin Miller was the first caution of the night which occurred during the E-Main. He was running second when he slowed with mechanical issues.  He was running in second at the time of his misfortune.

11. Jason Sides captured the checkers in the E-Main.

12. The first red flag of the night came on lap six of the D-Main when Chris Martin flopped lightly over on his side. Noah Gass was also involved.

13. Jack Dover was the D-Main winner.

16. Scott Theil qualified from the D-Main to make the C-Main. His car wouldn’t fire for the start of the race.

17. Terry McCarl was the first car out of the C-Main when he slowed on lap three.

18. Wayne Johnson got a right rear flat while leading the C-Main on lap 12.

20. Marcus Dumesny, of Australia, first Knoxville Nationals ended with an eight place finish in the C.

22. Carson Macedo won the B-Main going away with Kerry Madsen in second.

23. The finish for third and fourth in the B-Main was four-wide at the checkered flag with Bayston, Sheldon Haudenschild, Cory Eliason and the lapped car of Josh Baughman all together at the line.

24. The final transfer spot changed hands multiple times in the final laps of the B-Main.

25. Bayston missed out by inches at the line at the checkered flag as Haudenschild just beat him.

26. Haudenschild was sideways at the line which forced him down into the infield after he took the checkers.

27. Jac Haudenschild made his final Knoxville Nationals appearance finishing 24th in the B-Main.

28. Jac was interviewed after the B-Main to loud cheers from the crowd.

32. Indiana was represented by Tyler Courtney and Justin Peck.

35. Abreu was the first caution of the A-Main when he went spinning on the fronstretch on lap 27.

36. He had some help from Kerry Madsen that sent him around.

37. Brown flipped on lap 30 of the A-Main when he hopped the cushion in turn one.

38. Courtney slid sideways to avoid the contact with Brown and also flipped. Neither were injured, but both of their Nationals were over.

39. Eliason got a piece of a flipping car forcing him to head to the work area with damage. The team changed the top wing, but other damage ended his night.

40. Sheldon Haudenschild pitted with a flat right rear. He rebounded to finish in 10th.

41. On lap 35, Kerry tried to pull a slider on Sheldon in turn four. Kerry was unable to clear him and ended up sideways before saving it and continuing on.

42. David Gravel’s had a fuel nozzle come loose in the feature. His engine ended up expiring while he was running in the third position.

43. Logan Schuchart made serious progress in the second half of the race coming from 12th to finish in fifth at the checkered.

44. Macedo was the highest finishing B-Main driver in the feature. He finished ninth from 17th.

45. Brent Marks was docked two spots at the break for his crew not being clear when the second horn sounded.

46. Marks was fourth at the time of the penalty. He ended up being the highest finishing Pennsylvania regular when he came home in sixth.

47. Brooke Tatnell was also docked two positions. He went on to finish 12th.

48. Danny Dietrich was the first car out of the A-Main finishing 24th after starting 16th.

49. Aryton Gennetten won the Rookie of the Year Award after finishing 14th in the B-Main.

52. There were only three appearances by the Pella Motors two-seater Sprint Car during the night.

60. The 2021 edition of the Knoxville Nationals was a sellout on Saturday night with over 22,000 fans in the grandstands and the infield.