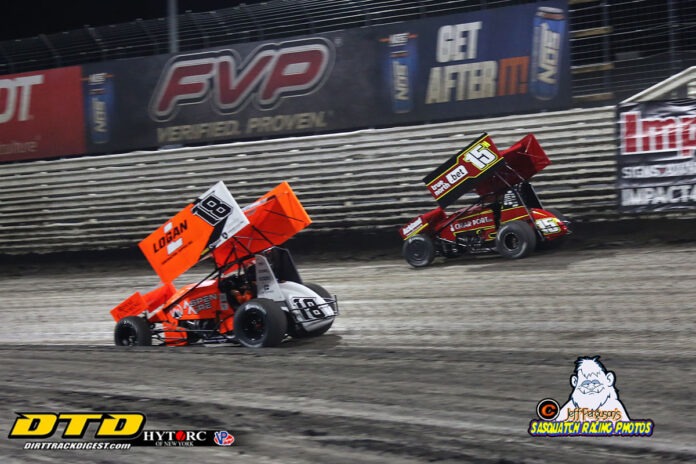 Sam Hafertepe Jr., accomplishments are well known in the world of 360 Sprint Car racing. The Sunnyvale, Texas, driver is a multi-time ASCS National Tour champion among other accomplishments. There is one thing noticeably missing from his resume, a 360 Knoxville Nationals title.

After Thursday night’s opening round of the 32nd edition of the event, 2022 may be his year.

Hafertepe dominated the 20-lap A-Main running away from defending race winner Gio Scelzi and seventh starting Aaron Reutzel for his second win of the season at the Knoxville Raceway. He also earned a nice $3,000 check.

“This is what we did last year,” said Hafertepe. “We won the prelim, but we didn’t beat guys like this on our prelim night either. It was good. Gio was class of the field last year and to have him inside of me and kind of dominated the race we did; I was really happy about our performance. I don’t know how far out we were on him at the end.

Hafertepe’s car was on point in the feature. He was able to utilize all three lanes on the speedway. It didn’t matter whether he had to run the top, middle or bottom, he could. That allowed Hafertepe to get the lead from his fourth starting position on lap seven. He powered by Thomas Kennedy off of turn two with a perfectly executed slide job.

What made Hafertepe so good throughout the race was that he was able to run the middle lane when he had to. Other drivers were married to the top or bottom of the speedway, Hafertepe had the use of the middle lane in his back pocket.

“We’ve raced here quite a few times and you learn how to race here differently,” he said. “Ten years ago, you couldn’t run the middle. Donny Schatz could, but nobody else could. Now, that is a really common line where you run. Honestly, when you commit to it, you just have to be confident in what you are doing. I feel really good about being able to run the middle and a lot of guys can’t. Hopefully we can put that to the car on Saturday night and get a win there then.”

Hafertepe only had one restart to contend with which occurred early in the race on lap seven. He wasn’t worried as Scelzi and Reutzel had yet to crack to the podium. Kennedy and Garet Williamson were behind him for the green flag.

“I just passed the 24 (Williamson) and the 21 (Kennedy),” said Hafertepe. “They were still behind me on the restart. If it was Gio or Reutzel that would have lined up behind me I would have had to hit my marks really well. With those two guys we showed that we were faster than them at that point in that race. I wasn’t really worried. I kind of went into one and if I hit, I hit it. If I didn’t, I didn’t. If I had the 18 or the 8 behind me I would have been really worried if I didn’t hit my marks.”

After the first night, Hafertepe put himself in a strong position for Saturday night’s finale by virtue of acquiring the necessary points to put him third in the overall tally so far. There are several quality cars that will qualify on Friday night, but he feels like he has a car that can compete with them. Especially since the team has run Knoxville on a frequent basis this season.

“I’m really happy and comfortable with my race car,” said Hafertepe. “I know you are going to have a couple of better guys like Larson and Brown going tomorrow. Our stuff is just as good as theirs, especially in the 360 deal. We’ve had a handle on that for quite a while. Their 410 programs are better than ours, but we are working on that too. When we get to the 360 deal, I feel really confident.

“I feel like we have a really good race car and our motor package is good. Our whole combination works well there. I never really worry about that. I worry about our 410 more. That is what we have focused on that more this year. By focusing on that more it has made our 360 program even better here.”

Gio Scelzi was good enough to work his way to a runner-up finish on night one. It took him several laps to dispose of front row starters Kennedy and Williamson. By that point, Hafertepe had checked out.

“It just took me a little too long to get going,” Scelzi said. “With the 360s you almost forget how hard you can run them around the bottom. With the 410 you get a lot of wheel spin and the car gets all out of whack down the straightaways. With these things, you are just stuck. Sam just beat us, it’s pretty simple. He was a lot better than we were. He raced smarter than I did and got through the traffic better than I did. It’s nothing to hang our heads about. Overall, it was a good night.”

Scelzi kept his No. 18 on the bottom throughout the early laps. A decision he regretted as the race wore on.

“I almost stayed on the bottom too long, too early,” he said. “It kind of came in at the end when the grease blew off. I got too bottom dependent. Those guys were kind of sliding around in the middle and the top. I should have seen it and moved up and got to them then drove under them. The bottom definitely cleaned off a lot in three and four. The grease blew off and you could hold it almost wide open.”

Aaron Reutzel ended the night as the high point man with 487 points. Reutzel timed fourth, finished second in his heat and finished third in the A-Main. It was an impressive run from the seventh starting position.

“That is what you want,” said Reutzel. “You have to qualify good and get through your heat if you want to have any chance on Saturday. That’s what we did. To come out third is a good points night. It depends on what guys do tomorrow, hopefully this is good enough for the first or second row.”

The early race restart for Reutzel as he hadn’t made much progress prior to the yellow flag. He regrouped and got things rolling over the final two thirds of the race. He was able to pass both Kennedy and Williamson to put his No. 8 into the third position.

“I was trying to go where they weren’t and make some speed up,” he said. “Luckily, I caught them at the time that they both moved out of the line I was running. It worked out well. That restart really played in our favor. I think I was cruising around about seventh and I was able to get some guys on the restart.”

Shane Golobic’s night started out well with a lap of 16.299 in qualifying to earn him 200 points. Unfortunately, that was the peak of his evening.

At the start of the first heat Golobic was going to the outside of Makenna Haase when the duo made contact. Golobic’s No. 17 hopped her right rear Hoosier sending him hard into the outside wall in turns three and four. Golobic flipped several times. He got out and walked away from the crash.

The car, it was a total write-off and his night was over.

Heat race victories were taken by Scelzi, Chase Randall, Parker Price-Miller, Corey Day and Devin Kline…Nathan Mills flipped in the B-Main. Mills got together with a spinning Scott Bogucki …Sye Lynch was unable to record a time trial lap. He raced from the C-Main into the B where his night came to an end…Ryan Leavitt won the C-Main and made it all the way up to 11th in the B-Main… 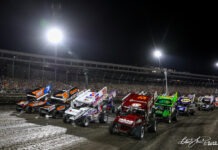