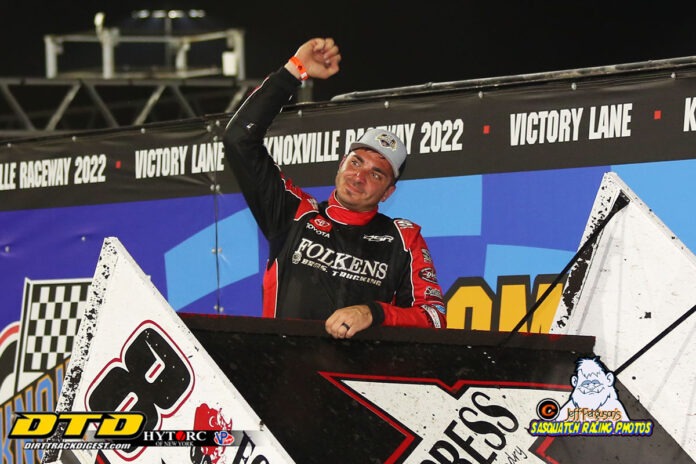 Aaron Reutzel has been a regular at the Knoxville Raceway throughout the 2022 campaign.  He came into the 32nd edition of the 360 Knoxville Nationals second in the track’s 410 Sprint Car point standings.

Running weekly at the Sprint Car Capital of the World has given him extensive knowledge of the track and an incredible notebook to work with.  Reutzel parlayed that information into the biggest win of his career as he took home $15,000 for the win on Saturday night and another $15,000 in lap money to earn a $30,000 paycheck for 30-laps of action.

Usually, knowledge is power.   Reutzel felt like Saturday night that may have been a detriment even though he held off a late charge from Sam Hafertepe Jr., to hit paydirt.

“Any time you are fast here it is a plus,” said Reutzel.  “This is a hard place to be fast at and to get a hold of.  Being so good here so early kind of hurt us.  I think we over-thought things a bit.  Overall, we still put ourselves in a good position.  The race played out perfectly for us where it went green to checkered. I felt like I was able to set my own pace, get in lapped traffic and hide a little bit.

“We’ve been really good on simple stuff.  Tonight, we tried to over-evaluate it and we tried to get too trick with it and got a little too tight.”

Through the middle portions of the race Reutzel simply checked out after starting on the outside pole.  As did that, Hafertepe was making tracks coming up through the field.  Reutzel knew that Hafertepe would be coming.   With a handful remaining Reutzel knew Hafertepe was close, but he stuck to what worked and it paid off.

“I think with about three (laps) to go I looked up and saw that the 15 was in second,” he said.  “They had me in the camera view and it was zoomed way out and I figured it was him.  At that point, I wasn’t going to change my line.  There were some lapped cars coming up on the bottom and I was just hoping to get to the lapped cars, but I figured if I just stayed there that if he was coming on the bottom I would have one chance at a chop or something. I just tried to stay in the easiest line to run and kept glancing to my left.

“I wasn’t surprised to see him get to second, I figured he was doing it on the bottom.  He won earlier this year on the bottom and getting out in the middle, I figured he wasn’t up there pounding it.  I was a little nervous, but I wasn’t going to abort what I was doing.  It worked that long. At that point I just tried to make the best laps I could.”

Making the win for Reutzel more special was that he gave his Ridge and Son Racing owner Brian Ridge the biggest win of his car owning career.  The team paired up last season after Reutzel lost his ride at Roth Motorsports.  Ridge allowed Reutzel to set a plan for the season and so far, so good.

“This is really special for me,” said Reutzel.  “Them taking the chance with me, giving me the chance that they did.  Not just the opportunity to drive their car, but to set the schedule that I want to run, not going up and down the road and grinding all the time.  We run here most of the time and hit some of the bigger shows, but mainly just run around here.  A team of their quality usually doesn’t want to do something like that.  They want to go out on a tour.  It means a lot to me to get this win for him.  He’s been close a few times.  I’m happy for them.  It’s a big win for them and they truly deserve it.”

Sam Hafertepe Jr., was undoubtedly the fastest car in the A-Main.  He raced from seventh, without a caution, to within a few car lengths of Reutzel as the final checkered flag fell over Saturday night’s feature.  He was fifth 10 laps into the race, third with 14 complete and up to second at the halfway point.  He just simply ran out of time to get to Reutzel at the end.

“They went there and tilled the top and everyone was really equal the first 15 laps it seemed like,” said Hafertepe.  “Once the middle started getting slick, I felt like we had a really good car.  I was catching patches of moisture across the middle most of the time and making a lot of hay.  I think that’s where we were our best.

“To come thru there and pass the quality of cars we did is impressive for us.  I’m happy about the finish.  You want to win, but when you get a guy like Aaron out front, he’s not going to make a lot of mistakes.  He probably runs the curb about as good as anybody. I knew he wasn’t going to falter too much up there.”

Hafertepe tried to turn the wick up in the final few laps, but that cost him as he beat up his Hoosier tires.  He spun his tires a few times and that took away any hopes of getting to Reutzel. He knew he had to go as the laps were quickly winding down once Reutzel came into his sites.

“We were gaining on him pretty quick there from 10 to about five to go,” he said.  “We sucked him up pretty quick.  Then we got to four to go and  looked up at the board and I saw he was in four and I thought ‘man, I got to catch him a little faster than this if I’m going to make a mount on him.’  I’ve raced with Aaron a long time and kind of know his tendencies and stuff.  I knew if I left the door open at any rate where he saw my nose I’d be in trouble.

“I tried to press it a little too hard coming to three to go and I spun them up coming off of four and I really think that honestly ruined the attempt.  I spent the next three laps over driving.  We were still catching him.  Once spin tires out here you are toast.  The line I was driving was hard and tricky, but at the same time it was paying off.  Like I said, I made those mistakes at the end and he won the race.”

Clint Garner was the best of the rest on Saturday night finishing in the final podium position.  Garner battled for much of the race with fellow Knoxville regular Lynton Jeffrey.  He bested him at the finish to get third.

“To race with this caliber of drivers is comfortable,” said Garner.  “They are all so good at it.  They know boundaries and I feel like I do too.  I felt like the underdog coming into this race.  I’m grateful to be sitting up here.  I love racing against guys that know how to do it.”

On the intimal start of the D-Main Seth Brahmer got turned sideways before the flagstand sending him backwards down the front straightaway.  Heavy contact was made with Ryan Bowers.  Brahmer was lucky to walk away unscathed after the heavy impact between the pair.

The restart didn’t go much better.  Rusty Hickman got together with another driver heading into turn one causing a massive crash.  Kelly Miller, Tony Rost, Ben Brown, Clayton Christensen and Sam Henderson were all involved in the incident.  None of the drivers in the crash were able to continue, but no one was hurt.

Colby Copeland went on to win the D-Main.

All Star Circuit of Champions regulars Tyler Courtney and Parker Price-Miller finished in spot one and two in the B-Main.  Price-Miller made an impressive run from eighth to second in the 18-lap race.

Anthony Macri was also quick with his No. 20.  Macri advanced from the inside of the seventh row to come home sixth at the checkered.  Unfortunately, he was two spots short of making the finale.

Chase Randall Price-Miller each advanced nine spots in the A-Main.  Randall drove from 18th to ninth while Price-Miller advanced from 22 to 13th…Kyle Larson was a non-factor in the final outcome mustering an 11th place effort after he went off 16th…Tyler Courtney was the first car out of the A-Main finishing 24th…Defending winner Gio Scelzi finished 10th after rolling off the A-Main in eighth…The 50/50 on Saturday night paid $3,573.