“Obviously winning at Knoxville during the Nationals is a pretty awesome accomplishment,” said Alen. “With Logan winning yesterday, and then me starting second tonight, I really wanted to win the race. That way we could say that we swept the prelim nights. That means a lot to me. To also have my dad’s 1a back in victory lane here in Knoxville is pretty special to me as well.”

Allen was challenged throughout the feature distance. He got a nice jump at the start to take the lead as third starting Brad Sweet was working past pole starter Zeb Wise. By lap nine, Allen was mired in traffic with Sweet rapidly approaching. Allen kept Sweet at bay for most of the distance. Sweet pulled a slide job on lap 21 in turns three and four attempting to secure the lead to no avail.

“I had a really good pace going I felt like at minimum,” Allen said. “A couple times I had to go low to pass a lapped car and I felt good down low as well. I guess sometimes the bad side of leading the race is you don’t know what the guys behind you are doing. If they’re really close or what they’re seeing and what lines are picking up. Knoxville seems to change out its lines through the course of the race. I felt good. I guess the only bad part of the thing was Brad passing me right there, but other than that, it was pretty awesome.”

Allen admitted that this was the biggest win of his career.

“I would say this is the biggest win for me,” said Allen. “I’ve been terrible at Knoxville in some ways. As far as feature results, it definitely has not been ideal. I had good moments and felt good on the race track in different situations. For me, I’ve been hopeful to get in a situation to see how well I can drive the track.

“With winning some races this year, I have some confidence of how to manage and race, not get overly excited and those sorts of things. Tonight was a test for me. Can I put together 25 good laps? Not just run one line, get through lapped traffic, hit the bottom well, use my feet well, judge cars and lines to the best of my ability. I think I capitalized on all that. I’m pretty proud about it. I ‘m sure I could sit there and pick at tiny little things. It happened and that’s what counts.”

Former Knoxville Nationals winner Brad Sweet came close to scoring win, but settled for second. Sweet challenged Allen, throwing every trick in the book at him only to come up short. He did have the lead briefly, only for Allen to drive back by him to take the win.

“I’m not horribly mad,” said Sweet. “I think if my car was working better, I would have been able to make the pass and hold on to it. I think it’s tough in lapped traffic. It’s easy to lose three-seconds here, but it’s not easy to gain it. It only takes a couple of straightaways and a couple of lapped cars to change you off your line.

“He (Allen) did a good job. His car was working good in some spots. He did a good job making it more difficult for me changing his lines up, especially on the bottom of three. It was hard for me to get any run on him off the top. My car was pretty good.”

Sweet didn’t have the highest point total, but he was good enough to lock himself into a starting spot in Saturday’s finale.

“It kind of feels like a weird Nationals with the way the points are,” said Sweet. “I think we are locked into the A, not in the best spot, but it’s 50 laps. We’ll keep working on the car.”

Carson Macedo went off from the outside of the third row. In the non-stop feature he was able to gain on the top two as they battled through traffic. Had they been slowed up by traffic a bit more, Macedo may have been able to sneak by them for the win.

“They were battling really hard,” said Macedo. “I thought I might have an opportunity there. When I got to third, I was pretty a long way back. I was able to reel in the lead duo there. I felt like my car was pretty solid in certain spots. I could run the top really well, but I couldn’t run the bottom like I wanted to or sweep through the middle like you really needed to drive by the both of them.”

Like Schatz a night earlier. Macedo was able to sneak through and make the feature out of his heat race. Had he not done that, things would have gone much, much differently for the California driver.

“If I wouldn’t have made it out of the heat I would have started pretty deep in the B and probably wouldn’t have made it,” said Macedo. “It is very important to get out of that heat race. It is probably the most nerve-wracking heat race of the season by far. The way the track has been the last couple of nights the bottom is fairly greasy and the top is pretty narrow, not that far away from the bottom. So Hard to make huge ground in a heat race, I think a lot of guys think they are set up for an extremely good night but then they miss the show. I’m lucky I’m not one of those guys.” 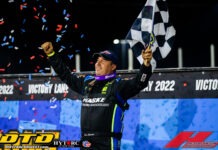