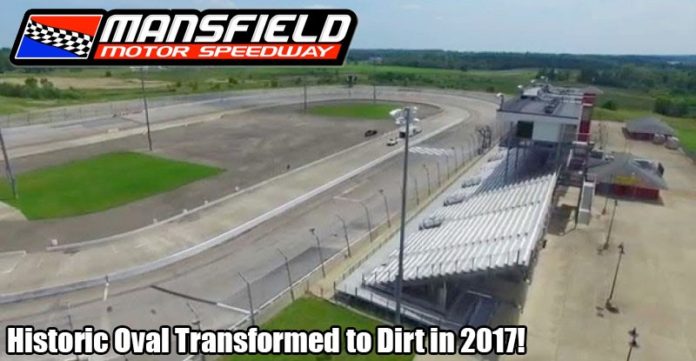 The deep, rich and long history of racing in Mansfield, Ohio dates back to 1959, when the original track – Mansfield Raceway – first opened as a 3/8-mile dirt track.  It was converted to an asphalt track in 1999, renamed (Mansfield Motorsports Speedway) and has remained asphalt ever since.  The speedway saw its pinnacle moments from 2004-2008 where it held NASCAR Truck Series events and drew standing room only crowds of over 20,000 in attendance.

The .44-mile oval will be transformed into a dirt track in 2017, with many changes and upgrades anticipated before opening in the spring. “Dirt racing in Ohio is strong – and overall, across the country, it is in a much better situation than asphalt.  Mansfield is located in the heart of some of the best racing in the country and with a venue as nice as this [Mansfield], it is a shame it has not been put back on the map like it deserves,” said Cody Sommer, President of Mansfield Motor Speedway.

“Mansfield was once nationally ranked in the top 5 of the greatest race tracks in the country and I don’t see any reason why it can not return back to that very quickly,” Sommer added. The state-of-the-art facility features a safer barrier, twelve luxury suites, a complete race control room, 7,200 aluminum bleacher seats with chair backed/ covered reserved seats for 2,000 spectators. The hillside seating option adds a unique experience for around 2,000 attendees – bringing total capacity to nearly 10,000.