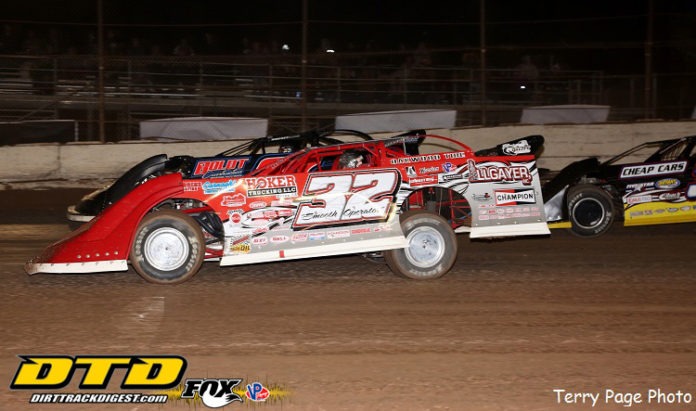 All is not lost though, as the Saturday rain has set up a Sunday double dip for the event featuring Super Late Models, USRA Modifieds and X-Mods.


After the rescheduled event is completed, the facility will be cleared for re-entry to the 11th Annual Wild West Shootout finale that fires off at 5:00 p.m.

A $5,000 winner’s share is up for grabs for the Super Late Models in Sunday’s makeup event with the Bakersfield Karting Experience raising the stakes of Sunday night’s finale to $12,000-to-win.

Through four of six scheduled rounds of action, Bobby Pierce, Ricky Thornton, Jr., and Travis Schulte are atop the point charts in their respective divisions.

Pierce has topped three of four Black Diamond/Club 29 Super Late Models presented by M&W Transport features thus far and can lay claim to a $100,000 bonus from Keyser Manufacturing by winning both feature events on Sunday or $50,000 if he wins one of them.

Though Pierce has dominated victory lane, his Wild West Shootout points lead is just 13 points over Chris Simpson.   After a third-place finish in the series opener, Simpson has reeled off three consecutive runner-up finishes.  Jimmy Mars is a distant third in points, just four markers ahead of Round Three winner Billy Moyer with Rodney Sanders rounding out the current top five.

Ricky Thornton, Jr., has won three of four MVT/Border International USRA Modified presented by Arizona Differential features to open up a 61-point lead over Dustin Strand while Travis Schulte has a mere one-point advantage over Rusty Kollman in the RHR Swag X-Mods presented by Barnett Harley-Davidson that have offered up four different winners in as many events.