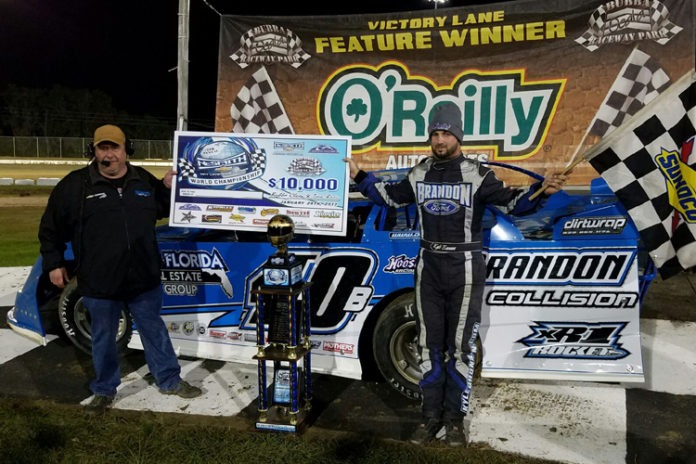 OCALA, FL – The state of Florida has been the home of the Chevrolet Performance World Championship for the NeSmith Dirt Late Model Series since the inaugural season of the series. Sunshine State drivers always turn out in top form in hopes of keeping the World Championship title and the $10,000 payday in state. In recent years, however, Mother Nature has tried her best to put her name on the win list as weather has delayed or postponed the event in recent season. 2017 would be no different as consistent rain showers moved over Bubba Raceway Park on the original race date of Saturday January 28th pushing the event back one day to Sunday January 29th.

43 cars entered on Saturday before the postponement, with 37 returning for action on Sunday. RockAuto.com Pole Qualifying got the afternoon started with 4 groups to qualify. At the end of qualifying the home state of Florida was represented well with Brandon, Florida’s Kyle Bronson setting overall fast time in his Brandon Collision sponsored Rocket Race Car and putting his group as Heat Race #1 to race for the pole starting position. After heat race action, it was fellow home state driver “Magic Man” Mark Whitener of Middleburg, FL picking up the win in Heat Race #1 and setting himself on the pole for the 100-lap feature.

With the home state of Florida being well represented, frequent competitors on the RUSH Late Model Series made it known that they had made the long trip from the northern United States in search of a $10,000 payday and bragging rights. Mike Pegher Jr. piloted his #RJ1 Rocket to fast time in his group and a heat race win placing him on the outside front row for the feature. The third group was paced by Virginia’s Tyler Bare, son of legendary Late Model ace Booper. Bare would have to settle for second in the Heat, as Friday night’s feature winner Jamie Perry would drive his P4 machine to victory and claim the third starting spot for the feature. Veteran Tennessee driver Ronnie Johnson would set fast time for the fourth and final group, but a young driver with a familiar last name to those in the dirt racing world, Hudson O’Neal, would pick up the heat race win and roll off from the fourth starting spot. O’Neal, whose dad Don is one of the top drivers in the Super Late Model ranks, was referred to as the “New Deal” referencing his father’s moniker “The Real Deal”.

After the top 16 drivers were transferred into the feature from heat race finishes, two B-Mains were contested to take 4 more drivers into the starting field for the $10,000 to win World Championship. Florida drivers Blake Spencer and Ken Monahan would take the two transfer spots in B-Main 1, while Corey Almond and 14-year old Tyler Clem would take B-Main 2’s transfer positions. Following the B-Mains, the top 12 drivers from Bubba Army Winter National points from Thursday and Friday night would move to a Last Chance Qualifier that would take the top 2 finishers as the final starting spots for the feature. Kentucky’s Victor Lee and Mississippi’s Marcus Minga would take the final two Last Chance spots to fill the World Championship starting field.

After a quick once over by the Bubba Raceway Park track crew, the field took to the speedway for pre-race ceremonies and driver introductions. Once the festivities were complete, and the fans gave the drivers the command to fire engines, it was time to get down to business. As the Bubba Raceway Park pace vehicle exited, Whitener and Pegher would lead the field to green for 100-laps of action. The attention given to the track surface proved to be worth the wait as fierce action began as soon as the green flag fell.

Elbows up racing would be the pace until lap 8 when the first of 10 caution flags flew, for the slowing car of Alexander City, AL driver Jason Britton. The Dixie-style double file restart would re-establish the hard-core racing when the caution lights would flash again on lap 19 for the slowing 17 of Logan Roberson. Whitener remained at the front of the field controlling the race and navigating lapped traffic quickly with Bronson and Pegher in pursuit before a lap 38 caution for the 56jr of Katy, TX driver Colton Horner who exited with mechanical issues. The field raced again with Whitener maintaining his lead, but not running off in the distance as he had on previous restarts. A lap 48 caution brought a great run to an end as third running Trent Ivey of Union, SC had to make a pit stop after contact flattened his left rear tire. This setup a couple of quick cautions as the 6 of Blake Spencer spun on lap 50, before a multi car accident on lap 54.

A lap 68 caution for the slowing P4 of Jamie Perry setup what would be some of the tensest moments of the 100-lap event. At the restart, the 111 of Pennsylvania’s Max Blair had made his way inside the top 3 from his 11th starting spot, and unlike the previous restarts Whitener was having to hold off Blair and Bronson. Blair would prove too much to handle as he made a move to the inside of Whitener exiting turn 4 to officially take the lead on lap 72. But the caution would quickly wave on lap 73 after contact between Doug Horton and Brandon Sheppard. On the ensuing restart, racing amongst the top 5 had reached a fever pitch with contact, rubbing, and slide jobs occurring rapidly. This would continue until a lap 90 caution would stack the field up for a 10 lap shootout to the finish. As the field raced back to life under the green flag, Whitener would make a move to the inside of Blair off turn 2 making contact with the left front of Blair’s Rocket Race car. Meanwhile, Bronson was ready to pounce as the first and second place cars began to race each other hard. As the field came off turn 4 to put lap 91 on the scoreboard, Blair made contact with Whitener and then came to a hard stop against the outside retaining wall just past the start finish line. Blair would suffer too much damage to continue, and Whitener’s machine would have damage to the rear spoiler and back of his ULC Motorports machine.

The damage to Whitener’s machine would show up as on the ensuing restart he would struggle to hold off the hard charging cars at the front of the field. Bronson would get by Whitener and Pegher would follow suit. With the laps winding down, the 17B Sallack Well Service Rocket being driven by Brandon Sheppard found a line that he and his machine liked as he marched through the field and got by Pegher for the second position. Another impressive run had been quietly mounted throughout the race as the 14-year old Tyler Clem had quietly and perfectly taken care of his equipment and moved into the top 5 from his 20th starting position. As the Sunoco Race Fuels checkered flag waved it would be Bronson able to keep Sheppard at bay, with Pegher coming home in third, Clem in fourth, and a stellar run from Hudson O’Neal to round out the top 5 finishers.

A special THANK YOU from the NeSmith Dirt Late Model Series goes out to all of the competitors who made the trip to Ocala for the Bubba Army Winter Nationals. We appreciate their efforts in being there and working through the weather delay. AND we could not THANK the Bubba Raceway Park staff and fans enough for their continued support. Fans witnessed what many were heard saying was one of the best 100-lap races they had ever witnessed. A tip of the hat to the track crew, Bubba Clem, Tom Bean, Lisa Mamph, Ken Snyder, and the rest of the BRP staff for their efforts.

The RockAuto.com Winter Shootout Series for the NeSmith Dirt Late Model Series makes a quick return to action as they will be at the East Alabama Motor Speedway Saturday February 4th for a $2,500 to win, 50 lap feature as part of the return of the Groundhog Classic. For more information about that event please visit the official site of the East Alabama Motor Speedway at www.EAMSDirt.com.

You can also follow NeSmith Racing on all of your favorite social media outlets as well:

Sunoco Race Fuels is the Official Race Fuel of the Series.

Cruise with the Champions is the Official Vacation and Rookie of the Year Sponsor for the Series.

David Smith Carburetors is the Official Carburetor of NeSmith Racing.