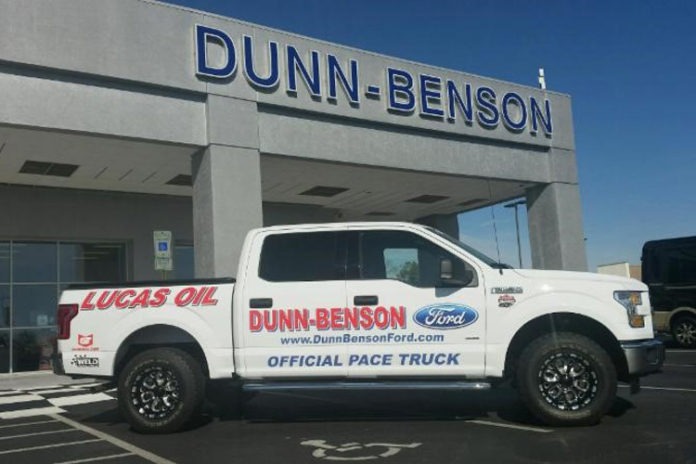 BATAVIA, OH – Officials of the Lucas Oil Late Model Dirt Series are proud to announce that Dunn Benson Ford will again be the “Official Pace Truck Provider.” The 2017 Dunn Benson Ford F-150 will lead a band of the nation’s top dirt late model drivers to the green flag at 55 events across 22 states.

Owned by Carlton and Kemp Lamm, Dunn Benson Ford is proud to be one of the premier Ford Dealerships in the country for over 25 years. From the moment you walk into their showroom, you’ll know their commitment to customer service is second to none. Dunn-Benson Ford strives to make your car buying process as quick and hassle free as possible. Dunn Benson Ford can deliver anywhere in the United States! For your next purchase of a new or pre-owned vehicle, call Dunn-Benson Ford at 888-713-7293, or visit them online at: www.DunnBensonFord.com.

“We’re thrilled to have Dunn Benson Ford as the Official Pace Truck,” said Rick Schwallie, Lucas Oil Late Model Dirt Series Director. “Their partnership has been instrumental in helping to grow our organization. Above all, their friendship and the relationships we’ve built among their staff is second-to-none. We look forward to continuing our working relationship with Dunn Benson Ford in 2017 and beyond.”