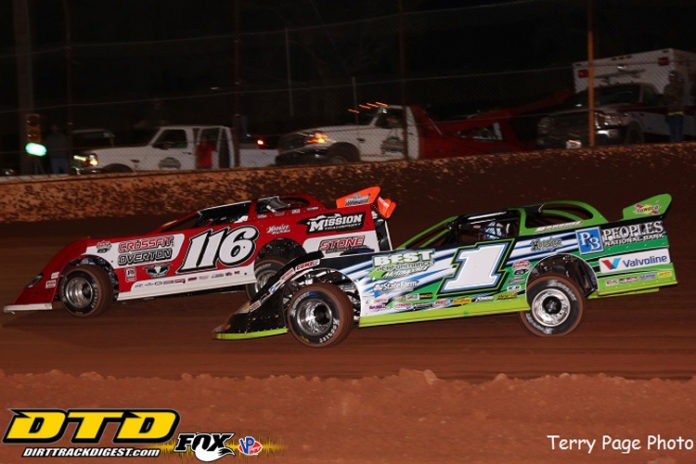 “I don’t know what to say right now. Thanks to all of fans for their support. It [switching race teams] was one of the toughest decisions I have ever made. I have always wanted to work with Randall [Edwards]. I can’t thank these guys enough for this opportunity. It’s great to win the second night out in this car. Everything is new on this ride and we are just trying to get acclimated to it,” said the 28-year-old in Lucas Oil Victory Lane.

Rebounding from the previous night – where Richards had started on the front row, but faded to sixth at the finishn- he was elated for a better outcome. “I made an adjustment that I didn’t realize I had made last night and it definitely cost us. I was kicking myself afterward because I had done it by accident. We’ve really had a good car all weekend, I’m glad that I didn’t make the same mistake tonight. I can’t thank these guys enough for having faith in me!”


Bloomquist held off Overton at end after making some contact during the race. “We weren’t too bad tonight. We needed a little more time for practice. We should have been here Thursday for practice. We just need to get here sooner. We got close tonight, but there’s a few things I would have loved to have changed.”

Overton was pleased with his weekend at Golden Isles Speedway – notching a third-place finish after his victory on Friday night. “To run how we did against these guys says a lot about our team. We would have liked to have won tonight as well. To race with Bloomquist for most of the race was fun and we tried plenty of times to get around him but he did what he needed to do out there.”