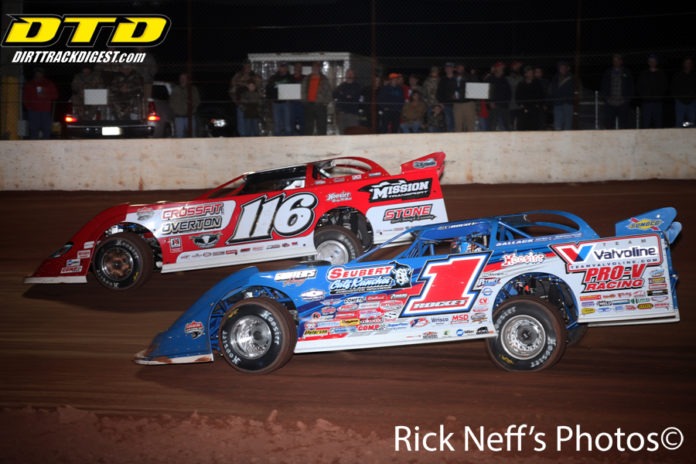 CONCORD, NC – The World of Outlaws Craftsman® Late Model Series 2017 season opener at Screven Motor Speedway in Sylvania, Ga. is familiar terrain for Georgia natives Shane Clanton and Brandon Overton. The track is nearly a stone’s throw away from the drivers’ hometowns when considering the number of fans who traveled from 42 states last year to see the first green flag of the season at the red clay oval.

Overton grew up nearly two hours away in Evans, Ga. and began racing at Screven Motorsports Complex long before he or the track ever thought about running Late Models.

“The second time I ever drove a Late Model was at Screven,” said Overton. “Screven started out as a go-kart track, and I grew up racing go-karts there. I’ve been racing there since I was seven.”

James “Redd” Griffin began carving the complex out of a cotton field outside of Savanna, Ga. in 1996. Since then, Griffin has constructed one of the most diverse racing facilities in the country.

“It shows how much Redd really cares about racing,” explained Overton. “It started out as a go-kart track. Now you’ve seen what it’s grown into. They have one of the best concession stands in the country, and it’s one of the nicest places. It really is pretty cool for everyone to come watch. You pay one ticket price and you can go watch the drag cars, the race cars, the go-karts; it’s a neat deal.”


Screven Motorsports Complex is known as the “Action Track of the South,” boasting a competitive red-clay oval, a quarter-mile Savannah River Dragway, a mud bog, a nearly quarter-mile dirt go-kart track, a paved rental kart track, a concert stage and a concession stand. Having such a large complex on the outskirts of the city has helped to boost the local economy in Sylvania, Ga.

“I employ most of the town,” laughed Griffin. “I hire a lot of police deputies, and all of my cooks, almost all of my people come from Screven County, and let me tell you, those southern ladies know how to cook the best fried chicken you’ll ever put in your mouth. Some people joke around and say, ‘Redd has a race track next to his restaurant.'”

Clanton’s hometown of Fayetteville, Ga. is a little further out from the track than Overton’s, but he always looks forward to racing near home.

“It’s basically a home track for me,” said Clanton “You don’t get to see the World of Outlaws in Georgia too much, so when we are here I just want to do the best I possibly can and put a little extra on those races; and it usually pays off. We’re going in this year no different.”

During the last three Series events at Screven, Clanton has found his way into Victory Lane with the checkered flag in hand.

“The adrenaline helps,” explained Clanton. “We’ve been off for so long and just getting back at it; you get so pumped up. The main thing is building momentum to carry you throughout the year. If you start badly in February it can only end badly in November. Hopefully we can start on top and stay there all year.”

Overton has as good of chance as anyone to start the season off on the top of the Series points race. During the off season he gained a new ride and a new crew, and for the first time in his career he is able to put all of his time and energy into driving.

“Last season I had to drive the truck and work on the car and do pretty much everything,” said Overton. “I had to make all of the decisions. Now I can just show up and enjoy racing instead of just making it like a job all the time.”

Overton is stepping into Randy Weaver’s No. 116 Dream Ride, and they have already showed great success during a few non-Series events. The “Dream Team” won their last race of the 2016 season in November at Boyd’s Speedway in Ringgold, Ga. and their first race of the 2017 season at Golden Isles Speedway on February 10; the following night Overton finished third.

“Randy Weaver has good guys, and the more we get together and gel together the better we will do,” said Overton. “I’m excited to get going. Not that I didn’t have good stuff to begin with, but I have a lot more help now. We have more stuff than what I had [last year]. We have more cars and more motors and stuff like that, and now I have a lot more experience. It’s not just me making all the decisions. Now I have someone who can help me more. I just want to go race, and maybe we can win a few races. I’d be cool with that.”

In many instances, the beginning of the season is a crucial test to see who has what it takes to run with the Series full time. While some drivers have already committed to running full time, others remain on the fence. It all boils down to how they finish during the Georgia/Florida jaunt.

“My plan is to go to Screven and then every time we unload to either win or run in the top-five or top-three and then that will make [the team’s] decision [about the season],” said Overton. “If we leave Volusia and we are the top-two or -three in points it’ll be really hard for them to tell me no, I hope.”

There will be 17 Outlaws taking on the locals at Screven Motorsport Complex on Feb. 17-18 for Winter Freeze VII. The Series will then head to Volusia Speedway Park for DIRTcar Nationals on Feb. 23-25. Tickets for Winter Freeze are available on the day of the event at the gates. Tickets for DIRTcar Nationals are available online at https://dirtcar.ticketforce.com/eventperformances.asp?evt=215 or by phone at 844-DIRT-TIX.