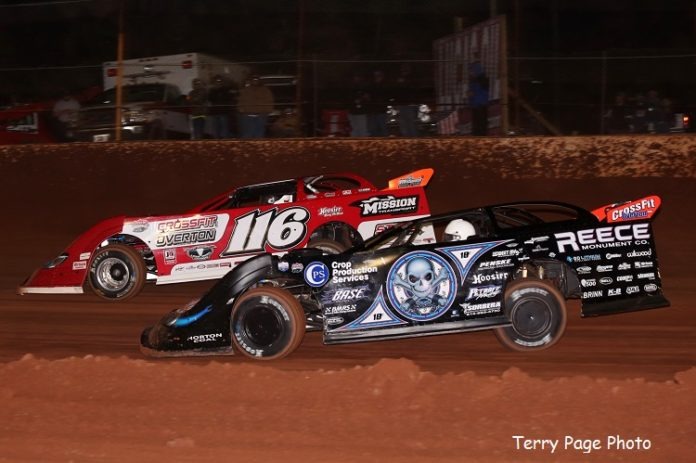 PHENIX CITY, AL – Scott Bloomquist made the win look easy on Saturday night as he led all 60 laps at East Alabama Motor Speedway. The win was also his second Lucas Oil Late Model Dirt Series win of the season. The 53-year-old reigning series champion took the lead at the start of the main event and never looked back as he dominated the competition.

“It’s been so long since we’ve won a race this year, maybe they felt sorry for me,” joked Bloomquist after receiving several thunderous ovations from the huge crowd on hand. I think they did the right thing in watering the track before we went out. Everbody was going to go out there with a hard-right rear tire. I know some changed tires after they watered the track.”

“The car worked really well in the heat race. The car was a little tight at the start of the feature, but it really was working freely for most of the race. Every time you come here, there’s something a little different with the track surface.”

“The track was about as slippery as I have seen it. The Penske Shocks we had on worked perfectly. Thanks to Crop Production Services, Mark Martin, Mike Reece, Sweet Manufacturing, Base, Horton Coal, Sorbera Chiropractic, Petroff Towing, and Crossfit by Overton.”


Bloomquist took the lead at the start of the feature with Pearson running in second. Pearson stayed in second until Lanigan got by him on a lap 11 restart. Lanigan started to track down Bloomquist as the leader was encountering heavy traffic, but Lanigan slipped over the embankment in turn three and dropped to eighth place before he could recover and get back on the racing surface. Owens then moved to the second spot where he stayed the rest of the race.

Owens recorded his second straight podium finish of the weekend with this runner-up position. “He [Bloomquist] was just able to maneuver his car better around lapped traffic than I was. I got that clear track at the end but it was too late he was just too far out there. I want to thank all the fans for coming out tonight, it looked like a big crowd was here. We are looking forward to Duck River tomorrow night because the last time we were there, we ran terribly and I would like to make-up for that.”

Pearson was pleased with his second straight podium finish as well. “To come back tonight and have another strong finish says a lot about this race team. A win and a third against these guys, that’s tough to do. Carlton and Kemp Lamm were here tonight, and I would have liked to have won tonight for them, but we’ll take third and move onto Duck River.”