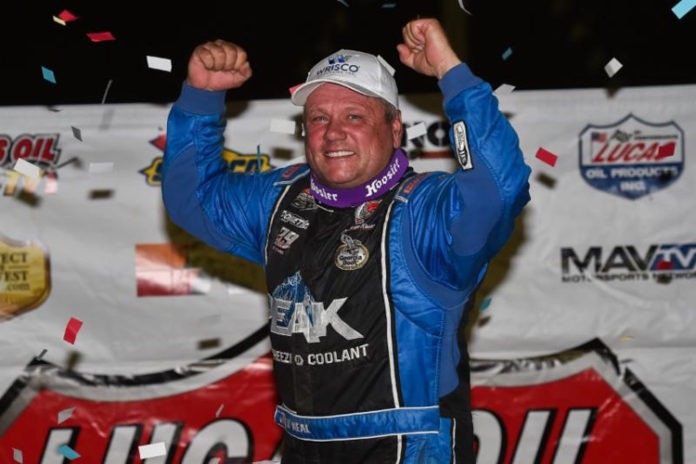 O’Neal made a clean sweep of the night – setting the overall fast time, winning his heat race, and claiming the 50-lap main event for his first series victory since April 2015. The 52-year-old, piloted a two-race old, Club 29 Race Car powered by a Clements Racing Engine for Clint Bowyer Racing.

In Lucas Oil Victory Lane for the forty-second time in his career, O’Neal was estatic with his hard-fought victory. “The crew has worked so hard on this car, people don’t realize how much work goes into these cars. Anthony Burroughs and “Big Snack,” they don’t get any days off it seems. Last night at East Alabama was the first time we ran this car. I never thought he [Bloomquist] would get around me on the outside and then he went to the bottom. When he did that I thought, I could do that as well and it worked out.”

“I have had so much bad luck recently, it feels great to get back to victory lane again. Thanks to Peak Antifreeze and Coolant, Cometic Gasket, Club 29 Race Cars, Crawford Outdoor, Clint Bowyer Autoplex, Traeger Wood Fire Grills, Penske Racing Shocks and Sunoco Race Fuels.”


O’Neal grabbed the lead at the start of the race and led the first four laps until Culp took over the top spot. Looking for his first-career LOLMDS victory, Culp held the top spot until O’Neal regained the lead on the nineteenth circuit. O’Neal then held the point until Bloomquist roared to the outside of him to take the lead on lap 36. The duo battled side-by-side for a several laps before O’Neal cleared Bloomquist for the final time.

Bloomquist who went with the harder LM40 for the main event nearly came home with the win. “It was a pretty good race. We got up there and my right rear sealed up a little bit. Everybody ran a good race tonight up front. There was a lot of give and take and everybody put on a good show. The harder compound hurt us early on. I had to try and stay out of the black. Once I got by him [O’Neal] I thought we could win it.”

English was thrilled with his podium finish. “I was real close there a couple of times to getting the lead. I thought I could get O’Neal there a couple of times and then we had a caution. Then I saw Bloomquist rolling there on top and I thought we were all in trouble at that point because he had that harder tire on. To come in here and do this against these guys it means a lot. I want to thank Seay Motors and M&S Concrete for helping sponsor us.”