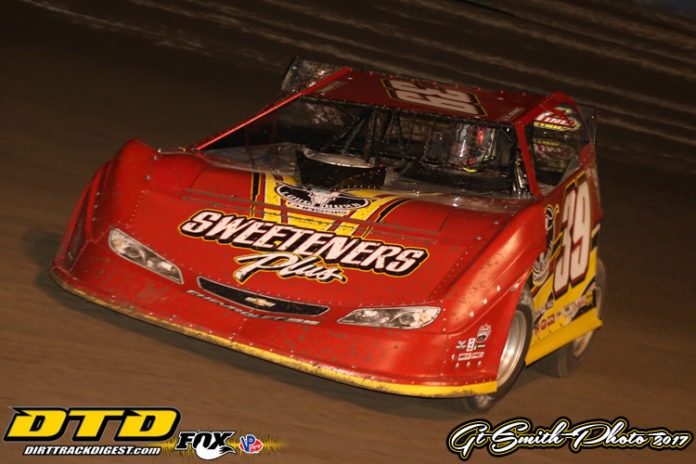 “I want to thank the fans for coming out tonight. I hope we put on a good show for them. It’s not the Topless 100, but it feels just as good to win this race. I am a little speed sensitive. The car felt good in clean air. I just didn’t know where to be. I am glad I had Phillip [Snellen], my crew chief down there helping me out by giving me signals. I got lost out there a little bit just running the top. Then I went back to the middle,” said McCreadie in Lucas Oil Victory Lane.

Arkansas native, Jack Sullivan ran in second for the first eight laps of the race until Darrell Lanigan forged ahead of him. Lanigan then battled with Bloomquist who had quickly made his way to the front of the field after starting on the inside of the fourth row. Lanigan was running third when he slowed on lap 66 to bring out the caution – retiring from the remainder of the event.

A caution with 95 laps in the books set-up a three-lap shootout to the finish – but McCreadie got a good restart and kept Bloomquist at bay. “It was our night,” said McCreadie. “The scoreboard had some lights out on it and I thought there were 30 laps to go or something like that. They told us on the radio that there were three to go, so I was relieved about that.”


Bloomquist was pleased with his night, “Our car was good right from the start. I would have liked to have had some more time to work on the car during the break before the feature, but it turned out o.k. for us. We would get close to him [McCreadie] in traffic and then a caution would come out. His car was good out front with no traffic. We just couldn’t get enough momentum to get by him. I want to thank Reece Monument Company, Mark Martin Automotive, Crop Production Services, and all of our other great sponsors for making this possible.”

Shannon Babb was thrilled with his finish as well, “We are extremely happy with this car. This is only the fourth race we have run this year and these guys have been racing since January and February. I always look forward to coming here to race. The track was good tonight, and we passed a lot of good cars in this race. Our car was good up high, in the middle and down low. I don’t know what happened to Earl [Pearson] at the end, it was a tough break for those guys.