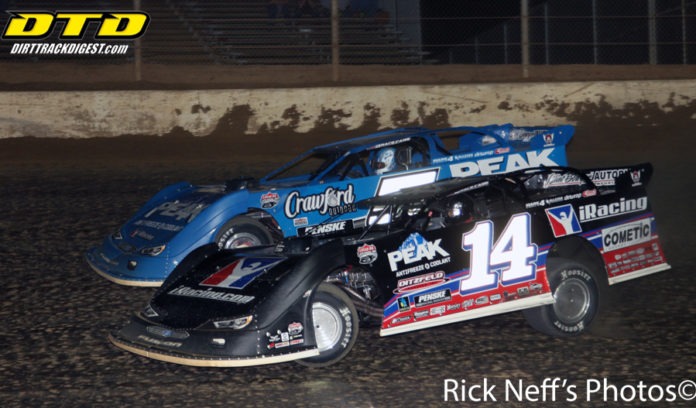 Defending series champion, Scott Bloomquist finished third – while Devin Moran, who ran second for most of the race, finished fourth. Tim McCreadie charged from 11th to complete the top-five.

In Lucas Oil Victory Lane for the first time this season, Lanigan told the crowd: “When you race a teammate, you have to race him differently. Donnie [O’Neal] had a great car. We have had a good car the last few weeks and had some bad luck. It feels good to win here tonight and close to home.”

“We were a little better there in one and two than him [O’Neal]. I kind of used the 71 [Hudson O’Neal] as a little bit of a pick on Donnie. I got through there clean and got the checkered. This is why we do this every week, because we enjoy it. To get a win makes the next night a little bit easier. The track was in good shape tonight, the top finally died out and you could race all over it.”


O’Neal continued his streak of solid performances with his second-place finish. “He [Lanigan] was better in one or two, it’s always better to be running second in lapped traffic because you can see up front better. Congratulations to Darrell on the win. If you are going to lose on the final lap I guess it’s better to lose to your teammate. I never saw him [Lanigan] until I took the white flag. I wish now I had done something different on that last lap. Everybody on this crew is doing a great job and we now have the finishes to show for it.”

Bloomquist crossed the line in third after colliding with Rod Conley at the finish line. “I didn’t even see him [Conley]. I tried to react. I think most of the damage is cosmetic, at least we didn’t destroy a car. It looked like it got the body panels and it didn’t knock the front end out. I didn’t know how the traffic was going to work out on that last lap. I just needed a longer race, but we will take this and head to Sharon.”