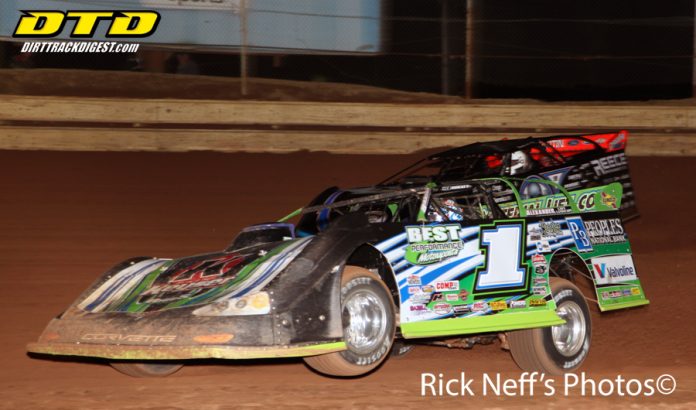 HARTFORD, OH – Josh Richards was victorious in the first ever appearance by the Lucas Oil Late Model Dirt Series on Friday night at Sharon Speedway. Richards took the lead from Scott Bloomquist on lap four and withstood the challenges of both Brandon Sheppard and Gregg Satterlee to take the win in the Steel Valley 50.

“I can’t thank the track staff enough for trying to get the track raceable for the feature. It was tough on the drivers and especially the cars; I know they had put new dirt on the track, but with the rain they had the last couple of days, that didn’t help. We raced as hard as we could to put on a show for these fans. It feels good to come out on top,” said Richards in Lucas Oil Victory Lane for the third time this season.

Bloomquist led the first three laps of the race before yielding the lead to Richards. Sheppard then moved into second and started to challenge Richards for the lead. Satterlee picked up steam and sprinted around Sheppard for second on lap 17. Satterlee tracked down Richards and the two ran side-by-side for a while until Richards pulled away from him.

Sheppard managed to regain the second spot on lap 38 from Satterlee. Sheppard then spent the final 12 laps pursuing Richards. Sheppard was turning faster laps than Richards on several occasions, but Richards held his line and held a steady lead until the finish.

“I was trying to move around a lot in the final laps. As a driver, it’s mentally challenging. We are going to have to go through these cars from front to back for tomorrow at Hagerstown. The crews work very hard during the week to get these cars ready. Thanks to the crowd for coming out tonight, it looked like a big crowd,” said the driver for the Best Performance Motorsports, Dargie Race Engines, Rocket Chassis.


Sheppard tried chasing down the car and team he had driven for the last two years but came up short. “The track finally blew off there a little bit and the racing was good. We dropped back to sixth or seventh early on, but as the race went on, we got stronger and stronger. I would like to thank Mark Richards and Steve Baker from Rocket Chassis, Valvoline, and Seubert Calf Ranches for all of their help.”

The entire staff at Sharon Speedway worked diligently to prepare the race track, however the track surface got away from them tonight. Before the feature, after a unanimous vote by the top-fourteen in championship standings, it was decided to award 100 show-up points to the entire field.