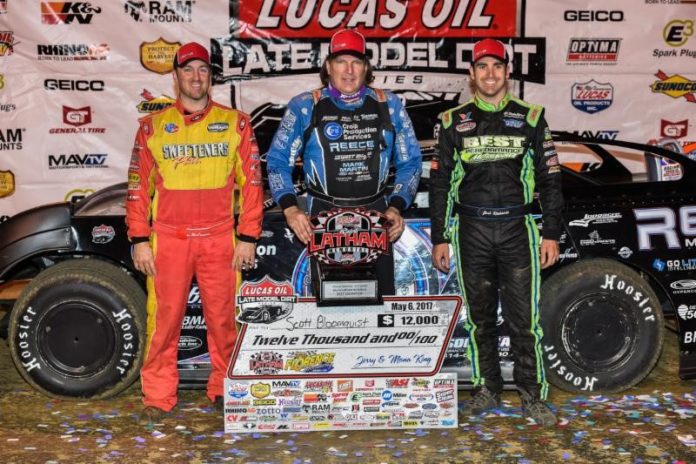 Bloomquist won the event one-year ago on its 30th Anniversary – and maintains his Championship Points lead with the victory. McCreadie got around Richards on the final lap to finish in second. In his first Florence appearance in five years, Richards was third at the finish line. Clint Bowyer Racing teammates, Don O’Neal and Darrell Lanigan, finished fourth and fifth respectively.

“With all of the rain they had this week, we all thought the track would be rough or different than it is most of the time. With the no cutting or siping rule on the right-rear tire, you would hit a slick spot and you didn’t know where the car would go. I got to those last few cars towards the end and I went to the outside of them. I was just hoping I didn’t leave the door open for someone else.”

Bloomquist saw Earl Pearson Jr. mount a challenge early in the race. McCreadie started sixth, and then climbed through the field to pressure Bloomquist for the lead. Several times McCreadie would have an opportunity to get close to Bloomquist, but each time a caution thwarted his run. With less than five laps to go, Richards closed to within a car length as Bloomquist was attempting to lapped traffic in front of him.


Bloomquist veered to the outside and cleared them enough to gain the victory. McCreadie went to the top side of the track with two laps to go in turns one and two and that enabled him to squeeze by Richards on the final lap for second.

“We had a good car all race long. We need to keep tweaking on it during the night to get it better. We are almost there. We are challenging for the wins now and in this type of solid field of cars it’s tough to do night in and night out,” said McCreadie who maintains second place in the championship points.

After tonight’s solid performance, Richards seemed ready to come back to Florence again soon, “I thought I had a shot there when he [Bloomquist] went to the outside of those cars. We didn’t do bad considering we hadn’t raced here in five years. When we come back for the North-South 100 we should be better.”