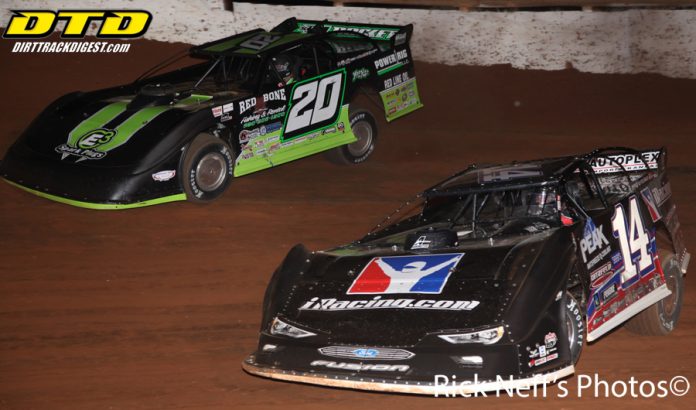 In front of the record-breaking crowd that was on hand, Owens led all 50 circuits for his first LOLMDS win of the season and became the tenth different winner this season on the tour. Don O’Neal finished in second place – followed by Earl Pearson Jr., Shanon Buckingham, and Tim McCreadie, who started 12th.

Driving the Ramirez Motorsports, Rocket Chassis powered by a Durham Racing Engine, Owens went to victory lane for the fourth time in the annual event. “It’s Tazewell,” said Owens in relation to the caution flags that dotted the event and seemed to be the only thing that would slow Owens all night. “The track’s a little different, but considering the weather it was a great race track. I especially want to thank my crew. They have worked their butts off and I feel I have let them down at times this year. I am glad to finally get to victory lane. ”

Owens won the second of the three heat races and earned the outside front row starting spot for the main event. Owens started alongside fast qualifier and heat race one winner, Darrell Lanigan. Owens got the jump on Lanigan heading out of the turn two and was never seriously challenged throughout the rest of the race.

“The crowd they had here tonight is awesome, this place is absolutely packed! These are some of the best fans in the country and it’s good to see all here to support us. We have had a lot of ups and downs. We have a good car here, but I haven’t shown it any justice. Once we get our ducks in a row, maybe we can come home with a few more wins,” said the 43-year-old racer.

After a lap 36 restart, O’Neal moved by Lanigan to take over second place. A few laps later Lanigan slowed with a cut right rear tire. O’Neal continued his strong finishes in LOLMDS competition this season with his runner-up finish in the Peak Antifreeze and Coolant, Crawford Outdoor, Club 29 Race Car.

“It was good solid weekend for us. We had top five’s both nights. The car is good and has been for a while now. Anthony Burroughs and everybody is working hard and now we have the finishes to show for it.”

Pearson had a solid finish with his third place showing in the Dunn-Benson Ford, Lucas Oi lRacing TV, Longhorn entry. He was pleased with his run: “With all the rain they had, it turned out to be a pretty good race. Congrats to Jimmy on the win. We had a good run going with Lanigan and Josh [Richards] until he had a flat. I had to get by Lanigan when I saw his tire was going down. It’s a good run for us here. This place can bite you in a hurry.”