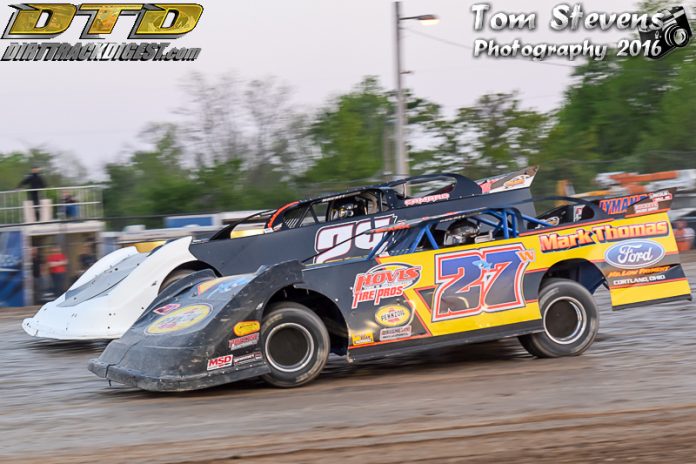 By MIKE LEONE
BUSTI, NY – This Saturday night (May 20), the Sweeney Chevrolet Buick GMC RUSH Dirt Late Model Series powered by Pace Performance kicks off its season at Stateline Speedway with the running of the “Bill Law Memorial”. The $2,000 to-win “Marquee” Event remembers one of the region’s patriarchs in Crate Late Model race.

Law’s involvement in racing began in the late 1970s as he loved having muscle cars and going to the drag strip in his high school days. Even though he never actually raced, he stood behind racing 100%. In the early 1980s, Bill and Leon Szweda put an asphalt car together and raced at New York’s Holland Speedway.

Law’s taste for racing moved to the dirt tracks in the mid 1980s as he helped Tom Taber for several years. He met a lot of great people that he became very good friends with; one was Bob “The Bird” Baldwin. The Law Family traveled with him and his family racing from Pennsylvania to West Virginia to Maryland.

As Bill’s son Jon was getting older, they got involved in Go-Kart racing as the family would travel all over New York and Pennsylvania. Bill was still involved in auto racing as they would race Go-Karts during the day and sell parts and fuel at night at the races. As Jon got older, Bill bought him an IMCA Modified.

“One memory that I have of my dad selling parts and fuel is he always made sure the drivers could race if they broke something and they didn’t have enough cash on hand to pay dad,” explained Bill’s daughter Angela Murray. “He would say just square up with me next week. That was just the type of guy he was.”


A few seasons later, Jon and Bill bought a Limited Late Model. That lasted a couple years until Jon was starting his own family and got away from the racing scene. Bill then turned into a spectator at the races and helped promote nearby Freedom Raceway in Delevan, New York; however, that didn’t last long as his passion for racing took over and he started promoting the Crate Late Model concept. Bill was the first one in the region to have a Crate Late Model, and his driver was Bob Baldwin. Over the years, drivers such as Ward Schell, Rich Gardner, Jon Law, Curt VanPelt, David Scott, and Kyle Scott drove for Bill. “There was a lot of negativity in the early years, but my dad never gave up, and I’m so glad he didn’t cause look where the class is today,” added Murray.

Bill’s family was growing as grandchildren were coming along. One grandchild was Kyle Murray, who had the same passion as his grandfather…the love of racing. At the age of two, Bill would take Kyle to every race with him watching his Crate Late Model race. Kyle and Bill would be racing every weekend until Kyle turned four then Bill bought Kyle his first Go-Kart. During the offseason, the two would travel with the Go-Kart to Ohio, Syracuse, NY, and North Carolina to race indoors making great memories.

Bill took Kyle to races all over to watch as well including West Virginia Motor Speedway and Eldora Speedway. At Eldora’s “World 100”, Bill spent hundreds of dollars on him for the dirt late model simulator. Kyle set the record for the fastest time at Eldora beating both kids and adults alike winning a 5-ft trophy. With the trophy in hand, Kyle and Bill walked in front of the crowd and everyone cheered making both cry.

Bill also worked for Andrews Auto Salvage. “Grandpa would take me with him delivering parts, picking up parts, and going out to eat,” said Kyle Murray. “These memories I have of my grandfather are the most important to me. I know he’s up in heaven cheering me on and looking over me when I’m racing my Crate Late Model.”

In 2011, Bill was diagnosed with small cell lung cancer. He wasn’t going to let that stop him from racing. He still had his Crate Late Model with Kyle Scott driving for him. What great memories those two made as it gave Scott seat time and gave Bill the will to keep fighting. The night that Scott won the feature at Stateline, it lifted his willpower to keep fighting.

“I can never thank Kyle Scott enough for doing what he did for our father,” explained Angela. “No matter how sick or tired Bill was, he was still going to make sure that his car got to the racetrack for Kyle Scott to race. Unfortunately in July 2012, the fight was over for this awful disease.”

“As the 2017 racing season gets underway five years after Bill’s passing, Kyle Murray is following his and his grandfather’s dream of running a RUSH Late Model,” continued Angela Murray. “I always tell my son Kyle to remember that grandpa has your back from up above when you’re sitting in that cockpit. Bill had a great racing career with many ups and downs but he would be proud where the RUSH Crate Late Model class is heading. I could write a book about so many memories that Bill has done in his lifetime with racing. I hope the passion for racing continues with this next generation because that’s what Bill would want.”

Kyle Murray, who is competing for the 2017 RUSH “Futures Cup” Championship, will pace the field Saturday night at Stateline during the four-wide salute in remembrance of the late Bill Law. Race time is 7 p.m.