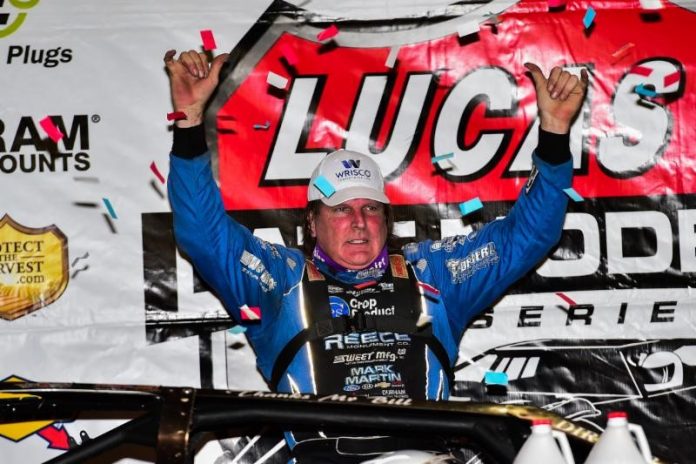 Bloomquist started on the outside front row and led the first 35 laps of the race until Richards worked his way around him in heavy lapped traffic. Richards began pulling away from the pack when he hooked the berm in turn number two causing him to spin sideways in front of the field. The caution came out and Richards had to restart on the tail end of the lead lap.

Bloomquist then held off pole sitter Mike Marlar for his fourth series win of the season. Marlar came home in second, with Dennis Erb Jr. charging from the 10th starting spot to finish third. Don O’Neal and Tim McCreadie completed the top-five.

“I would like to thank my crew; they have worked their butts off the last few weeks building a new car after we wrecked one in Ohio. The top line was fast tonight, but it was also treacherous in spots. A little below that there were some slick spots and I think maybe that’s what caused him [Richards] to spin.”


Marlar was primed to become the 11th different winner this year in series competition, but on the last restart Bloomquist lengthened his lead out which carried him to victory lane.

“It was a good night for us, we set fast time and won our heat race. We had a good car for the feature and were in the hunt all race. Congrats to Scott on the win. It was a tough break for Josh, I hated to see that. He had a good car. I started running the top and it was fast, the track was not too bad at all. They kept working on it throughout the night and it helped it. Hopefully it was a good race for the fans to watch, “said the driver of the Ronnie Delk, Delk Equipment, RS Trading Company, Rocket entry.

Erb came home in third after starting on the outside of the fifth row. “We started deep in the field and to finish where we did we are very happy. The last two races were tough on us, but we had Heather [crew chief Lyne] back with us tonight. We just tried to keep it low enough away from that berm, overall it was good clean race among the frontrunners,” said the driver of the McBride Mack, Vomac Truck Sales, M&S Concrete, M&M Painting, Black Diamond Chassis.