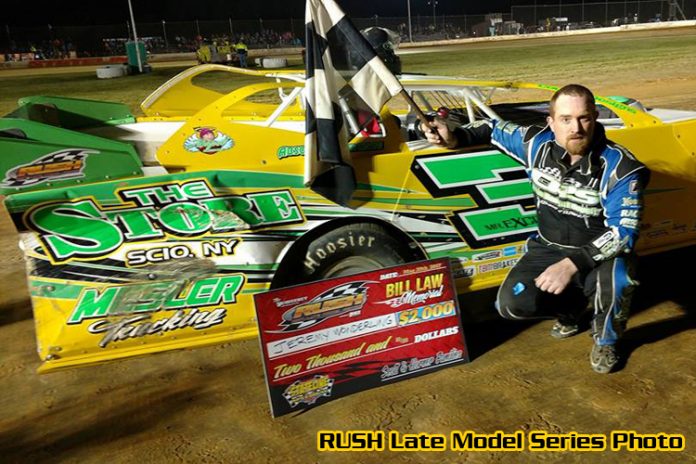 BUSTI, NY – The Sweeney Chevrolet Buick GMC RUSH Dirt Late Model Touring Series powered by Pace Performance opened the 2017 season on Saturday night at Stateline Speedway. The event marked the first ever Crate Late Model Touring Series event at Stateline, which is located just across the Pennsylvania/New York border in Busti, NY. Thirty-one drivers from all over New York, Pennsylvania, Ohio, and West Virginia participated in the “Bill Law Memorial”- an event honoring the late pioneer of Crate Late Model racing in the Northeast. In fact, Law’s last driver was Kyle Scott- the grandson to track owners Jim and Scott.

While the box score may show Jeremy Wonderling leading all 30 laps, his victory in the “Bill Law Memorial” was far from easy. Wonderling passed defending Sweeney Tour Champion, John Waters, on the opening lap and fended off some of the region’s best including a strong challenge by Max Blair over the final 14 laps for the $2,000 victory. Wonderling was also selected as the Maxima “Maximum Performance” award winner.

“That was pretty tough,” expressed the 37-year-old Wellsville, NY racer. “Toward the end of the race my car was quitting coming out of the corner once in a while, and my brake pedal was going further down so I was just trying maintain; then I saw Max and thought ‘this is not good! I was trying not to overdrive the car because Max is one of the best people I’ve ever raced with. To race with him and beat him is one of the best things I can do. When we came down the backstretch and there’s two lapped cars and one is my brother, I was like ‘you better not hit me because I’m going between the two of you’. I figured if I went between the two of them, Max couldn’t make it through there. I think he (brother Mike) knew who it was once I went shooting through there because I didn’t let off until I was way into the corner. So that was pretty good!”

The rim-riding Wonderling used the outside to race past Waters on the opening lap with Mike Pegher, Jr., Max Blair, and Bryce Davis in tow. Pegher and Waters raced hard side-by-side on lap three. Waters ran out of room on the backstretch and smacked the wall causing a lot of front end damage, which ended his night. Waters was selected at the TBM Brakes “Tough Brake of the Night” recipient. Prior to the caution, Davis snuck by Blair for fourth then inherited third with Waters exiting the event.


Back under green, Pegher challenged Wonderling for the lead as the two raced side-by-side with Wonderling holding on, while Lunger got by Blair for fourth. Davis got sideways in turns one and two on lap seven allowing Lunger, Blair, and Wyatt Scott all by for third through fifth. Brian Knowles slowed and was unable to exit the track bringing out the second and final caution of the event with seven laps scored.

When green replaced yellow, Blair grabbed third from Lunger, who would hit the frontstretch wall ending his night but was able to clear the track without causing a caution. The top three of Wonderling, Pegher, and Blair battled for the lead, while Davis watched back in fourth. Blair made the pass of his rival Pegher with an inside move on lap 10 to take second.

Meanwhile up front, Wonderling opened up some ground on lap 12; however, Blair started to reel in the leader on lap 16. Wonderling caught lapped traffic on lap 20 and two laps later Blair was right on his bumper. Wonderling again opened up a little breathing room on lap 23 and then was able to pick off enough lapped cars to have a clear track with five laps to go.

Blair wouldn’t go away as he closed back in on Wonderling on lap 26 and one lap later got alongside of the leader racing off turn four. Traffic again became a factor on lap 29. On the final lap, Wonderling rode the cushion in turn one passing lapped cars as Blair was trying to go where he didn’t go. Racing down the backstretch with Blair right on him, Wonderling made a thrilling move entering turn three splitting the lapped cars of his brother Mike and Jamie Brown to take the win by 0.681 of a second over Blair, who earned $1,000 for runner-up. Wonderling’s second career Sweeney Tour win came in the Terry Prince Contracting/Close Racing Supply/Mesler Trucking-sponsored #3J.

“It means a lot to me to win this race,” added Wonderling, who is now three-for-three in RUSH-sanctioned competition after winning a pair of Sweeny Weekly Series races last weekend at Outlaw and Bradford Speedways. “Bill used to help my uncle Bird race. All of Bill’s family used to race with him. I won their memorial races a couple times at Little Valley, but it was never this hard fought. The Law Family means a lot to me, not just the racing part, but being around my family all my life. I have to thank all of the people that help me and my wife because I wouldn’t be able to do this without them.”

Nick Snayczuk was a late arrival, but led all eight laps of the non-qualifier to pick up the $175 victory. The 27-year-old Delevan, NY driver of the #12 crossed the finish line 2.917 seconds ahead of runner-up Chad Schauers. Snayczuk became the 23rd different winner in the 25 “Wheelman” Bonus Event Challenge Series races run all-time. Matt Sipes was third in his first ever Sweeney Tour start. Bill Law’s grandson, Kyle Murray, was fourth over Khole Wanzer.

Waters set fast time over the 31-car field in FK Rod Ends “Shock the Clock” qualifying with a lap of 17.376 to earn $100. FK Rod End heat winners were Waters, Davis, Lunger, and Pegher, who all earned $25 for the victories. Waters also won the K&N “Cold Air Induction” Dash to earn the feature pole and received a $100 K&N gift card. Brown won the last chance B main.

The Sweeney Tour will be in action on Monday (May 22) at Merrittville Speedway for their Victoria Day celebration in a $2,000 to-win event. Pits open at 4 p.m. with warm-ups at 6:20 followed by FK Rod Ends “Shock the Clock Qualifying”.