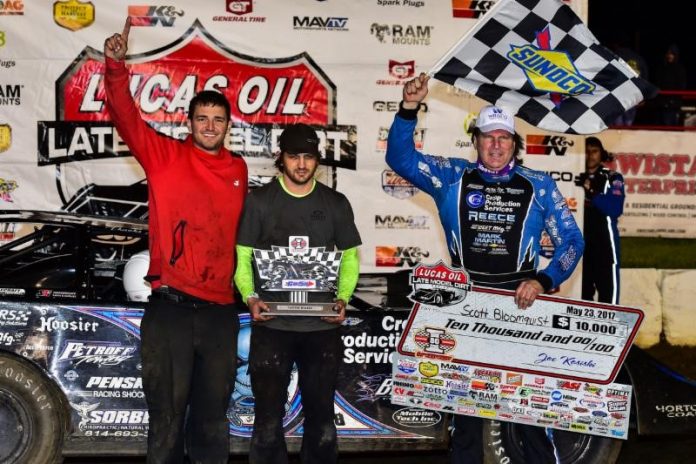 Bloomquist extended his points lead over McCreadie with the win and was pleased with his car for most of the race, “We battled with Lanigan early on; I had to find a line to run at the start. There were several cautions and I was a bit concerned about the tires firing on the restarts. Towards the end of the race, the car was faster and I got a better handle on turn two, it had been causing the car to push a few times.”

“The track was in great shape all night long; they had a lot of rain this week; it was fast. You had to have a good handling car out there tonight with those conditions. They always do a good job here in track prep. We look forward to coming back in July for the Silver Dollar Nationals.”


Bloomquist was challenged briefly by Zeigler in the Ohio Pyle Vacation Rentals, No. 25Z on a few occasions, but each time Zeigler would take a shot at the lead, Bloomquist would pull away. “For our first time here, we are very pleased. We came out to S&S here in Greenwood for work on our trailer and we decided we would stay and race. I am glad we did. It’s a fun race track to run on. We will be back in the future, no doubt about it. This new Rocket XR1 car has been bad fast from the time we started running it,” said the runner-up who posted his second LOLMDS podium finish of the year.

Pearson roared from the outside of row eight to finish third. “It was definitely a good run for the Dunn-Benson Ford, Longhorn Chassis. We were good on the bottom of the track. It was in great shape and very fast tonight. Now, we can head to Wheatland with a strong car and try to win the Show-Me 100.”