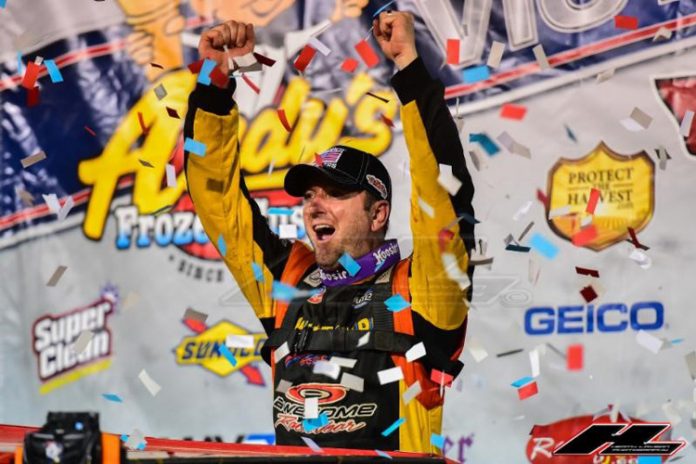 WHEATLAND, MO – Tim McCreadie took the lead on lap 30 from race-leader Jimmy Owens and then went on to win the 40-lap, Tribute to Don and Billie Gibson on Friday night at Lucas Oil Speedway. The event was co-sanctioned by the Lucas Oil Late Model Dirt Series and the Lucas Oil MLRA Series.

Darrell Lanigan led the first 14 laps of the race until Owens charged to the lead. Owens then ran the top line as McCreadie came from the outside of row number five using the bottom groove and closed the gap on the leader. McCreadie then chased down Owens and passed him on lap 30 to take the top spot. McCreadie withstood two cautions late in the race to take his car to victory lane by several car lengths at the end.

“I want to thank the Labonte family for putting faith in me to drive their cars. A Longhorn Chassis won here last night with Earl [Pearson] and we brought home the win tonight. From where we started and as good as the track was, I thought it would be tougher than it was. The car rolled through the corners at the beginning of the race and I was passing cars low and high, it handled like a dream.”

“We showed a lot of speed tonight like last night. But when I got up there with Jimmy [Owens] I knew it would be tough to get by him. He runs so well here, if you can pass Owens here, then you have really done something special. This is my first win here and I will probably never get close to what he has done at this race track. To beat guys like Jimmy and [Don] O’Neal you must be near perfect to get it done. I just hope tomorrow night that we can run all 100 laps consistently, but you never know,” said the 43-year-old driver.


Owens was all smiles afterwards even though he suffered a rare defeat at Lucas Oil Speedway. “We have had so much success here that it’s hard to get down about getting beat tonight. He [McCreadie] was good, no doubt about it. For a guy to come from where he started, that says a lot about this race track tonight. It was a good hard race and I hope the fans enjoyed it. We just have the right set-up for this track and could run anywhere on it tonight.”

“I had some miscommunication with my crew, I was running high and I should have gone down low where McCreadie was running. Anyway, I thought I could get back around him, but he was strong tonight and he deserved the win. We had a good points night again and should get a good starting spot here tomorrow night for the big show.”

O’Neal charged late in the race to capture a third place finish. O’Neal started fifth and battled with Owens for the second spot towards the end of the race. “We had a good car tonight. The crew worked hard after last night, it was a good comeback as well. Tonight’s B-Mains were awesome and I figured the feature would be the same way and it definitely did not disappoint.”

Lucas Oil Championship Point Standings (as of May 23):