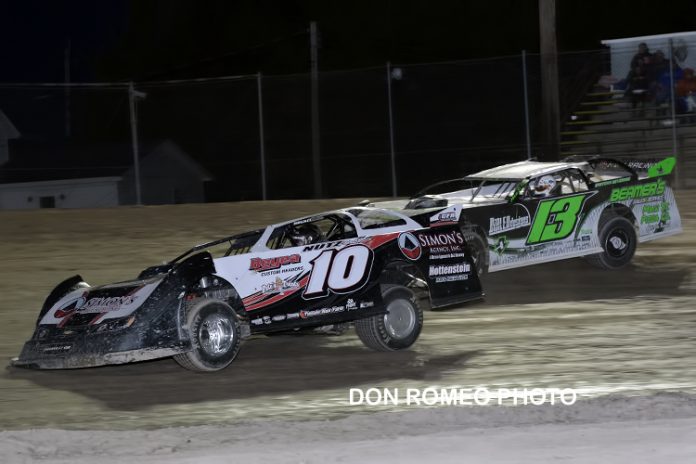 PULASKI, PA – After a rain out on Sunday at Eriez Speedway, the Sweeney Chevrolet Buick GMC RUSH Dirt Late Model Touring Series powered by Pace Performance hopes to resume action this weekend with a doubleheader in New York featuring $2,000 to-win Marquee Events on Friday night at Outlaw Speedway in Dundee and on Saturday night at Genesee Speedway in Batavia. Warm-ups are scheduled for 6 p.m. on Friday night at 5:30 on Saturday. Dry weather is now predicted for both nights.

Friday night is the inaugural “Gary Montgomery Memorial”. Montgomery passed away in November 2016. Montgomery’s passion was his lifelong involvement in stock car racing. From spectator, driver, columnist, local track announcer to NASCAR radio and DIRT television commentator and track promoter, he participated in every aspect of the sport, resulting in lifelong friendships, within the auto racing community. Montgomery most recently promoted the BRP 360 Late Model Series, which has turned into a great stepping stone for many of the top New York RUSH Late Model racers today.

Friday’s event will be the first ever RUSH Late Model Touring Series event held at Outlaw. Outlaw is in its second year of ownership under Tyler Siri and subsequent second year of hosting Sweeney Weekly Series competition. This season, three events have been completed with Brian Knowles, Jeremy Wonderling, and J.J. Mazur victorious.

Action heads east on Saturday night where Genesee Speedway will also host its first ever Sweeney Touring Series event, and the richest Crate Late Model race in the history of the Speedway. MHL Performance is the night’s presenting sponsor. MHL will have the Sunoco 110, RUSH 91 pump gas, and Hoosier Tires available for sale on Saturday. Like Outlaw, current promoter Jim Johnson is in his second year of running the operations at the Batavia, NY track and also the RUSH Late Models are in their second year as a weekly division. This past Saturday, a strong field of 22 cars were on hand with Jimmy Johnson winning his first career RUSH feature.

“I know this is a much-anticipated weekend for our RUSH racers, especially the New York drivers,” stated RUSH Director Vicki Emig. “Tyler Siri and Jimmy Johnson have not only stepped up to host back-to-back $2,000 to-win Tour events at Outlaw and Genesee for the first time, but have also created a mini series of four weekends with Friday-Saturday competition offering a $6,000 point fund with $2,000 to the champion. It’s great to see cooperation and additional promotion amongst our speedways, and we’d be remiss if we didn’t mention that Stateline has dropped their weekly RUSH Late Models in order for their cars to participate at Genesee on Saturday. Genesee did the same for Stateline two weeks ago. It’ll be exciting to head to these tracks for the first time. Hopefully Mother Nature will cooperate.”

Jeremy Wonderling laid down the gauntlet back on May 20 winning a thrilling first ever Sweeney Tour event at Stateline over the 31-car field for the season opener. The exiting 30-lap feature went right down to the wire with Wonderling making a bold move in lapped traffic on the final lap to withstand the challenges by Max Blair for the $2,000 victory. Last August at McKean County Raceway, Wonderling won his first career Sweeney Tour event and is primed to make a run at the championship in 2017 for the first time.

Then on May 22, Charlie Sandercock made history by becoming the first Canadian to win a Sweeney Tour event and did it on Canadian soil at Merrittville Speedway. Sandercock’s victory was also worth $2,000 in the Platinum event.

After losing the 2016 Touring Series Championship to John Waters on the final night at Lernerville, Bryce Davis is off to a strong start with a fourth and a second place finishes last weekend to tie 2013 champion, Mike Pegher, Jr., for the early point lead. Pegher is coming off a pair of third place finishes. Waters meanwhile hasn’t gotten off to the start he had hoped for crashing out of the feature at Stateline and then fading from the pole position to a sixth place finish at Merrittville.

FK Rod Ends “Shock the Clock Qualifying and Beat the Heat” will be utilized each night meaning the fastest qualifier will receive $100 and all heat race winners will earn $25. The K&N “Cold Air Induction” Dash will be run paying a $100 K&N certificate to win, $50 K&N certificate for second with $25 cash for third and fourth place. The K&N Dash will also set the beginning of the 30-lap feature lineup for the top two finishers in the heat races if there are less than five heats or for the heat winners if there are five or more heats.

Precise Racing Products will award a $100 gift card for the “Pedal Down” Hard Charger that passes the most cars in the feature each night. The TBM Brakes “Tough Brake of the Night” will award three bottles of Xtreme6 Racing Brake Fluid valued at approximately $45 along with a certificate for a discount off any TBM Brakes purchase each night.

RUSH Officials will choose the “Maxima Performance” Award for a driver that exhibits a performance worthy of such each night. The winner will receive a free case of either Maxima Semi-Syn High Performance Racing Oil or Maxima Performance Racing Oil of your choice. In addition, the winner will receive one can of SC-1 clear coat, one 16-oz bottle of Maxima Cool-Aide concentrate, one 32-oz quart of Maxima PSF power steering fluid, and a Maxima t-shirt. The value of this prize package is $170!

ARbodies will award a nose kit to the first non-qualifier part of the “Nosed Out” contingency program on Saturday night. Also, CrateInsider.com will award a $25 gift certificate to the driver that finishes last on the lead lap at the finish each night.

Genesee Speedway is located off Route 5 at the Genesee County Fairgrounds at 5056 E Main Street Rd, Batavia, NY 14020. For more information, check out their website at genesee-speedway.com and like them on Facebook by searching Genesee Speedway.