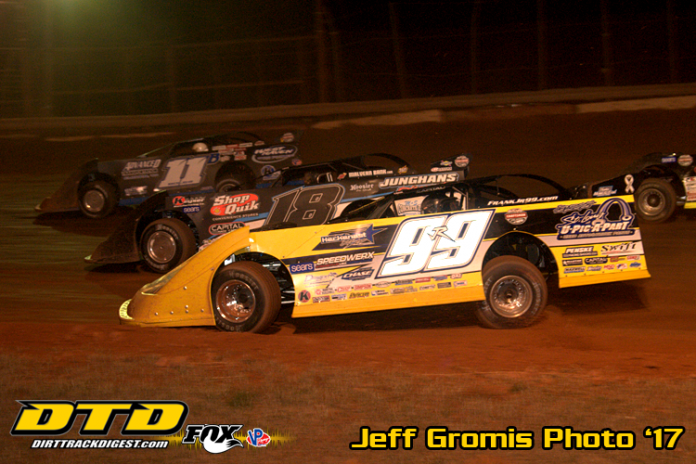 By KAYLA MAY (WORLD OF OUTLAWS PR)
CONCORD, NC – The World of Outlaws Craftsman Late Model Series is approaching one of its toughest stretches of the season as they head to the Midwest for five races at five different tracks in a nine-day span, four of them within four days‘ time. The stretch includes Deer Creek Speedway on July 8, Ogilvie Raceway on July 12, Hibbing Raceway on July 13, River Cities Speedway on July 14 and North Central Speedway on July 15.
During last year’s Midwest swing, Tyler Erb had his best and most consistent run of his rookie campaign- racking up three six-place finishes and one seventh of his 10-total top-10s for the season (Mason City Motor Speedway, Deer Creek Speedway, Ogilvie Raceway, and Quincy Raceways). Additionally, by the looks of how the night started at River Cities last year, Erb could have potentially tacked on another top-10 as he set Fast Time before the event was called due to rain.
“We race all over the United States, but Deer Creek has to be one of my favorite tracks we go to,” said Erb. “I’m really looking forward to going back. Both Deer Creek and Ogilvie are tracks that I feel really comfortable on. We had a good run there last year, and I feel even more confident headed into that swing this year. I also know that guys like Devin [Moran] and [Chris] Madden don’t have much experience on those tracks.”
The Texas native considers the Midwest tracks a part of his stomping grounds as they are closer to his side of the country than most other Series races. By the time the Series leaves the track at North Central Speedway on July 15, Erb and his crew guy Christopher Jayko will have been on the road for 52 consecutive days.
“It’s nothin’ but a G thing to be out here on the road for so many days,” said Erb. “It helps that I have friends in the industry. I’ve been able to stay with Devin [Moran] for a few weeks now and will stay here for a few more weeks throughout the season. He has everything I have at my shop. I can build sheet metal, I can wash here, and I can even get my laundry done. It’s basically like being at home, but I don’t have to drive the extra 16 hours back to my house.”
The World of Outlaw Craftsman Late Model Series has a history at many of the Midwest tracks. The Series has appeared on the track at Deer Creek Speedway 14 times with the inaugural visit being in 2005, and at River Cities Speedway nine times with the first year being in 2006. Additionally, for the last three years Hibbing Raceway has appeared on the Outlaw schedule. The 2016 event was cancelled due to rain, making Shane Clanton the last winner from a Series event at the track with his win in 2015.
There are also a few Midwest tracks in the mix with not as much history. Last year was the first time that the Outlaws visited Ogilvie Raceway, and it was ultimately Josh Richards who took the checkers over Clanton and Steve Casebolt. The Series also looks forward to returning to North Central Speedway for the first time since 2012.