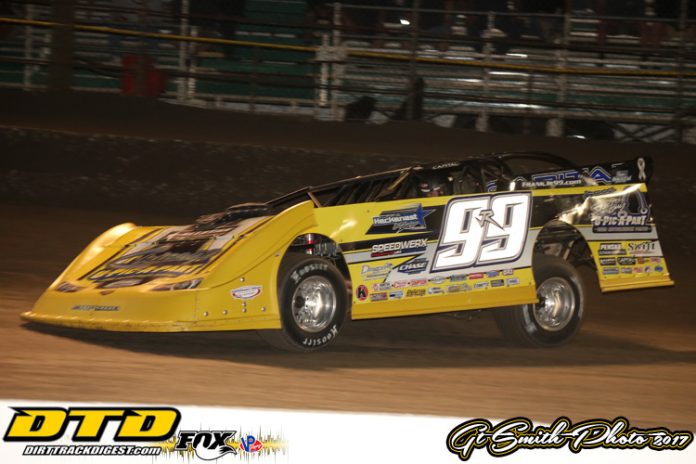 CONCORD, NC – Sherri Heckenast had a long-term goal of bringing short track racing back to the Chicago area, and this season she can mark that goal complete as the biggest dirt track racing series in the world will take her stage when the World of Outlaws Craftsman® Late Model Series and World of Outlaws Craftsman Sprint Car Series stop at the Dirt Oval at Route 66 Raceway for the FVP Outlaw Clay Classic on June 27-28.

When Heckenest set the goal for the Dirt Oval at Route 66 Raceway, the track was primarily a demolition derby facility for Team Demo Association, an organization she bought eight years ago.

“My long-term goal was to make Route 66 a circle track, but at the time I didn’t know if that would be tomorrow, next month or ten years,” said Heckenast. “They began building a million-sq. ft. building next to the track, and one of the guys came over and said that they had heard we needed some dirt. So I layered on about 1100 loads of dirt in my backyard that was pure organic black clay. The timing just all fell into my lap, and it could not have happened any better.”

Over this past winter the transformation from demo days to dirt track racing began. Heckenast and her team, including her brother and full-time Outlaw driver Frank Heckenast Jr., reconfigured the half-mile track to a 3/8-mile by removing and replacing concrete walls and the 20-ft. fencing around the facility.

“Frankie has been able to give me perspective from all over the county on track prep,” said Heckenast. “Even myself, I’ve been a racer and a promoter for a long time, but unless you go through the change that I went through at Dirt Oval you don’t look at those things. I’m a promoter at heart, and I’m all about putting on a good show, and even for myself track prep has been a huge learning curve for me. I never realized how much work goes in to that piece of the puzzle.”

Frank Jr. has been a full-time World of Outlaw Craftsman Late Model Series driver for the past four years, but this season he has been focusing on more than just what happens on the track. He has taken an interest in the behind-the-scenes preparation of a dirt track event.

“Racing all over the country, you see how it is everywhere,” said Frank. “I used to never, never, never, pay attention to track prep. I wouldn’t look at their equipment or nothing, but now that my family has a track I pay attention to everyone’s equipment, especially what they use to water the track. I’ve been taking pictures and sending them to [Sherri] to show her what all I see other people using and what works.”

Although Frank has had a hand in the transformation at the Dirt Oval at Route 66, when he pulls onto the track on June 28 with the World of Outlaws Craftsman Late Model Series it will be his first time turning laps at the track as well.

“Everyone thinks that he has been practicing here; of course they do. Frankie is going to be under the same standard as everyone else,” said Sherri. “He will be no different when he pulls into Gate 14 to pay for his Pit Pass than anyone else. In all of the tracks I’ve owned he’s never been given anything special. I want people to respect him for where he finishes, whether that is first in a race or last. He deserves where he finishes, and I want people to respect him for that and not respect him for something that I may have done on my end.”

Not only is there added pressure on Frank to run well since his sister owns the track, but there is always added pressure for any driver running close to home. The Dirt Oval at Route 66 is located near the Heckenast’s family businesses, which will bring family, friends and employees to the track to see Frank race.

“I don’t get to race around home a lot or in front of my family, friends, and our employees, so it would be awesome if I could have a good run there,” said Frank. “Everyone knows we race; they just never get to see us. Also, all these guys I race with up and down the road are my friends, and I want the track surface to be good for everyone. So on Wednesday I will be so focused on the track that I hope I will still run good in my car that night.”

Although it’s not often Frank’s family can make it to a World of Outlaws race, when Sherri watches her little brother take the track she still feels the adrenaline that she used to feel when she sat behind the wheel.

“Everyone always asks me if I miss racing, but the truth is that I get the same adrenaline from watching my brother, and even maybe moreso,” said Sherri. “There are two things now that give me the same adrenaline that I had when I was racing, and one of them is watching my little brother race. The other is when we are getting ready to throw the green flag on an event that you worked 12 months for and you can see that it’s sold out or that it is packed and that people are happy and making memories that they will remember for their lifetime. That kind of stuff brings the same adrenaline as when I used to race, and it adds a level of gratification.”