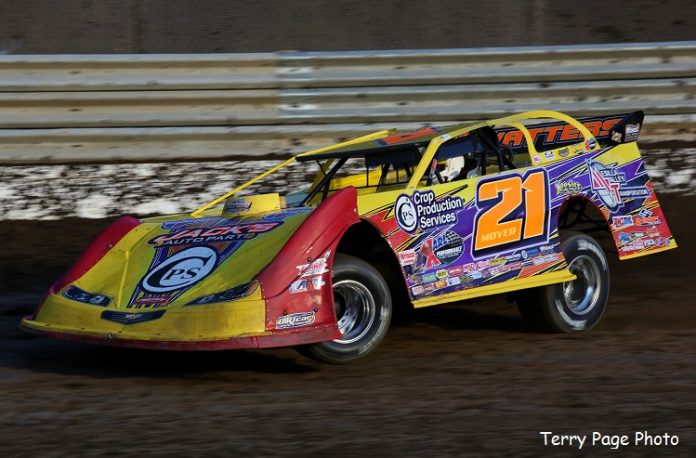 MAPLE PARK, ILL — Racing at an unfamiliar track proved to be no problem for Billy Moyer on Friday night.

The Hall of Fame driver from Batesville, Ark., quickly made himself comfortable at Sycamore Speedway, grabbing the lead from Brian Shirley of Chatham, Ill., on lap eight and controlling the remainder of the 40-lap distance to capture the historic third-mile oval’s first-ever UMP DIRTcar Summernationals event.

Moyer, 59, pocketed $7,500 for his second victory in the first three races of the 2017 Hell Tour. His record 95th career win on the series combined with his triumph in Wednesday night’s opener at Brownstown (Ind.) Speedway to sandwich a subpar performance on Thursday evening at Kankakee (Ill.) County Speedway — where he plummeted from the third starting spot to a 15th-place finish — that fueled his Sycamore effort.

“For as terrible as we was last night,” Moyer said, “I had to redeem ourselves.”

The six-time Summernationals champion did just that with a virtually flawless outing in his self-designed Victory Race Car. He cooly handled two restarts during the race’s second half to cross the finish line 1.376 seconds in front of El Paso, Ill.’s Ryan Unzicker, who slipped past Shannon Babb of Moweaqua, Ill., for the runner-up spot heading to the white flag.

Babb, who reached second place from the eighth starting spot by lap 21, settled for a third-place finish. Billy Drake of Bloomington, Ill., who on June 13, 2013, won the last Super Late Model special event at Sycamore before the Hell Tour’s inaugural visit, moved forward from the ninth starting spot to finish fourth and 15th-starter Bobby Pierce of Oakwood, Ill., placed fifth one night after winning at Kankakee.