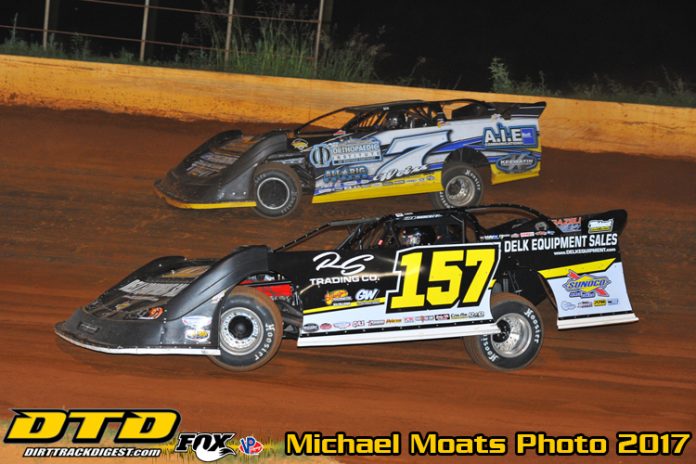 COLUMBUS, MS – Mike Marlar made a clean sweep of the Lucas Oil Late Model Dirt Series racing action on Saturday night at Magnolia Motor Speedway. The Tennessee native set Miller Welders overall fast time, won his heat race, and took the top spot in the Country Pleasin’ “Clash at the Mag.” With the win, he became the thirteenth different winner this season on the LOLMDS tour.

Marlar made it to Lucas Oil Victory Lane for the seventh time in his career. His last series victory came in 2016 at the Lucas Oil Late Model Knoxville Nationals last September. Marlar was elated with his win before the large crowd on hand for the event. “It takes a lot of hard work to do this. I work a full-time job; and these guys that work on the car, they are like family to me. We always enjoy coming down here to race. Johnny Stokes does a great job with the track. It is always raceable. We love racing at such racy tracks like this one,” said the 39-year-old, second generation driver.

“I would like to thank Ronnie Delk for giving me this chance to drive his equipment. This Rocket Chassis has been good all year. We set fast time and won our heat to start on the pole. Overton was good early on. This is such a momentum track, right before that last caution, I thought I had messed up and let him [Overton] back by me, but we held on.”

A caution with three laps to go bunched the field up for a single file restart. Overton took one last shot at Marlar, but brushed the wall, which ended his hopes for the win. Erb got by Overton to take the second spot, but Marlar had pulled away for the win.

“After that last restart, I tried to make the car as wide as I could. You must keep the speed up here. They went out and worked the track on the bottom and on the top before the feature. I think it paid off because the fans got to see a heck of race,” said the driver of the Delk Equipment Sales, RS Trading Company, Sunoco Race Fuels, Modern Images, GW Performance, Cornett Racing Engines, Rocket Chassis.

Erb started on the inside of row number five and was pleased with his podium finish. “The car was good all night. From where we started, we are pleased. The car was better on the bottom, there were some anxious moments at the end though. Everybody wanted that second spot. I saw him [Overton] get out of the groove. I just stayed on the bottom and brought it home in second.

Overton; who won the first LOLMDS event of the season at Golden Isles Speedway; brought the Chip Stone, Randy Weaver-owned, Longhorn Chassis home in third. “I have to thank all the guys with the team. I made it exciting at the end, I was going for it, no doubt about that! I just got into the wall and that ended our chances. Mikey [Marlar] gave me plenty of room. He drove a good race, so congratulations to him and his team.”