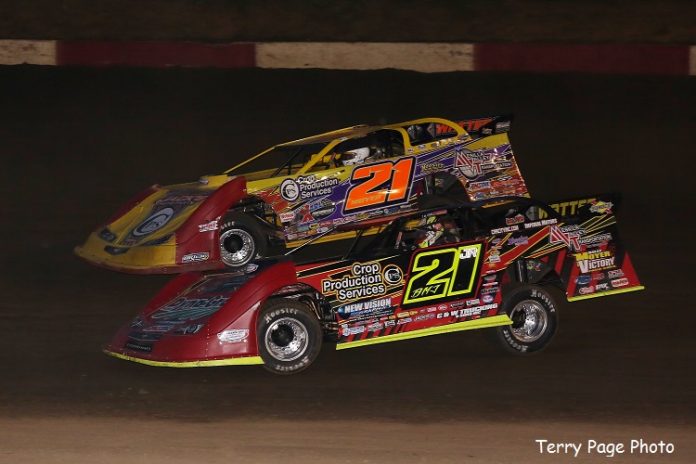 Billy Moyer Jr. was leading the $10,000-to-win event when heavy rain poured down, prompting officials to send the field to the pit area. With no hope of waiting out the storm, the evening’s action was stopped just short of the halfway point that would have made the A-main official.

No makeup date for the completion of the feature was immediately announced.

The thunderstorms that threatened the track as evening fell held off long enough for the feature to get the green flag at 8:23 p.m. following a four-wide parade lap.

Moyer Jr.’s father, Billy Moyer, came off the outside pole to outgun his son for the lead at the start. The elder Moyer set the pace until Junior surged ahead to assume command on lap 15.

Bobby Pierce also passed the elder Moyer for second place on lap 15 and was looking to mount a challenge on Junior when a caution flag flew on lap 17 for Roger Rebholz’s stopped car in turn two. Pierce stuck with Moyer Jr. on the restart before the brewing battle was stopped by the rain on lap 20.

The elder Moyer was running third when the race was red-flagged, Brian Shirley was fourth and Billy Drake was fifth.