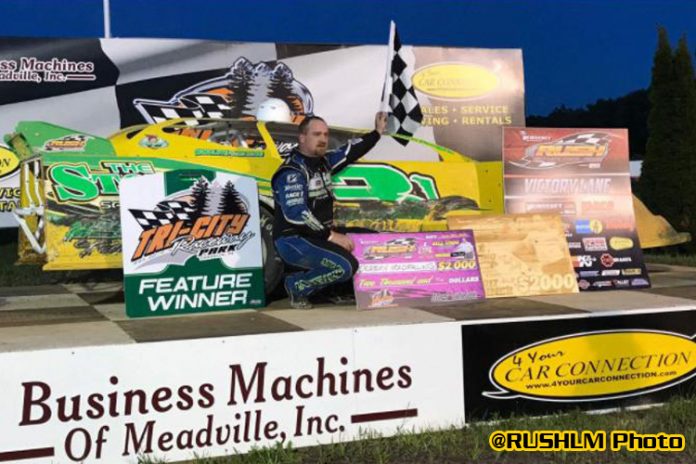 FRANKLIN, PA – The Sweeney Chevrolet Buick GMC RUSH Racing Series powered by Pace Performance made its first visit of the season to Tri-City Raceway Park on Sunday for the rescheduled “Bill Emig Memorial” for both the RUSH Late Model Touring Series and the RUSH Sportsman Modified Bicknell Racing Products Touring Series. Capturing wins were Jeremy Wonderling in the Late Models and Kyle Martell in the Sportsman Modifieds. The event was originally scheduled for Father’s Day, but was postponed a week due to thunderstorms. Sunday’s weather was fall-like with cool conditions and scattered showers, but the show was completed without any delay.

Jeremy Wonderling opened the Sweeney Late Model Touring Series with a thrilling victory at Stateline Speedway on May 20 by out-dueling standout Max Blair. On Sunday, Wonderling was the benefactor of a flat tire by Mike Pegher, Jr., who dominated the first half of the event, and went on for his second $2,000 Tour win of the season. The 30-lap victory was Wonderling’s first ever at Tri-City and first ever “Bill Emig Memorial” win.

“It was good to win, but Mike Pegher has us covered on that one,” stated the 37-year-old Wellsville, NY driver. “I see he had a flat tire and still finished second so I’m pretty sure he was the fastest one here, but I’ll take them however I can get them. I knew if I moved John (Waters) up a little into the loose stuff he’d spin his tires, but I can’t be too mean to him because I race him all the time and we’re good friends. I had a softer tire than everyone so I was just trying to stay on the bottom. When Mike got by me I was just trying to maintain then I saw him pull off and thought ‘I need to make the best of this while he’s gone’. I didn’t know Bill (Emig), but obviously he was a pretty good part of the sport with Vicki. Winning a prestigious event like this is pretty special.”

Pegher was able to shoot past Wonderling racing off turn two on the opening lap for the lead. By lap three, Pegher began to pull away from the field, but his lead was erased when Christian Schneider spun to bring out the caution. When racing resumed on lap four, Jason Knowles moved into the top five past Bruce Hordusky, Jr. and brought J.J. Mazur with him in sixth. Hordusky would soon exit the event with a flat tire and was awarded the TBM Brakes “Tough Brake of the Night” recipient. Mazur then passed Knowles for the fifth spot on lap five.

Pegher soon pulled away again from the pack and opened up a straightaway lead by lap 10. Pegher caught lapped traffic on lap 13 and made a great move splitting W.L. Stile and Schneider by going three-wide down the frontstretch on lap 14. Knowles slowed to bring out the caution running sixth with 14 laps scored. Under caution, Pegher exited the event with a flat tire handing the lead to Wonderling with Bryce Davis, John Waters, and Mazur moving into the top four spots.

Back under green, Wonderling took off in the lead, while Davis got by Waters for second. It didn’t take Pegher long to fly back through the field as he already was up to fourth on lap 16 when he got by Mazur. Pegher got the caution he needed when Tony White spun with 23 laps recorded.

The final seven laps went caution-free. Pegher got under Davis to take third on the restart and caught Waters on lap 26. The two were side-by-side in turn four on lap 27, and made contact with Pegher getting by for second. By now Wonderling had too much of a lead and would hold off Pegher to win by 1.864 seconds in his Terry Prince Contracting/Close Racing Supply/Mesler Trucking-sponsored #3J.

Pegher earned $1,000 for his runner-up finish in Brian Swank’s #RJ1, and was awarded the Maxima Racing Oil “Maximum Performance award for his efforts all night long. “Those guys gave me a really good car tonight,” expressed Pegher. “It’s disappointing that we gave it away with a flat tire, but those guys work just as hard as anyone else. It was still good to come up and finish second in the end. Vicki (Emig) has done so much work over the years. I have to give her a round of applause and everything she does for this sport. It means a lot to us racers. We do appreciate it. Obviously I didn’t get a chance to meet her dad, but I’m sure he was a pretty good dude.”

Waters beat out Davis for third. Mazur, who is in his first year on the Tour, recorded his best finish in fifth. Jamie Wrightsman’s sixth place was his best effort since a fifth at Expo Speedway on July 15, 2015. Michael Duritsky, Jr., who has five Sweeney Weekly Series wins this season at Roaring Knob Motorsports Complex, made his first Sweeney Tour start of the season and finished seventh after starting 12th. He received a $100 Precise Racing Products gift card for being the “Pedal Down” Hard Charger.

Brian Knowles was eighth. Kyle Lukon and Schneider also made their first Tour starts of the season and were ninth and 10th. W.L. Stile made his season debut and finished 12th as the final car on the lead lap and received a $25 CrateInsider.com gift certificate.

Davis set fast time for the first time this season in FK Rod Ends “Shock the Clock” Qualifying to earn $100. Pegher and Waters picked up an extra $25 for winning FK Rod Ends heat race. Wonderling won the K&N “Cold Air Induction” Dash to earn the feature pole and received $100 cash in memory of John Buzzard, who was a former driver for Bill Emig. Pegher received a $100 K&N certificate for second, while Davis earned a $50 K&N certificate for third, and Waters $25 cash for fourth.

Kyle Martell led wire-to-wire to win the 20-lap, $600 to-win RUSH Sportsman Modified feature for his first career Tri-City win. For Martell, it was his second Bicknell Racing Products Touring Series win in as many races repeating his $800 winning performance in the season opening event on June 9 at Thunder Mountain Speedway. After leading that event early on, Martell slipped to third then inherited the win after Brian Schaffer and Rocky Kugel tangled battling for the win just before the rains came and ended the race three laps early.

“This one feels a lot better,” stated the 17-year-old Rootstown, Ohio winner after asked about the victory compared to how he won the Thunder Mountain race. “It’s a bigger race, and it’s always good to win a memorial race. It’s probably one of the most important races of the year so this feels amazing. My car was good tonight and was setup perfect to get through the bumps. I knew if I messed up once I was going to lose it so I focused on hitting my marks and line every lap. I had to be constant, consistent, and perfect.”

The race got off to a rough start when seven cars tangled on the opening lap in turn one. After that, the race went caution-free. Martell took off in the lead over Chelsie Kriegisch and Rocky Kugel, who passed Josh Deems for third. Kugel caught Kriegisch on lap three and looked like he was about to overtake her, but Kriegisch held on. Kriegisch then closed in on Martell on lap six. After fading slightly, Kugel was able to make up ground and made it a three-car race for the lead on lap 12.

Kriegisch and Kugel stayed right on Martell, but Martell didn’t make any mistakes as he raced on to the victory by 0.940 of a second in his father Tim Martell-owned, Sarchione Chevrolet/Sarchione Ford/Northern Buckeye Lawn & Landscape-sponsored #8. For her all around performance all night including her feature runner-up, Kriegisch was selected as the Maxima Racing Oil “Maximum Performance” award winner.

Kugel was named the Sherwood Wheels “Man of Steel” due to getting his car back together after a scary flip at Thunder Mountain and rebounded to finish third on Sunday. Eighth starting Nick Ritchey got by Brian Schaffer on lap 13 to finish fourth. Chas Wolbert came from ninth to complete the top five. Rounding out the top 10 were Deems, Anthony Gillespie, Schaffer, Brandon Ritchey, and Jessica Kriegisch.

Gillespie was the Precise Racing Products “Pedal Down” Hard Charger after starting 12th and earned a $100 gift card. Josh Seippel was the final car on the lead lap and received a $25 CrateInsider.com gift certificate. Steve Slater, who got caught up in the opening lap accident, was selected at the TBM Brakes “Tough Brake of the Night”.