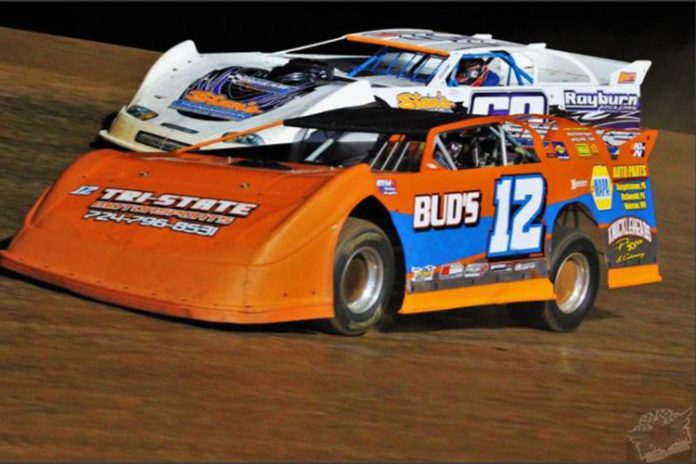 Friday’s event at Lernerville has become an annual pairing for both the Late Models and Sportsman Modifieds with the BOSS Sprint Car Series. The weekly RUSH Pro Stocks will also be in action. Friday will be a $2,000 to-win “Marquee” Sweeney Tour event for the Late Models and a $600 to-win Bicknell Tour event for the Sportsman Modifieds at the Sarver, Pa. oval.

Five of the seven scheduled 2017 Sweeney Tour events for the Late Models have been completed with four different winners. Bryce Davis, who won at Outlaw Speedway, currently leads the points by 10 over Jeremy Wonderling, the Series’ only repeat winner. Wonderling won the $2,000 opener at Stateline Speedway and last Sunday’s $2,000 “Bill Emig Memorial” at Tri-City Raceway Park. Defending Series Champion, John Waters, has a win at Genesee Speedway and is third in points. Charlie Sandercock became the first Canadian to win a Sweeney Tour event when he won in his home country at Merrittville Speedway on May 22.

Meanwhile, the Sportsman Modifieds have completed two Bicknell Touring Series events this season with Kyle Martell ironically winning both over 26-car fields. The Ravenna, Ohio 17-year-old won his first ever race at Thunder Mountain Speedway on June 9 then did the same last Sunday at Tri-City. Martell, the 2016 “Futures Cup” Champion, has a 15-point lead on Anthony Gillespie heading into this weekend’s events.

The Sportsman Modifieds will then be right back in action on Saturday at Sharon Speedway in Hartford, Ohio with the June 24 rescheduled $600 to-win Bicknell Touring Series event and the fourth annual “Manufacturers Night” as over $19,000 in products will be distributed to competing racers. There will be at least 37 product packages each valued at a minimum of $350 up to the grand prize of $1,420!

MSD Performance, the “Official Ignition” of RUSH, will present all five of the Series’ Manufacturers Nights as well as providing product for giveaways. MSD was purchased by Holley Performance in 2016, which expanded their support and contribution substantially to RUSH throughout all of the divisions under the RUSH banner.

On Sunday, action heads back north as the Old Bradford Speedway hosts its first ever Sweeney Late Model Touring Series event! The “Firecracker 50” will be one the season’s richest RUSH Late Model events paying $3,000 to-win, $300 to-start. Due the small size of the 1/4-mile track, the starting field will be 18 cars with up to two provisionals. An increased paying non-qualifiers event will be run pending enough cars.

Bradford, which is located just east of Bradford, Pa. in Rew, is in its third year of running the RUSH Late Models on a weekly basis under Norm Asel. Bradford will be new territory for many of the racers. Unfortunately weather has been the real story this season as only two events have been completed with Jeremy Wonderling winning on opening night and Andy Michael victorious in the second event. Bradford also runs the RUSH Pro Mods, which will also be in action on Sunday.

“This is a big weekend for us,” acknowledged Series Director Vicki Emig. “The Lernerville races always produce some of the season’s best racing and drivers certainly appreciate the opportunity to race there. We thank the Tomson Family for continuing their support of RUSH. The weather hasn’t been kind to Sharon this year, but when the Sportsman Mods have raced, the car counts have been very good. We expect a great turnout on Saturday for our Sportsman Mod Tour and MFG Night. We have to thank Norm Asel for stepping up and paying this impressive purse for our Late Models on Sunday. He wanted to do a big event over the Independence Day holiday thus the $3,000 to-win Firecracker 50.”

The FK Rod Ends “Shock the Clock” Qualifying and “Beat the Heat” program will be in effect at Lernerville and Bradford for the Late Models meaning the fastest qualifier will receive $100 and all heat race winners will receive $25.

For both nights of competition for both classes, the K&N “Cold Air Induction” Dash will pay a $100 K&N certificate to win, $50 K&N certificate for second, and $25 cash for third and fourth place. The Dash will also set the beginning of the Late Model feature lineup for the top two finishers in the heat races if there are less than five heats or for the heat winners if there are five or more heats, while the Sportsman Modified dash will set the line-up for the first four positions outside of the redraw cars.

Precise Racing Products will award a $100 gift card for the “Pedal Down” Hard Charger that passes the most cars in each feature. The TBM Brakes “Tough Brake of the Night” will award three bottles of Xtreme6 Racing Brake Fluid valued at approximately $45 along with a certificate for a discount off any TBM Brakes purchase for each division.

RUSH Officials will choose the “Maxima Performance” Award for a driver that exhibits a performance worthy of such. The winner will receive a $50 certificate, one can of SC-1 clear coat, one 16-oz bottle of Maxima Cool-Aide concentrate, one 32-oz quart of Maxima PSF power steering fluid, and a Maxima t-shirt.

ARbodies will award a nose kit to the first Late Model non-qualifier part of the “Nosed Out” contingency program at each event. Also, CrateInsider.com will award a $25 gift certificate to the driver that finishes last on the lead lap at the finish of each feature.

You do not have to a member of RUSH to compete. The AMB/MyLaps transponders are required at Lernerville and Sharon. RACEceivers are always mandatory. The entry fee is $100 for Late Models and $25 for Sportsman Modifieds each night. Pit passes are $30 all three nights. Pits open at 5 p.m. on Friday, 4 on Saturday, and 3 on Sunday.

Lernerville is a 4/10-mile high-banked clay oval located 11 miles southeast of Butler, Pa. on Route 356 at 313 North Pike Road, Sarver, PA 16055. Lernerville is just 30 miles northeast of the Pittsburgh metropolitan area. For more information, check out their website at www.lernerville.com or call 724-353-1511 (office) or 724-353-1350 (track). Like their Facebook page at www.facebook.com/Lernerville and follow them on Twitter @Lernerville

Sharon Speedway is owned by the Blaney, Weller, and Kirila Families and is a 3/8-mile dirt track located on Custer-Orangeville Road in Hartford, Ohio near the intersection of Routes 7 & 305. For more information, check out the website at www.sharonspeedway.com or call 330-772-5481. Become a fan of Sharon Speedway on Facebook at www.facebook.com/sharonspeedway and follow them on Twitter @sharonspdwy.

The Old Bradford Speedway is located at 330 Summit Road, Bradford, PA 16701. For more information, call general manager Jeff Gardner at 814-598-9599 and check out their Facebook page at www.facebook.com/theoldbradfordspeedway.