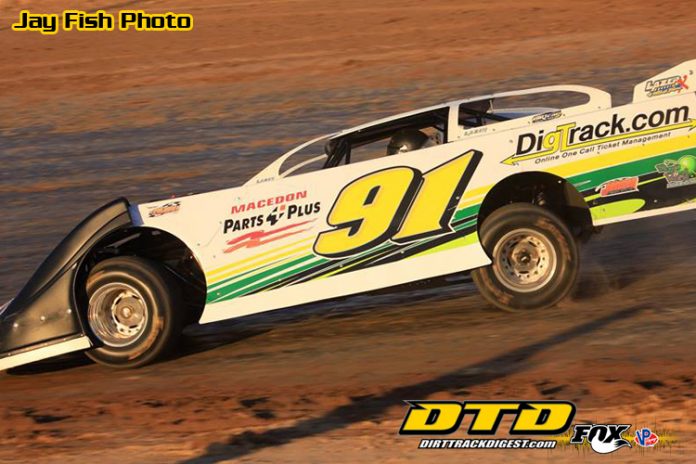 PULASKI, PA – Various storm systems and scheduled track nights off made for a short field of tracks completing events in the Sweeney Chevrolet Buick GMC RUSH Racing Series powered by Pace Performance family of tracks and divisions. Two drivers were able to win their first RUSH Late Model races, while Dennis Lunger, Jr. continues to dominate the RUSH Pro Mods, and new winners were featured at Jennerstown Speedway on the asphalt.

All three Friday night tracks, Potomac, Outlaw and Lernerville Speedways did not have events scheduled for their respective RUSH divisions or were simply closed. Brewerton Speedway had a special Sweeney Late Model Weekly Series event planned for Friday, but was rained out. Saturday night also saw Pittsburgh’s Pennsylvania Motor Speedway close their gates for a night to step aside for Lernerville Speedway’s annual three-day “Firecracker 100” weekend. Adding to that, Fulton Speedway scheduled the night off for high school graduation, while Sharon Speedway succumbed to heavy rains that left the grounds saturated.

However, it was a different story in Winchester, Virginia where Allen Brannon made the winning move on leader Mike Franklin on the eighth lap to take the top spot at Winchester Speedway. Brannon went on for his second straight win and fifth in nine starts at Winchester this season. Kris Eaton, Logan Roberson, Franklin and Scott Sweeney made up the rest of the top five. A season high 21-car field was on hand. The RUSH Late Models will be part of the Independence Day Classic Series on Saturday July 1st. The three-day series also includes stops at Georgetown Speedway on Sunday night for the richest ever Crate Late Model race in Delaware paying $1,776 to-win and wraps up on Monday at Potomac Speedway when the RUSH Lates will run two 20-lap feature events.

Saturday night at Delaware International Speedway, the first order of business was to run a 15-lap make up feature from a race that fell victim to a curfew two weeks prior. Matt Glanden held off all comers with just two yellow flag periods in the feature to take his first win of the season. He held off the likes of five-time champion Joe Warren, who ultimately came in third behind Sparky White. Fourth and fifth went to Matt Hill and Tyler Reed. In the regularly scheduled 15-lap feature, it was Glanden again setting the pace with Warren just behind. But in a caution-free event the field started to lap slower traffic and Warren was able to get around Glanden for the win, his fourth of the year. Glanden settled for runner-up, capping off a great night. White, Hill and Reed made the top five in feature number two. Delaware gets back to racing this Saturday, July 1st.

Last Tuesday at McKean County Raceway, John Waters started on the outside front row and took the victory in the RUSH Late Model event serving as one of the support events to the visiting World of Outlaws Late Models. Jeremy Wonderling moved up from his sixth starting spot to take the runner up spot ahead of Jason Knowles, who gave Sweeney Touring Series regulars a sweep of the podium. Brad Mesler was fourth as Eric Wilson improved his starting position by 10 spots as he finished fifth. On a side note, multi-time RUSH Champion, Max Blair, bested the WoO Late Model portion to take the very popular hometown $10,000 win! McKean will have another midweek special on Thursday where the RUSH Late Models will be the undercard to the Patriot Sprint Tour.

Genesee Speedway refused to give into the rain and held on for a full night, which culminated with the featured race of the night, the RUSH Late Models. The track, which remained very fast even for the last feature, was much to the liking of J.J. Mazur as he took the lead just before halfway from Zack Carley. After a few cautions, the race went non-stop for the final 14 circuits and brought lapped traffic into the mix. Mazur made some impressive moves made his way through the traffic to take his second win of the season over Brad Mesler, Carley, Bill Holmes and Jimmy Johnson. A solid of field of 20 cars were on hand. Genesee has averaged over 20 cars per night this year in their second full season of running the RUSH Late Models weekly. No racing this Saturday as Genesee prepares for a mid-week show for the ULMS Super Late Models. The RUSH Late Models return on July 8.

Saturday night in RUSH Pro Mod action at Stateline Speedway’s “Open Wheel Mania” event, Dennis Lunger kept his perfect streak alive as he raced his seventh win in as many starts this season at the Busti, NY oval. Lunger clearly had the field covered as he sped away at the start of the race and then again on the event’s sole restart. Lunger’s win came at the expense of Ryan Scott, Scott Gurdak, Justin Carlson, and Matt Harvey. Lunger is now five wins away from a perfect score in the Sweeney Weekly Series standings.

Roaring Knob Motorsports Complex continues to be able to complete events. Saturday night was their leading 11th RUSH Late Model show and it was a new face in victory lane as Bobby Cossell IV earned his first career RUSH-sanctioned win. Cossell’s win came in just his sixth start of the season at the Markleysburg, Pa. oval and came over Michael Duritsky, Jr., Mark Wells, Bob Nelson, and Joe Moyer. The Cossells will sponsor a special $1,000 to-win program this Saturday night at Roaring Knob.

On to Sunday when Rob Pietz took the early lead in the RUSH Late Model feature at Humberstone Speedway in Port Colborne, Ontario. But that lead vanished on the 14th lap when New York’s Chad Homan went low under Pietz and took the lead. Homan stretched his lead as the laps wore down taking his second win in three starts over Pietz, Sam Pennacchio, Paul Grigsby and Jeff Dayman. A full card of racing is on tap for Canada Day Weekend at Humberstone this Sunday featuring a $1,000 to-win RUSH Late Model race.

At Eriez Speedway Max Blair, fresh off his win with the World of Outlaws Late Models earlier in the week, took the win from his eighth starting spot on Sunday night besting the likes of Kyle Zimmerman, Darrell Bossard, Mike Knight and Scott Gurdak. The win was Blair’s first of the season in the RUSH Late Models at Eriez and fourth overall for the defending Sweeney Weekly Series Champion.

Finally, Sunday night saw the running of the “Bill Emig Memorial” at Tri-City Motorsports Park near Franklin, Pennsylvania where both the Sweeney RUSH Late Model Touring Series and Bicknell RUSH Sportsman Modified Touring Series were in the spotlight. Originally scheduled for Father’s Day, the “Bill Emig Memorial” pays tribute to one of the most successful car owners in western Pennsylvania and eastern Ohio, and the father of RUSH Racing Series Co-Founder Vicki Emig. Jeremy Wonderling inherited the lead when Mike Pegher, Jr. had a flat tire on lap 15 and then held off Pegher’s challenges from the tail for his second RUSH Touring Series win of the season and third of his career. John Waters, Bryce Davis and J.J. Mazur were third through fifth.

In the RUSH Sportsman Modified portion of the event, it was Kyle Martell leading for green-to-checkered for his second straight Bicknell Tour win. Chelsie Kriegisch, Rocky Kugel, Nick Ritchey and Chas Wolbert were second through fifth. A strong field of 26 cars were on hand for the second straight Tour race.

Both the RUSH Late Models and Sportsman Modifieds move to Lernerville Speedway this Friday in a Touring Series doubleheader to join the RUSH Pro Stocks as companion races to the BOSS Wingless Sprint Cars. The RUSH Sportsman Modifieds will then move to Sharon Speedway on Saturday night for their rescheduled Bicknell Touring Series event plus “Manufacturers Night” presented by MSD Performance where over $19,000 in products will be given away. On Sunday, the Sweeney Late Model Tour will make its first ever visit to Old Bradford Speedway for a $3,000 to-win event.