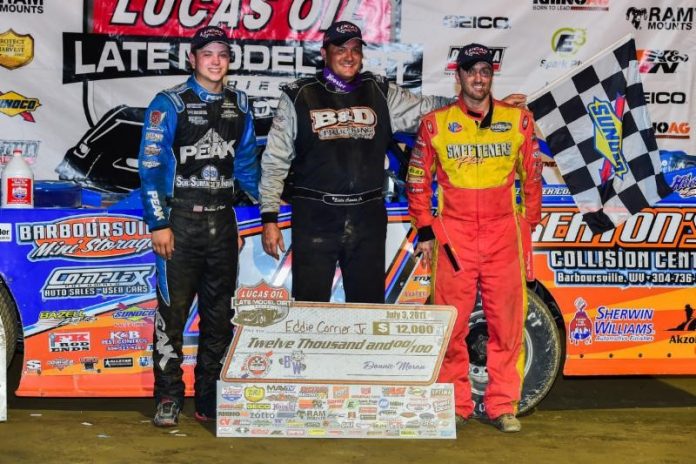 ZANESVILLE, OH – Eddie Carrier Jr. took over the lead on lap 25 when Devin Moran suffered heartbreaking mechanical issues. He then went on to dominate the remainder of the race to win the Lucas Oil Late Model Dirt Series-sanctioned event on Monday Night at the Muskingum County Speedway. It was Carrier’s ninth career LOLMDS victory.

Carrier becomes the 14th different winner this season on the LOLMDS tour, in his Keaton’s Collision Center, Durham-powered Longhorn Chassis entry. The 46-year-old driver withstood several charges from Scott Bloomquist who left the race under caution on lap 48. Afterwards, Carrier went unchallenged the rest of the way.

Hudson O’Neal collected his second-straight podium finish with a career best runner-up finish in the Todd Burns-owned, Club 29 entry as he out-dueled Tim McCreadie in the Sweeteners Plus, Longhorn. Don O’Neal and Josh Richards completed the top five.

“Thank you to Longhorn Chassis, as well as Rick and Jake Keaton for giving me such a good car. I am a big guy and to find a car that fits is tough sometimes, but we have had something special going on the last two weeks. We won at Florence last week and to come here and beat these guys, that’s huge.”

“Scott’s [Bloomquist] going to race you clean; he and I have run together so much over the years that we know what to expect out of each other. I was fighting and trying to hold him off.”

Hudson O’Neal closed the gap on fellow LOLMDS Rookie of the Year candidate Gregg Satterlee, who finished in 24th. “What an amazing race track and race, Donnie [Moran] knows what he’s doing. Tim [McCreadie] and I had good race, once I cleared him I thought I had a shot at Eddie. I have to go down there [to the pits] and thank my crew. They have given me a great race car the last two nights.”

McCreadie with his third-place finish closed the gap on the top-two in points. “Man, when I passed little O’Neal I thought I had a good shot at the win, but he came back and got back around me. The bottom just never took off all night. He [O’Neal] and Devin [Moran] are respectful on and off the race track. It’s hard to find that nowadays there are some that forget where there right rear quarter-panel is.”