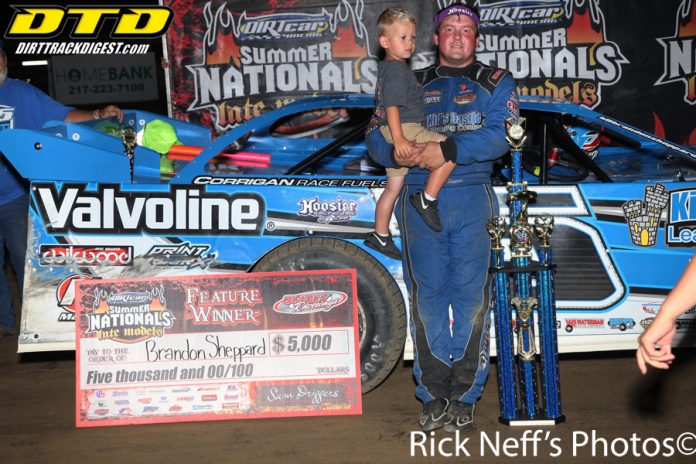 By KAYLA MAY (WORLD OF OUTLAWS PR)
CONCORD, NC – The World of Outlaws Craftsman® Late Model Series will tip over the halfway mark of the 2017 season following the upcoming Midwest swing through Minnesota and North Dakota. By the halfway mark, the Series has visited 16 states of the 21 listed on the schedule, including one Canadian providence.
No matter state boundaries, Brandon Sheppard is arguably the best driver in the country right now. Paired with the Rocket 1 Racing team, he has at least one win among six different touring series:  World of Outlaws(8), Lucas Oil Late Model Series(2), DIRTcar Racing(1), DIRTcar Summer Nationals(1), NeSmith Dirt Late Model Series(1), and Southern All Star Racing Series(1) – for a total of 14 wins in the 2017 season. On top of that, he has additional wins in his family-owned B5 machine. His dominant driving style and consistent runs on the track place him as the number one driver to beat at the top of the 2017 Series points standings with eight wins, 16 top-five and 18 top-10 finishes in 21 Series races.
“I just want to stay consistent and keep winning races. That’s ultimately the goal,” said Sheppard. “We’ve been trying a few different things here and there, and we’ve been getting better at some tracks. I’m really hoping to go to Cedar Lake and be competitive for the win there.”
Sheppard leads the points race by 184 over Tyler Erb, who sits in second. Sheppard versus Erb is a battle we’ve seen take place multiple times throughout the season, including Erb’s three second-place finishes to the Rocket1.
“[Brandon] has definitely been the class of the field, but it’s been an honor running with all of these guys. Hopefully we can win one of these things after all of these seconds,” said Erb.
The young gun is in his sophomore season with the Series and is fighting for that first career win every time he takes the track. It’s only a matter of time until we see the no. 91 of “Terbo” Tyler Erb in Victory Lane.
Sitting third in the points chase is another young driver, Devin Moran. The rookie claimed his first-ever Series win in his home state of Ohio at Atomic Speedway by sweeping the night – setting fast time, winning his heat and taking the checkers.
Moran’s goal at the start of the season was to finish among the top five in the championship points standings. What might have seemed like a tall order for a 22-year-old who had never run a touring series full-time, now seems completely manageable as he sits with one win, six top-fives and 13 top-10 finishes.
As predicted  at the beginning of the season, the points race is close. While Sheppard has a bit of a cushion on his lead, the season is far from over. The following positions in the points race are anyone’s for the taking any night of the week. Only 22 points stand between Erb in second and Moran in third. And only 10 points stand between the rookie and fourth, which is tied between Shane Clanton and Chris Madden, and 12 points between the pair and Rick Eckert in fifth.
This season has seen 11 different drivers grace Victory Lane: Brandon Sheppard(8), Shane Clanton(3), Brandon Overton(2), Rick Eckert(1), Chris Madden(1), Don O’Neal(1), Timothy Culp(1), Brian Shirley(1), Mike Marlar(1), Max Blair(1) and Devin Moran(1).
A couple of other drivers have been on the brink of an Outlaw win. Eric Wells has had four podium finishes this season- second at DIRTcar Nationals at Volusia Speedway Park and the Outlaws vs. Summer Nationals showdown at Federated Auto Parts Raceway at I-55, and third-place finishes at Cherokee Speedway and Senoia Raceway.
As for Frank, he claimed a third-place finish in his home state of Pennsylvania at Lernerville Speedway for the Firecracker 100 – his best finish since April of 2016. Frank has been a mainstay on the tour since the Series was rekindled in 2004 and currently sits ninth on the all-time wins list for the series. With talk of this being Chubzillas last season running as a full-time Outlaw, we have our fingers crossed that he will park the 1* in Victory Lane one last time.
The 2017 season still has some tricks in the bag, with several notable Late Model events coming up. To cap off the month of July, the 28th annual Prairie Dirt Classic at Fairbury American Legion Speedway is sure to draw a large crowd of both drivers and fans for the two-day showdown (July 28-29). The Series will then head from Illinois to Wisconsin for five shows in five days: OshKosh SpeedZone Raceway (Aug. 1), Shawano Speedway (Aug. 2), and three days of the USA Nationals at Cedar Lake Speedway a 100-lap $50,000-to-win event (Aug. 3-5).
Heading into the last quarter of the season, the Series will visit Michigan for the first time in 2017 for the Keyser Manufacturing Great Lakes Shootout at Merritt Speedway (Aug. 26-27). The Series will also return to two tracks: Lernerville Speedway for the Working Man (Sept. 2) and the Dirt Oval at Route 66 Raceway for the Chi-Town Showdown (Oct. 13-14). The Outlaws will close the book on the 2017 season at the Dirt Track at Charlotte Motor Speedway  for the World Finals (Nov 2-4) and the crowning of the season champion.