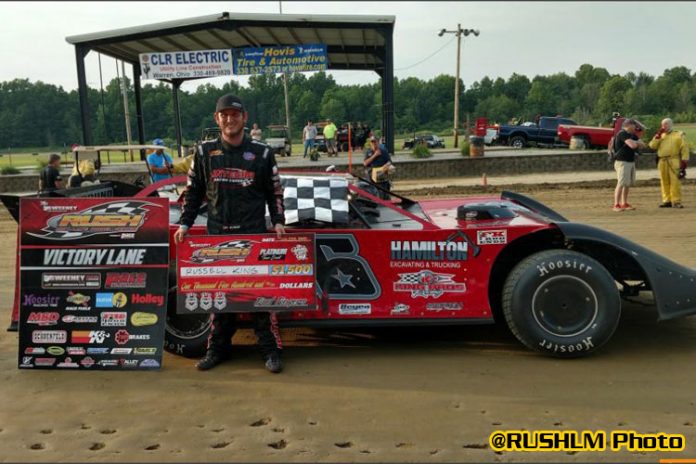 CORTLAND, OH – The Sweeney Chevrolet Buick GMC RUSH Racing Series powered by Pace Performance had another doubleheader event on Wednesday evening as the Sweeney Late Model Touring Series and the Bicknell Racing Products Sportsman Modified Touring Series made its annual stop at the big 5/8-mile at Expo Speedway part of the 171st annual Trumbull County Fair. Track conditions were optimal and most likely the best ever in the 10-year history of RUSH racing at the fairgrounds. The entire night, which received rave reviews, went caution-free with only one total DNF in the features.

Russell King always makes the most of his RUSH Late Model starts. Making just his third start of the season, King led every lap of his heat race, redrew the pole for the feature, and went out and led all 20 laps of the non-stop feature for his second win of the season. Following up on his $2,000 win at Lernerville Speedway on June 30, King added $1,500 for his third career RUSH win at Expo, and was also named the Maxima Racing Oil “Maximum Performance” Award winner.

“This track was really, really good tonight,” stated the 28-year-old nearby Bristolville, Ohio racer. “Bud (Rogers) and the track crew did a great job on it. The dust was minimal and the track was smooth. It’s great to come out here and win in front of all of our family, friends, and sponsors. I just live around the corner. Not a lot of people get to see me race because we don’t run Late Models much around here. I appreciate everyone coming out. I love this track. It’s fast and high speed, but there’s finesse to it. The frontstretch is kind of like a NASCAR track with a tri-oval. When my parents promoted the track back in 1995 I sat in the stands and loved the speeds. I wish we could race here more. I can’t thank the Fairgrounds, Bud, and RUSH enough for putting this on.”

King and Series point leader, Bryce Davis, raced side-by-side down the frontstretch and into turn one on the opening lap with King having the preferred line as he took charge. King quickly pulled away on lap two, while the battle was on for second between Davis and sixth starting Mike Pegher, Jr.. The two raced side-by-side from laps five through seventh with Davis barely holding on, while two-time Series winner, Jeremy Wonderling, closed in. Pegher finally made the pass for runner-up on lap 10, but now faced a half-straightaway deficit.

With the laps ticking off caution-free, King caught lapped traffic on lap 13 and split W.L. Stile and Tony White not allowing Pegher to cut into his lead. King caught traffic again on lap 18 and this time Pegher was able to chew into the lead and closed on the final lap, but would run out of laps. King took his fourth career Tour win in the KMB Inc.-owned, Russ King Racing/King Bros./King Sanitary/Hamilton Excavating & Trucking-sponsored #56.

In just five Sweeney Tour starts in 2017, Pegher has now recorded three straight runner-up finishes to go along with two third place efforts! “The track is big and it’s hard to catch someone when they’re that far ahead,” explained the 31-year-old Cranberry Township, Pa. racer. “I think we had a pretty good car. It would have been nice to see a caution. Hats off to the track crew- it was phenomenal tonight. Hopefully it will be like this next year.”

Wonderling slipped by Davis on lap 19 for third as he recorded his fourth podium finish as he chases after the Sweeney Tour points for the first time in his career. Davis slipped to fourth, but continues to lead the points in search of his first Sweeney Tour championship. Waters was fifth. Dave Airgood, Jr., who won the second heat race, was sixth in his first RUSH start of 2017. Eric Wilson and Brian Swank were a season best seventh and eighth respectively. Alan Dellinger raced from 15th to finish ninth and earned the $100 Precise Racing Products “Pedal Down” Hard Charger gift card. Jason Knowles completed the top 10.

Chad Sines was the final car on the lead lap in 13th and received a $25 gift certificate from CrateInsider.com. Tony White finished last and was given the TBM Brakes “Tough Brake of the Night. Wilson won his first K&N “Cold Air Induction” Dash of 2017 to earn a $100 K&N certificate over Swank, who received a $50 K&N certificate. Brian Knowles earned an extra $25 cash for finishing third.

One month ago at Thunder Mountain Speedway, Rocky Kugel found himself upside down in the pit area after contact with another competitor while leading that sent Kugel to the hospital. Since then, Kugel has made a pair of starts with a runner-up and a third. On Wednesday, Kugel returned to victory lane for the first time since the accident by leading all 15 non-stop laps of the $600 to-win feature for his first Bicknell Touring Series victory of 2017. Kugel was also selected as the Maxima Racing Oil “Maximum Performance” Award winner.

“It helps starting up front in clean air and you can pick your line, but we’ve had a rough go of it,” said the emotional, soon-to-be 41-year-old East Liverpool, Ohio driver. “We flipped this car. My dad and brother helped me put this car back together on wheels in four days. I can’t thank them and Chuck List enough. It’s fun to come back and win. I think we finally got it right. We had carburetor problems after the flip. I want to thank Vicki (Emig), Mike (Leone), and the fans for coming out. And congratulations to Vicki on her hall of fame induction.”

After drawing the pole position, Kugel battled hard racing side-by-side with Kole Holden nearly the entire first lap with Kugel prevailing. Jessica Kriegisch was third after one lap, while Brian Schaffer and Kyle Martell got past Shayne Izzo for fourth and fifth respectively. By lap three, the top two of Kugel and Holden distanced themselves from the field. Martell, who won the first two Bicknell Tour events, passed Schaffer for fourth on lap 12.

Back up front, Kugel caught lapped traffic on lap 13 and one lap later, Holden closed in. Holden was within striking distance on the final lap, but couldn’t get close enough to make a bid for the lead as Kugel’s third career Bicknell Touring Series put him on top of the all-time Series win list. For the year, the victory was Kugel’s fifth in RUSH Sportsman Modified competition in his Classic Landscaping-sponsored #83x. It was Kugel’s first career Expo win as he became the third different RUSH Sportsman Modified winner in as many years.

Holden improved on his season’s best Bicknell Tour finish of third at Lernerville Speedway on June 30 with a runner-up. “I think we had a pretty good car tonight,” said the 18-year-old Tiona, Pa. racer. “Starting up front does help. We were able to figure out the car and keep it up in the top two. I’m pleased with the run. I think I had a chance at Rocky. We were pretty equal for much of the race so I thought it was a good race.”

Jessica Kriegisch had a tremendous night winning her heat race and running third the entire race one year after his sister Chelsie picked up her career first win. Not only was it a career best Bicknell Tour finish for the youngest Kriegisch, it was her first career top five finish in her third year of RUSH competition! Martell’s fourth place finish allowed him to maintain the Bicknell Tour point lead for the 2016 “Futures Cup” Champion. Schaffer was fifth.

Tiffany Williams raced from 10th to sixth for her best effort of 2017 and earned the $100 Precise Racing Products “Pedal Down” Hard Charger gift card. Chas Wolbert was seventh as Chelsie Kriegisch, Brandon Ritchey, and Izzo completed the top 10. Izzo was named the Sherwood Racing Wheels “Man of Steel” for coming back from a fire and what he thought was a blown engine at Lernerville to compete on Wednesday; and in fact, Izzo wasn’t even sure if he was going to be to compete shortly before warm-ups due to mechanical issues.

David Kalb, Jr. was the final car on the lead lap and received a $25 CrateInsider.com gift certificate, while Don Blaney was the only driver to not finish either feature and was named the TBM Brakes “Tough Brake of the Night. Besides Jessica Kriegisch, Wolbert and Jeremy Weaver also were heat winners over the 21-car field, which was the highest ever at the track for the division. Williams won her first K&N “Cold Air Induction” Dash for a $100 K&N certificate over Jim Bryce, who received a $50 K&N certificate. Ritchey and Billy Myers were third and fourth respectively and added an extra $25.

The Sweeney RUSH Late Model Tour will be off until Sunday, July 30 at Eriez Speedway in Erie, Pa. for a $2,000 to-win “Marquee” Event. The Bicknell RUSH Sportsman Modified Tour will have the 2016 “Apple Festival Nationals” $800 to-win make-up feature at Sharon Speedway on Saturday, August 5. Stay tuned for a make-up date on the “Manufacturers Night” presented by MSD Performance.