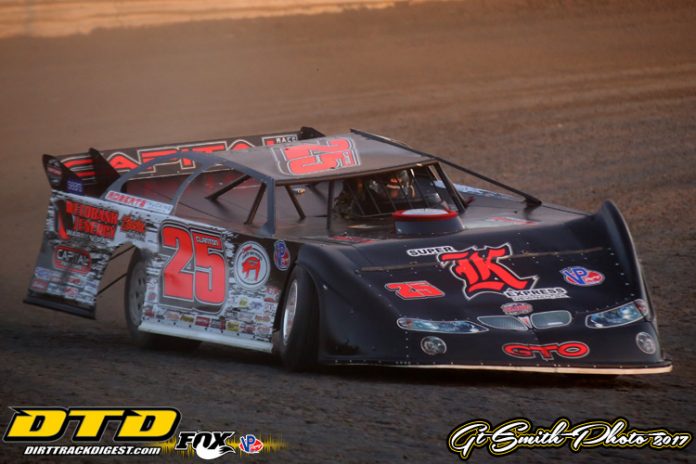 GRAND FORKS, ND – The World of Outlaws Craftsman® Late Model Series event at River Cities Speedway on Friday looked like it would end in similar fashion to the 2016 edition- a rainout. Although the two shows had the same beginning, this year had a different ending which resulted in Shane Clanton wheeling his way to his fourth Series win of the season.
“Mother nature threw us a curveball,” said Clanton. “We thought it was going to rain pretty hard and we’ve gotten stuck here in the pits before so everyone loaded up. Thanks to all of the fans for sticking it out and giving us a place to race. This is a cool place. It’s always racy so hats off to the guys that work on this track.”
Clanton defended the lead for all 50-laps from an exciting battle for second. Tyler Erb and Eric Wells ran door-to-door for majority of the feature. The no.91 almost gave up his top-three run on lap-20 when he nearly fell off of the track, as his right side tipped over the track ledge between turns three and four. Wells capitalized on Erb’s mistake, as he was finally able to make the pass for second.
Although he slowed, Erb didn’t miss a beat and began to chase back down the second position. All the while, Sheppard appeared on the scene wanting a piece of the action. The trio battled three-wide around the 3/10-mile bullring using every inch of the track trying to gain a little more momentum than the other.
Clanton was effortlessly working through lap traffic and continued widen his lead to 2.4 seconds by lap 30. Erb kicked his Rocket XR1 into another level and began digging for the race leader leaving Sheppard and Wells at his bumper. Clanton’s lead was cut down to only 1.015 before a caution fell for Chad Simpson with only three laps to go.
“I definitely didn’t want to see the caution,” said Erb. “I mean Shane did a great job. He got me there on the start and that’s what he had to do. I about turned over there in three and four and I had to fight to get back to second. Once we got to second there was about 10 to go and I really started pushing it. It just wasn’t meant to be tonight…We’ll just have to try again. I know we have about 20 more races so hopefully we can get a win by then.”
Sheppard made his way to the podium from a ninth position start.
“We just got behind there a little bit in qualifying and we’ve been messing around with some stuff on my car trying to get a little bit better,” said Sheppard. “We are putting in a lot of work on this thing and we just have to get where we can qualify up front and win a heat race again. We have a really awesome car every night in the feature we just have to work on our early program.”
During qualifying, 19 of the 33 Late Models entered at River Cities Speedway broke the existing track record which was set in 2014 by Rick Eckert with an 11.756 second lap time. Mike Marlar turned the best lap and now holds the new track record of 11.357.
“The racetrack was a lot better than I could have imaged it would be with all of the rain we got earlier,” said Sheppard. “It looked like it was going to be a little tough but they worked on it a little bit and they made it into an awesome racing surface.”
The next stop for the World of Outlaws Craftsman Late Model Series is on Wednesday, July 26 at Fayette County Speedway in Brownstown, IL before heading to the Prairie Dirt Classic for two days of action at Fairbury American Legion Speedway on July 28-29.
River Cities Speedway Results:
Feature: 1. 25- Shane Clanton[1]; 2. 91- Tyler Erb[2]; 3. 1- Brandon Sheppard[9]; 4. 157- Mike Marlar[8]; 5. 18- Eric Wells[3]; 6. 44- Chris Madden[7]; 7. 33x- Chad Mahder[5]; 8. 2c- Joey Coulter[11]; 9. 18c- Chase Junghans[18]; 10. 40B- Kyle Bronson[17]; 11. 7W- Ricky Weiss[10]; 12. 90- Lance Matthees[14]; 13. 28- Jimmy Mars[16]; 14. 9- Devin Moran[7]; 15. 1*- Chub Frank[4]; 16. 25s- Chad Simpson[13]; 17. 71- Dustin Strand[20]; 18. 99j- Frank Heckenast Jr[6]; 19. 14m- Morgan Bagley[23]; 20. 11- Pat Doar[19]; 21. 12s- Brad Seng[21]; 22. 58- A.J. Diemel[12]; 23. 15- Justin Duty[24]; 24. 7- Rick Eckert[15]
For complete results from the World of Outlaws Craftsman Late Model Series event at River Cities Speedway visit the results page.