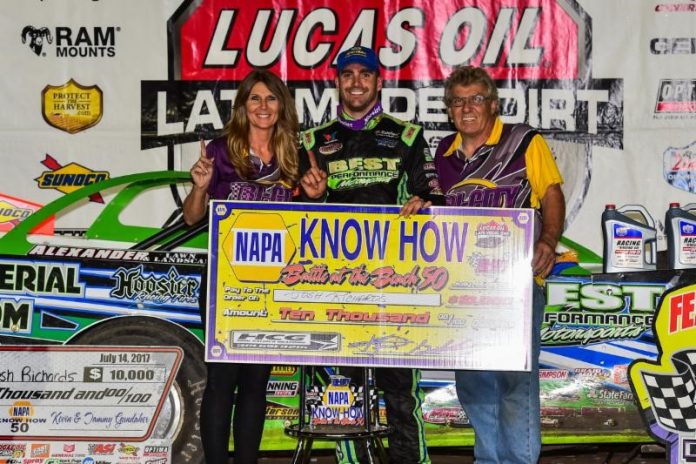 GRANITE CITY, IL – Josh Richards scored his first career Tri-City Speedway win on Friday night in the NAPA Know How 50 – Presented by Spray Nine. Richards fought off a late-race challenge by Tim McCreadie, who came home in second place after starting in seventh. Don O’Neal charged to a third-place finish, with Brian Shirley edging out Jimmy Owens on the final lap for to finish fourth.

In Lucas Oil Victory Lane for the sixth time this season, Richards was thrilled with another win, “This is only about the third or fourth time I have ever run here. There is no doubt that it’s a fun track to race on. There is plenty of room out there. I must thank my crew; Randall and Tyler; for the set-up on this Rocket Chassis. Our team gelled pretty quick and it’s only gotten better, especially in the last few weeks we have been running extremely well and a lot of that success goes to Andy Durham of Durham Race Engines,” said the 29-year-old.

With the victory, Richards extended his lead in the championship standings to 140 points over Scott Bloomquist.  “It got a bit slick out there for a while. I kept searching for a line that would work best for me. With not a lot of experience here, you just don’t know where to run at certain times during the race.   In this points deal, if you are going to win it, you should be consistent. You can’t run fifth every time out and expect to win a championship, you need to win races.”

Richards took the lead at the start of the main event and was never seriously challenged for that spot until with less than ten laps to go when McCreadie started to close the gap. McCreadie pulled to within a car length before a caution with five laps to go hurt his momentum. On the restart Richards pulled away from McCreadie and took the Best Performance entry to Victory Lane before a record-breaking crowd of spectators.

McCreadie was pleased to return to a podium finish. “We struggled in a few races last weekend, so we went back to the baseline we had been using, and it helped tremendously. The car was fast right from the start. At the start of the race, we were all running close together and there was some beating and banging, but that’s all a part of it. We got it going there once we cleared Jimmy [Owens] and I thought I had a shot at Josh, but he’s so tough to beat. To bring the Sweeteners Plus Longhorn home in second is definitely a step forward after last weekend.”


O’Neal; who started alongside his 16-year-old son Hudson; made a late-race charge inside the top five to garner a third-place finish in the Peak Antifreeze and Coolant entry for Clint Bowyer Racing. “We have been up and down, but the crew has worked their tails off, we aren’t going to quit, that’s for sure. The car was good all night and to come up through there like we did, we have to be pleased with that. A podium finish is great, but we are here to win races. This group of cars is just so tough to beat, but we’ll get there.”