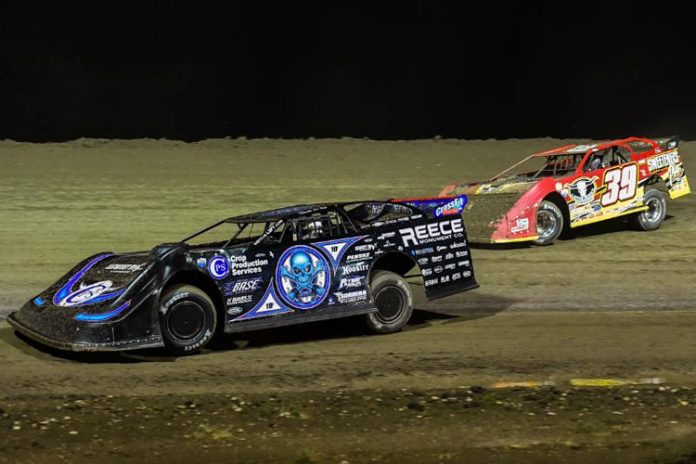 ABERDEEN, SD – The Lucas Oil Late Model Dirt Series’ first-ever visit to the Dakotas will go down as a memorable one. Scott Bloomquist survived several challenges to win Tuesday night at Brown County Speedway. Josh Richards came from the ninth starting spot to finish second with Tim McCreadie, who led a number of laps, ultimately came home in third. Completing the top five were Hudson O’Neal and Brandon Sheppard.

With his sixth LOLMDS win of the year, Bloomquist now has 584 career victories. Bloomquist took the lead for good with nine laps to go from McCreadie and then had to hold off a hard-charging Richards at the end.

“Man, it feels good to get back to victory lane. We have had trouble with the car vapor-locking. We dropped out of four races, and the decent point lead we had went south on us in a hurry with those. We are just glad to be back on top here tonight. The car ran well all night tonight. The Andy Durham engine was as smooth as it could be,” said the 53-year-old driver.

Bloomquist was able to find traction in the middle line and top line of the race track after he and McCreadie raced side-by-side for several laps in heavy lapped traffic. “Yes, I think that helped me. We pretty much stayed there the rest of the race. We might have went low a few times. There were a couple of rough spots, but all-in-all, the track was really good after they went out and worked on it.”

McCreadie jumped to the lead in his Sweeteners Plus, Longhorn and led the first 16 laps of the race. Bloomquist who started alongside McCreadie on the front row then caught McCreadie in traffic as he would take over the lead on lap 17. For the next 17 laps, the two put on a show for the lead going back and forth for the top spot. A caution on lap 34 allowed McCreadie some breathing room as all lapped cars restarted on the tail.


McCreadie led until lap 37 when Bloomquist forged ahead again. Bloomquist, McCreadie and fast-qualifier, Mike Marlar then staged a three-car battle for the lead, with Hudson O’Neal gaining on the leaders and bringing several others to join the fight for the lead with him. A caution on lap 41 set-up a nine-lap dash to the finish in which Bloomquist held off all challengers for the win.

Richards maintains his LOLMDS points lead with his second-place finish in his Best Performance Motorsports, Rocket. “It was a little hairy at the start. I got into Darrell [Lanigan] there and everybody was jammed up. It looked like it was going to be one-lane on the bottom, but the groove moved up fortunately for us. If we could have restart the race near the end I think we could have been good. We were just able to get by Mikey [Marlar] and Timmy [McCreadie] there at the end.”

McCreadie was credited with a third-place finish after Richards got around him late in the race. “We had a lot of fun out there. It got to be where I just couldn’t steer as well through the center. I was a little bit of a sitting duck. The car just wasn’t comfortable running up top.” 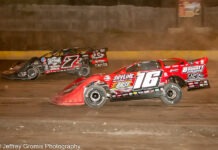