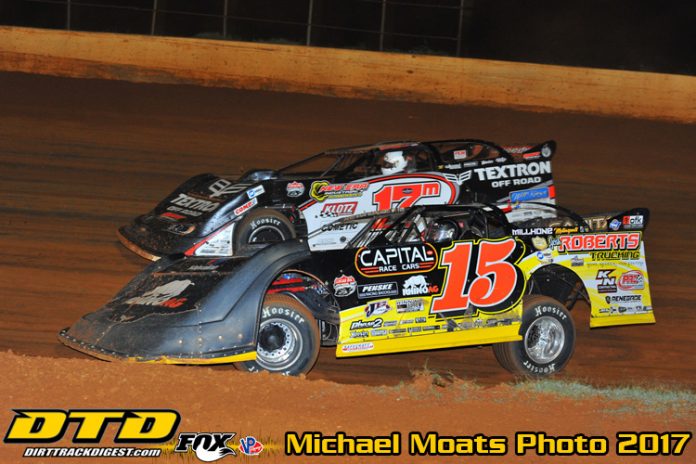 In the first heat of round one, Chad Simpson took the lead at the start of the race. Simpson led the entire distance for the victory in the Brinkman Motorsports, Liebe Trucking, Black Diamond entry. The current Lucas Oil Late Model Dirt Series points leader, Josh Richards – in only his second-ever appearance at I-80 Speedway – finished a close second. Earl Pearson Jr. was the big mover in this heat, as he came from ninth to finish in third.

In heat number two, the inaugural Silver Dollar Nationals winner, Don O’Neal took the lead at the start of the 12-lap race and went on unchallenged for the win in the Peak Antifreeze and Coolant, Club 29 entry for Clint Bowyer Dirt Motorsports. Shannon Babb came from the sixth starting spot to take second behind O’Neal. Brian Shirley roared from ninth to finish third.

The third heat of round one would go to veteran driver, Steve Francis, who started in third. Francis’ Rhino Ag, Josh Roberts Trucking, Capital Race Cars entry became the first driver from outside of the front row to win a heat race. Terry Phillips finished in second with 16-year-old, Hudson O’Neal coming home in third after starting in fifth.

Brian Shirley claimed the victory in heat number one of round two in his Bob Cullen, Thomason Express, Rocket Chassis. Steve Francis came from eighth to conclude a solid night, with Jason Krohn finishing in third.

The second heat of round two belonged to Tim McCreadie as he stormed on for an impressive win in the Sweeteners Plus, Pro Power Racing Engines, Longhorn Chassis. Kyle Berck, the winner on Thursday Night at I-80 Speedway in the Malvern Bank Super Late Model Series, narrowly held off Timothy Culp for second. Culp in his first-ever appearance at I-80 Speedway came from seventh to finish in third.

Scott Bloomquist took the lead at the start of heat number three and ran away with the win in the Crop Production Services, Reece Monument Company, Sweet-Bloomquist Race Car. Bloomquist, the only 2-time winner of the Silver Dollar Nationals, won his heat over Earl Pearson Jr. and Billy Moyer.

Rodney Sanders, who is leading the Lucas Oil MLRA Rookie of the Year chase, led all the way to capture heat four in the Swan Energy, MB Customs entry. Don O’Neal charged from the tenth starting spot to finish in second. Tad Pospisil was third.

The fifth and final heat of the night went to Brandon Sheppard in the Seubert Calf Ranches, Valvoline, Rocket House Car after overcoming problems in round one. Kyle Bronson in his first-ever I-80 Speedway appearance was second with Corey Zeitner taking third.