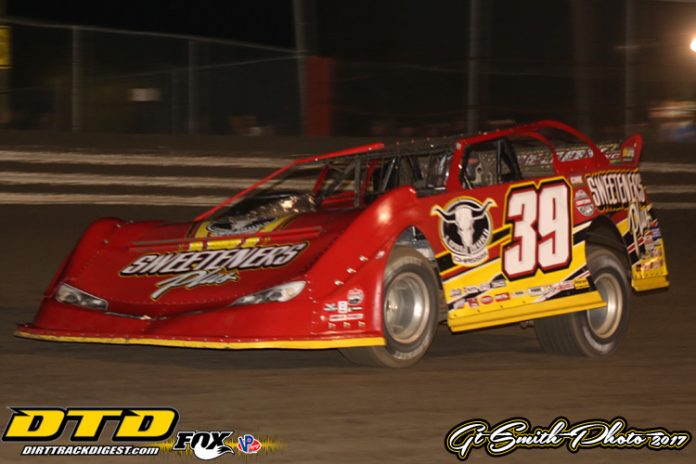 GREENWOOD, NE – Tim McCreadie took the lead on lap 21 and never looked back as he went on to the biggest win of his career on Saturday night at I-80 Speedway. The New York native earned $53,000 for his win in the 7th Annual Imperial Tile Silver Dollar Nationals. It was McCreadie’s fourth Lucas Oil Late Model Dirt Series win of the season. The event was also co-sanctioned with the Lucas Oil Midwest Latemodel Racing Association.

Polesitter, Steve Francis led the first eleven laps of the race until former event winner Don O’Neal took over the top spot. Just a few circuits later, O’Neal and second-place running Brian Shirley made contact in the middle of the backstretch as both cars got into the wall. Both cars kept going as Shirley suffered minimal damage, but O’Neal’s nose-piece was heavily damaged and he started to lose spots in the running order.

McCreadie, in the Sweeteners Plus, Longhorn Chassis, surged underneath both O’Neal and Shirley to take the lead on lap 21. McCreadie then had to hold off a hard-charging Brandon Sheppard, at the finish to earn the victory. Kyle Bronson placed third. Scott Bloomquist and Shannon Babb both rallied from the tail after making pit stops to finish fourth and fifth.

“Thanks to all the fans for coming out tonight. When I heard them say Sheppard was second on that final restart. I thought, WOW, because he started in the back. On that last restart, my crew motioned for me to go out further on the track from where I was running. They showed me where Brandon was running. Holy cow, $53,000, that’s a lot of money. After Don [O’Neal] and Shirley got together I just got by them. My car was good on the bottom anyway so I just stayed there.”

“Sometimes you have to have a little luck. I have only run this Pro Power motor twice before. Hats off to Bill Schlieper and everyone at Pro Power. I want to thank Longhorn Chassis, Bobby, Terry and Justin Labonte for giving me this opportunity to drive their car. This whole deal is amazing. We have had our growing pains, but everyone has stuck behind me.”


Sheppard needed to pass just one more car to make his night complete, but instead, he came up just short in second place after starting 32nd on the grid. “We crashed the car pretty good in the heat race last night. We just put it all behind us. We had a pretty good racecar tonight, we got behind early on the weekend, but it just shows how resilient we are to run like we did tonight,” said the driver of the Seubert Calf Ranches, Rocket House Car.

Bronson, in the Brandon Ford, Rocket Chassis, was pleased with his podium finish in his first trip to I-80 Speedway. “To do what we did with this level competition tells us how far we have come as a team. I want to thank my crew. They have busted their rear ends this entire month we have been gone. The tires got hot and I slowed down a little, then I would get going again once they cooled off. For our first time here, we put on a good show.”