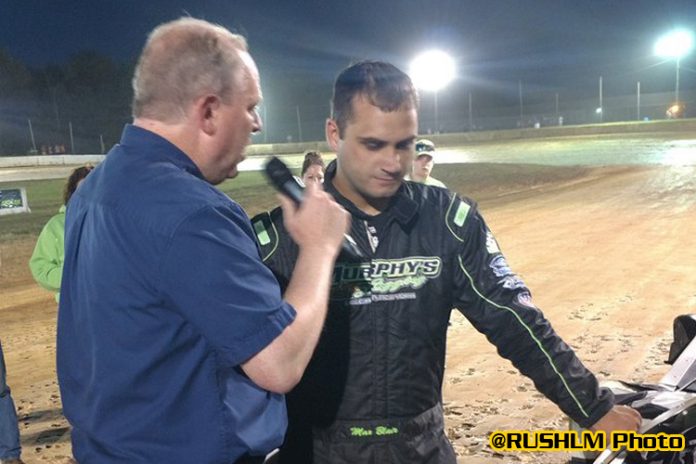 ERIE, PA – The Sweeney Chevrolet Buick GMC RUSH Dirt Late Model Touring Series powered by Pace Performance headed to Eriez Speedway on a beautiful Sunday evening. Race #9 of the 2017 season was to be the second “Marquee” event of the year at the racey, 3/8-mile northwest Pennsylvania speedway; however, the May 28 event was rained out. Sunday attracted 31 teams from all over Pennsylvania, Ohio, New York, and West Virginia to compete.

2015 Sweeney Tour Champion, Max Blair, made just his second start of the season a winning one by capturing the 30-lap $2,000 to-win feature. Blair took the lead early on from Chad Wright then withstood challenges from both him and a late race charge by Russell King to become the sixth different winner in nine events this season. Max has now won four of the five Sweeney Tour events at Eriez over the past three seasons with his father Rob winning the other one in a substitution role! Blair was also named the Maxima Racing Oil “Maximum Performance” award winner as he nearly swept the night setting fast time, winning his heat, the feature, but had a second place dash finish. All told, Blair won $2,125 in cash plus contingencies.

“Russ (King) is one of the best in our area and anytime you line up side-by-side with him you have to worry about it,” expressed the 27-year-old Centerville, Pa. driver. “Chad (Wright) has been real good all year and is one of my best friends. He’s one of our Team Blair Racing cars. It’s a lot of fun getting to race with him. I’m not sure what happened to him there. It’s too bad he didn’t get the finish he deserved. It’s been an unreal season. I haven’t been able to race as many of these Tour races as I would have liked to due to the Super Late Model commitments, but I always enjoy racing them when I can and look forward to the next one.”

Wright earned the feature pole via his K&N Dash win and immediately raced to the early lead over Blair and fourth starting King. Jason Genco was on the move from the sixth starting spot as he passed Bryce Davis on the opening lap then Matt Latta for fourth on lap two. Genco moved in on King for the battle for third on lap five, while up ahead Blair pulled even with Wright. Blair would make his winning move on lap six driving to the inside of Wright in turns three and four.


Blair was in traffic on lap eight and two laps later Wright closed back in; meanwhile, Davis, the Sweeney Tour point leader, caught King and Genco in the race for third on lap 12. Genco nosed ahead of King to take third on lap 13. After Blair opened up a little ground, Wright was right on the leader on lap 18 and pulled alongside on lap 19; however, a caution for Hunter Hulley may have taken away Wright’s shot at regaining the lead.

Blair chose the bottom on the double file restart and took off in the lead; meanwhile, King found traction on the outside as he drove around Genco and Wright in turns one and two for second. The top three of Blair, King, and Wright began to distance themselves from the field before a spin by Latta slowed action for the second time of the event- this time with 21 laps scored.

When racing resumed, King continued to hound Blair, but was unable to find a way by while Wright kept the pressure on King. On lap 26, King changed lanes as he tried the middle entering turn one, but Wright had a run on the bottom and ran out of real estate as both racers were fighting for the same spot on the track with Wright spinning. Wright was awarded the TBM Brakes “Tough Brake of the Night” distinction.

King earned $1,000 for his runner-up finish in his fourth Sweeney Tour start of the season as he’s yet to finish worse than fourth. “I don’t like making excuses but he has more laps around this place than I do,” explained the Bristolville, Ohio driver. “We were pretty decent and I had the outside going, but I made a mistake when I touched his quarter panel. We had that caution and someone must have told him because he backed up his entry wider and kind of blocked mine. His car was good and he’s the guy to beat. If you want to be that guy you have to come up here and whip his ass. That’s why we came up here so we’ll keep on trying.”

Blair set fast time in FK Rod Ends “Shock the Clock” Qualifying with a lap of 16.129 and also won the first FK Rod Ends Heat Races to add an additional $125. Other $25 FK Rod Ends Heat Race winners were King, Waters, and Davis. Wright’s first K&N “Cold Air Induction” Dash win of the season earned him a $100 K&N certificate over Blair, who received a $50 K&N certificate. Latta and King earned an extra $25 cash for their third and fourth place dash finishes.

The Sweeney Tour will resume action on Saturday, August 12 for the “Jook George Memorial” at Pittsburgh’s PA Motor Speedway in Imperial, Pa. paying a season high minimum $4,010 to-win. That will be followed by the McKean County Fair event on Thursday, August 17 in East Smethport, Pa. for a $1,500 to-win “Platinum” Event.