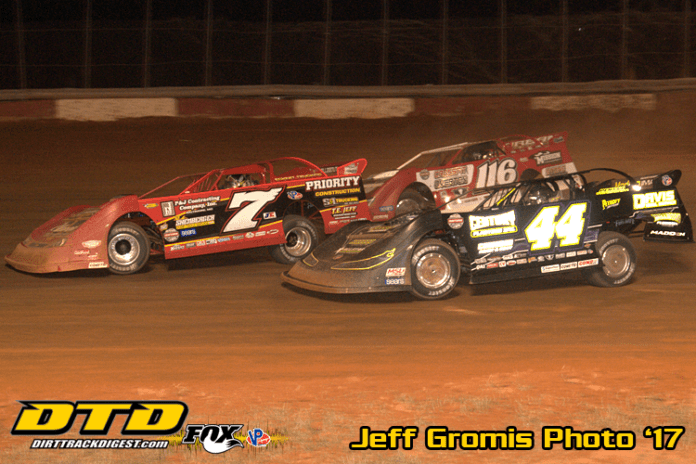 CONCORD, NC – The World of Outlaws Craftsman® Late Model Series is getting prepared for the busiest week of the 2017 season- five nights of racing in five days at three different tracks all within the state of Wisconsin.
The Series will start the action-packed week with its first ever appearance at Oshkosh SpeedZone Raceway on Aug. 1, followed by Shawano Speedway on Aug. 2, and top off the week with the highest paying Outlaws show of the year, the $50,000-to-win USA Nationals at Cedar Lake Speedway on Aug. 3-5.
Chris Madden has only ever ventured Northwest to Wisconsin from his Gray Court, SC home to race twice before. Both races took place more than 1,000 miles from his stomping grounds at the 3/8-mile Cedar Lake Speedway in 2007 and 2009.
In his first year running with a national touring Series, Madden explained that 90% of the tracks the Series has traveled to are entirely new to him. Despite not having experience on the tracks, Madden currently sits second in points in the 2017 Series Points Standings with three wins, 13 top-five and 19 top-ten performances.
“We have a pretty good baseline, and we’ve been able to be pretty competitive everywhere we’ve been,” said Madden. “We start there, and then we just try to tune it from there based on that night’s track conditions. Although there are a lot of new tracks for me, it’s not all completely new because the surfaces are similar to something I’ve run on before.”
OshKosh SpeedZone Raceway and Shawano Speedway join Madden’s long list of new tracks he’s experienced in the 2017 season.
“I’ve watched some videos and have talked to some people, and both OshKosh and Shawano sound like they fit my driving style and characteristics,” said Madden. “With my driving style I like to be more on hard tires, and I like to drive on tracks more similar to asphalt instead of sideways. The racetracks where it’s really crumby and dirty and have to run sideways and wheel spin there’s a little trouble there until it comes later in the night when we start working our way back to the front.”
Rookie of the Year Contender Devin Moran has also visited several new tracks in 2017 as the Series has taken him to parts of the country the 22-year-old has never seen before. For one of the first times this season, Moran has turned more laps on a track than many of his fellow Outlaws. When the Series pulls in to OshKosh SpeedZone Raceway it will be somewhat familiar territory for the driver of the No. 9 machine. His last visit to the third-mile oval was in 2015 with the Lucas Oil Late Model Series where he finished fourth.
Tickets are currently available for the World of Outlaws Craftsman Late Model Series event at Cedar Lake Speedway on Aug. 3-5 here. Tickets for the Outlaw event at OshKosh SpeedZone Raceway on Aug. 1 and Shawano Speedway on Aug. 2 will be available at the ticket booth on the day of the event.