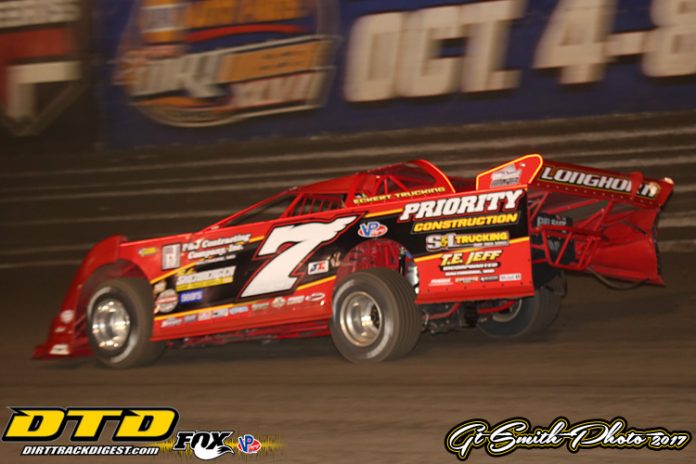 Contact: Kayla May (World of Outlaws Craftsman Late Model Series PR)
SHAWANO, WI – Rick Eckert closed the book on an overdue victory at Shawano Speedway on Wednesday night by leading flag-to-flag to claim his second World of Outlaws Craftsman® Late Model Series win of the 2017 season.
The Series has consecutively visited the half-mile dirt track for the past eight years. Among all eight shows, Eckert holds the most consistent runs with six top-five finishes of the eight Series races at Shawano. He has only ever finished outside of the top-10 one time where he placed 11th in the 2010 shootout.
“I’ve always been fond of this place but I don’t think I’ve ever won here so it’s good to get a win here,” said Eckert. “It’s great to see this crowd of fans here. That is awesome. I want to thank all of the fans for coming out. The race track was really good and the rain held off so all of that was good.”
Earlier in the day it looked as if rain might win the show but Mother Nature had different plans as nothing more than gloomy skies blanketed over Shawano, WI.
Eckert started on the pole next to Don O’Neal for the 50-lap showdown. The first lap saw O’Neal pass for the lead down the backstretch but by turn four Eckert was back in control. Eckert was able to pull away from O’Neal’s grasp by nearly 2 seconds by lap 15. In the following four laps O’Neal was able to cut Eckert’s lead down to only .333 seconds but the No. 7 Paul Crowl machine was no match as he was able to pull away.
Eckert defended his lead from two cautions which reset his gains back to zero. Chris Madden was the biggest benefactor from the cautions as he was able to pass O’Neal for second on lap 34 after falling back to sixth during the first half of the event.
“Man, this redraw is killing us,” said Madden on his third position start in the feature. “If we could just ever put this thing on the front row, I think we could get quite a few more wins than what we have been getting. Awesome car tonight to be able to get through the dirty air at this big ol’ place and get to second. We closed in on him by about a second and a half on those last seven or eight laps. We definitely had a good piece tonight and no complaints.”
O’Neal settled for third by the time the checkers fell collecting his second podium finish in a row with the Series.
“I just got so tight after that last caution,” said O’Neal. “We just got to work on the steering part a little bit and if we get that down I think we really got something. We are getting there but man we just want to get this Peak car to victory lane bad.”
The World of Outlaws Craftsman Late Model Series hits the road towards Cedar Lake Speedway for USA Nationals for the next three nights to wrap up the Wisconsin swing. On Saturday night, the Outlaws have their biggest payout of the season with $50,000-to-win.
Additional Race Notes:
Eckert’s last win with the Series was on Feb. 17 at Screven Motorsports Complex for the season opener.
Brandon Sheppard hit some bad luck today during his heat race with a right rear flat tire on lap two. The Rocket1 team quickly got it fixed and Sheppard headed back out onto the track to start tail. He finished fifth in the heat to collect a transfer position into the feature but would start 14th. During the feature, Sheppard made up six positions to finish among the top-10.
Shawano Speedway Results:
Craftsman Club Feature: 1. 7- Rick Eckert[1]; 2. 44- Chris Madden[3]; 3. 5- Don O’Neal[2]; 4. 25- Shane Clanton[5]; 5. 157- Mike Marlar[8]; 6. 14- Darrell Lanigan[7]; 7. 32- Chris Simpson[4]; 8. 1- Brandon Sheppard[14]; 9. 9- Devin Moran[12]; 10. 14m- Morgan Bagley[13]; 11. 28- Jimmy Mars[15]; 12. 91- Tyler Erb[20]; 13. 40B- Kyle Bronson[10]; 14. 18- Eric Wells[23]; 15. 28e- Dennis Erb Jr[19]; 16. 16- Tyler Bruening[22]; 17. 7R- Kent Robinson[16]; 18. 99jr- Frank Heckenast Jr[9]; 19. 18c- Chase Junghans[18]; 20. 15- Nick Anvelink[19]; 21. 1P- Earl Pearson Jr[6]; 22. 10- Paul Parker[21]; 23. 1*- Chub Frank[24]; 24. 58- A.J. Diemel[11]
For complete results from the World of Outlaws Craftsman Late Model Series event at Shawano Speedway visit the results page.